Carolyn’s
latest release is My Immortal Assassin.  This is the 3rd book in her My
Immortal series.  If you are interested in winning a copy of this book
be sure to check out the details on how to enter to win a copy of this
book at the end of the post. 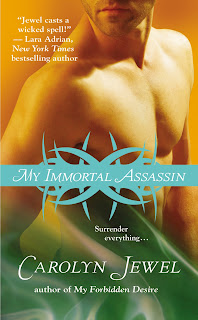 Revenge. It’s all Grayson Spencer wants. Christophe dit Menart, a
human with dark magical powers, destroyed the life she loved. She wants
the pleasure of killing him, no matter the cost to her. If not for
Durian, a dangerously sexy demon fiend charged with keeping Christophe
alive, she would have succeeded, too. Now, she’s certain all hope is
gone. But he has a plan and an offer she can’t resist…

Durian has spent his life as a trained and sanctioned assassin. His
duty: to enforce the laws against demons harming humans. He’s always
prided himself on staying out of the fray, carrying out his orders and
honoring his fealty to his warlord, but never getting attached. Never
until Grayson, a spunky and determined woman clearly gifted with magic
herself. He convinces her to swear fealty to him so he can protect her
and teach her to use her magic to taste the revenge she so desperately
wants.

They’re soon bound together in a forbidden desire–a dangerous
passion that calls into question Durian’s oath of loyalty to his
warlord. When he refuses to return her to Christophe, his disobedience
threatens to inflame the tumultuous war between demons and the magekind.
Can they–and their love–survive?

Other book in this series: 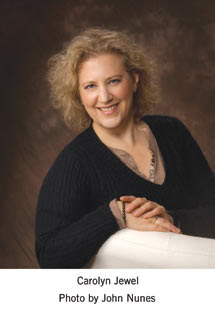 Carolyn writes because she’s a bit off that way. She loves history,
action movies, scary stories and fine chocolate. She is also a Microsoft
SQL Server Database Administrator. This is a geek job that’s not nearly
as exciting as writing. She lives in Northern California with her son
and several critters. A recent switch from PC to Mac allowed her to glue
paper fangs on her MacBook Pro and name it MacFang. She loves to hear
from readers, so don’t hesitate to email her.
Five Fun Facts about Carolyn Jewel:
1. Carolyn has lived in, near or walked around all the locations used in her book. Except for St. Francis Woods, which she only drove around.
2. Even with the invention of the GPS, Carolyn’s difficulty distinguishing left from right means she has been lost in every single city she has ever been in. Every. Single. One. (see #1 above)
3. When Carolyn lived in San Francisco, her apartment building was three blocks from Danielle Steel’s house. One time she counted 10 cars at the house and there was room for more.

4. On her son’s second Halloween, she made him a devil costume (cape, tail and horns, sewn by hand because she didn’t own a sewing machine and if she did, it would probably be a disaster.) He did not like his devil horns so eventually she wore them herself.
5. Carolyn’s favorite color is gray, and she has spent untold minutes wondering what’s wrong with her that she doesn’t like a feistier color better.
You can connect and find out more about Carolyn at:
Visit CarolynJewel.com
Carolyn on Facebook
Follow @CJewel on Twitter
Friend Carolyn on MySpace

Now on to the Giveaway

Hachette Book Group, Inc has graciously provided me with three copies of this book to giveaway. Here are the rules!