Tonight is the premiere of the  prequel Spartacus: Gods of the Arena. The prequel will go back and tell the story of the rise of the House of Batiatus and it’s champions before the arrival of Spartacus. The delicious John Hannah returns to reprise his role as the owner of the gladiators, Batiatus.  Lucy Lawless is back as Lucretia the wife of Batiatus.  We’ll see some familiar faces returning and some new characters introduced in this prequel.

If you missed it last year Starz premiered their new TV series Spartacus: Blood and Sand which starred Andy Whitfield as the gladiator Spartacus.  Click this link and you can read all about my love for the first season Spartacus: Blood and Sand and how the prequel Spartacus: Gods of the Arena came to be!  I have my DVR set to record this series!  I can’t wait to see all the bloody fight scenes, the eye candies, the ruthless and power of the inhabitants of the luda and revisit the ancient city of Capua.

If you haven’t seen season 1 definitely check it out!  For now here’s a peek at the prequel Spartacus: Gods of the Arena premiering tonight! 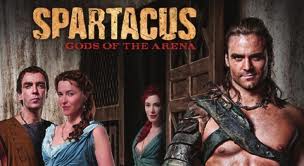 2 Responses to “JUPITER’S COCK…..SPARTACUS IS BACK! SORTA?”