Good morning everyone!  I have some special guest today.  The 5 Cupids of eTreasures Publishing are joining us today to discuss what they were up to this year during Valentines Day.  They’ve been known to get wild when gathered together so anything can happen.  The interview today is being conducted by Cupid X.
************************** 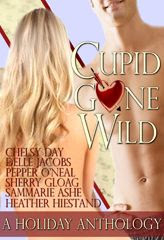 Sometimes true love needs help. Five Cupids take on a challenge this Valentine’s season: To match the most unlikely couple they can find.

One arrow straight through two chests was all it took for carpenter/painter Dan, and trust fund baby Jane to go from making each other crazy, to being crazy about each other. The match that won Cupid X the Challenge in 1981…

White witch Kole Trillion has a successful business, customers who swear by her potions and spells. Unfortunately, she also has the bad luck to fall in love with a man who doesn’t believe in magic, Police Detective Gage Corwin.

The Bachelor by Heather Hiestand:

Abbie Harper didn’t mean to buy the date, but one look at Jake Cordalys and she’s ready for red-hot romance. Jake is not looking for something complicated, but when Cupid is involved, all plans go out the window and romance flies in.

The Boss Wore Red by Delle Jacobs and SamMarie Ashe:

For city fashionista Alexandria Bergstrom, there’s nothing worse than learning her crazy parents’ past, unless it’s having to re-live it herself on the ranch she’s inherited. It’s the worst possible time for her heart to tumble, especially for hunky, city-hating ranch manager Clint Riordan. But does her heart listen? That’s what Cupids are for…

The Wrong Target by Sherry Gloag:

Headmistress, Tina Blackberry, and businessman Ryan Thomas, can’t control events after Ryan’s daughter steals his coveted golden arrow and takes it to school, But put Cupid on the job and nothing can go wrong, or can it?

The Hollywood Hookup by Chelsy Day:

Actor Casey Jones and stunt woman Sandra Benson have a history. Can Cupid get them past the animosity and prove that true love in Hollywood is NOT impossible?

Cupid X: Welcome Readers! We are back with the five Cupids of the eTreasures Publishing Cupid Gone Wild Series. The leak on the 2011 Cupid Challenge and the existence of Cupids in general has raised some sticky questions. All of you made tough matches, you are all fighting to be acknowledged as the successful matchmaker of the most unlikely couple, and everyone wants to know what lengths you might be willing to go to to win. So at what point does a cupid leave the room? Have you ever gotten an eyeful?

Cupid HH of The Hollywood HookUp replied while fighting not to blush. HH: No comment.
Cupid B of The Bachelor takes up after an awkward pause. B: Don’t ask, don’t tell.

Senior Cupid X: The following message is brought to you by our lovely hostess As the Page Turns. To show our appreciation the Cupids will be giving away 2 copies of the Cupid Gone Wild Anthology. Also the Cupids will be here to comment and continue their conversation. Feel free to ask questions or just leave a message for your chance to win an e-book. Also as the voting is now up to the public for the 2011 Cupid Challenge you can vote for the most deserving Cupid and be entered to WIN A KINDLE! Just visit the eTreasures Blog and vote.

The next stop on our Blog Tour is Cheeky Reads– the question – “Your biggest mistake? What have you had to recover from?”
If you missed the earlier stops on the Cupid Tour go back to the beginning – Visit our first stop at:
**************************
Thanks Cupid X for that insightful interview!  Things were getting a bit tense there.  I was afraid for a moment that it was about to get ugly!  Thank you to the 5 Cupids and eTreasures Publishing for joining us here today.  Well if you guys are interested in getting a copy of this tell all anthology HERE ARE THE RULES:
Pimp This: