Good morning peeps!  I love books set in the highlands.  There is just something sexy about those rugged men of Scotland.  Is it the kilt, the sexy Scottish accent, the way they can handle a sword :), the love for their country and ways??  Anyway I had to jump at the chance to join this tour today.  How cute is that From Scotland with Love!  Love it.  Anywhoo–Kira Morgan one of the authors participating in this tour was kind enough to answer my question: WHY DO YOU THINK THE ROMANCE GENRE HAS SUCH A
FASCINATION WITH HIGHLANDER HEROES?

First, let me say I’m delighted to be here among fellow fans of historical romance!

Whether your reading taste runs to Regencies or Westerns…the War of the Roses or the War Between the States…ladies in hoop skirts or men in tights…almost everyone has a soft spot for stories set in Scotland.What’s up with that?Why do we love Highland heroes?Is it possible that Gerard Butler alone is responsible for the allure of Scotsmen?  Or would we sigh over anyone in a kilt?I have a theory.It isn’t really about the kilt.  But it has something to do with the kilt’s significance.  You see, the kilt is sort of like the historical equivalent of your dad’s favorite power tool—the one he swears can do anything from dismantling the garbage disposal to rebuilding a car.Any Highlander worth his sporran can use his plaid against the fierce Scots weather, bed down in it at night, then sweep it up and sling it around his hips in the morning.  He can also cook an oatcake on his shield, bathe in a snow-fed stream, and wield a claymore, the biggest two-handed blade known to man.In short, he’s a man’s man.  No one is tougher, brasher, franker, brawnier.Living in the Highlands is hard.  The wind is mostly cruel.  The soil is mostly rock.  The cottages are mostly isolated.  It takes a special breed of man to survive in that kind of environment.The Highlander is that man—as tough as Scots thistle—and he’s as unapologetically macho as they come.So why—in an age of enlightened feminism—are we attracted to such an unlikely hero?  What is it about that rugged mountain man with the shaggy hair, a scruffy chin, bulging calves, and a snarl of a Scottish brogue that sets our hearts racing?I think the fact that women ARE more empowered makes them crave more powerful heroes.  A blatantly masculine Highlander is the perfect foil for a self-assured heroine.  Nothing sets up more excitement, conflict, and sexual tension than pitting a woman who insists on having her way against a man who’s used to taking what he wants.In my book, SEDUCED BY DESIRE, Drew MacAdam may be a counterfeit Scot, but he’s fully aware of the baggage that comes with the role.  He knows a Highlander is larger than life, walks with a cocky swagger, and is more than a wee bit rough around the edges.  It’s a good thing, too, or else he’d be mowed down by the heroine—fiery-tempered, trews-wearing, kick-arse Lowlander, Josselin Ancrum.See if SEDUCED BY DESIRE keeps you up all night, and let me know if “Highlander” Drew puts YOUR trews in a twist!  Friend me at www.facebook.com/kiramorganauthor.  Follow me on www.twitter.com/kira_morgan.  And find me at www.glynnis.net/kiramorgan, where you can enter a sweepstakes to win the silver thimble that Drew gives to Jossy!
How about you?  What is it about hunky Highland heroes that sets your heart a-flutter?

**********************************
What a great post Kira.  I like your logic!  You said “Gerald Butler” and I just melted in a puddle over here!  I love me some Gerald!  Yummy!  Kira and Amanda Scott are the two authors on this tour today that was brought to you by the awesome folks at Forever Romance an affiliate of Grand Central Publishing.
Courtesy of the fine folks mentioned above we have Kira and Amanda’s latest releases to giveaway!  Three copies of each book to giveaway in fact!  That means six winners!  Whoo-hoo!  If you are interested in winning HERE ARE THE RULES AND DETAILS:

Here are more details on the books up for grab: 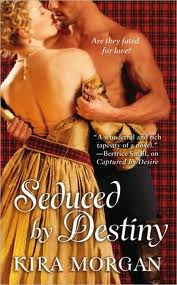 Click HERE to read an excerpt of this book

Cover Blurb:
A woman seeking vengeance for her mother’s death.
Josselin
Ancrum–a beautiful war orphan raised in a man’s world–leaps at the
chance to retaliate against the English by becoming a spy for the newly
crowned Scots Queen Mary.  But an irresistibly handsome suspect charms
his way into her heart, and she’s soon up to her pretty neck in royal
intrigue.

A man trying to forget his father’s sin.
Andrew
Armstrong–a master swordsman with no appetite for battle–flees his
native England to live quietly among the enemy as Highlander Drew
MacAdam.  But when the lovely and spirited Josselin threatens Drew’s
peace–stirring his blood and inviting danger, the brawny warrior can’t
resist coming to her rescue.

Drawn together by fate, Drew and
Josselin are swept up in their growing desires and the designs of their
warring queens, until they uncover the terrible secret that binds their
souls.

Are these star-crossed lovers doomed by their tragic past, or will they be… 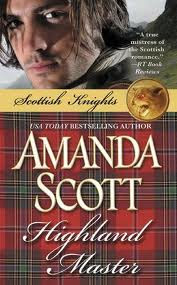 Click HERE to read the first Chapter of this book

Cover Blurb:
Known as the Mackintosh
“Wildcat,” Lady Catriona would do anything to defend her clan. But when she discovers a
wounded warrior on her family’s land, Catriona’s devotion is tested.
Igniting her passions with the softest touch, this powerful stranger tempts her in
the most intimate way-and keeps a dangerous secret…
In the midst of war, Sir Finlagh
Cameron swore an oath of vengeance against the Mackintosh chieftain. Now face-to-face with his enemy’s daughter, Fin of the Battles falters. Her wild beauty
and spirit arouse a hunger the
battle-weary warrior can’t conquer,
and provoke a terrifying choice.
Surrendering to desire would break
his vow. Revenge would threaten Catriona’s life. For their love to
triumph, the two must do the unthinkable: challenge the fierce loyalties that
rule the knights and clans of Scotland.

24 Responses to “FROM SCOTLAND, WITH LOVE TOUR – GUEST POST BY KIRA MORGAN”