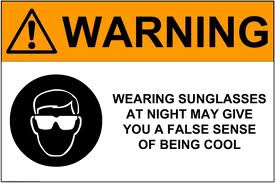 You’re probably wondering what does sunglasses at night and book purchasing have to do with one another?  If you are thinking nothing, you’d be right my friends.  These were just two things I wanted to talk about today but I didn’t want to do two post so I thought I’d combine them.
So I was watching TV last night and saw the Miller Lite commercial where the guy is wearing the sunglasses at the club and it made me think back to my party club days.  I remember thinking how the hell did they see where they were going?  Did these guys know something we non night sunglasses wearing people didn’t know?  Did they have some kind of extra power cause they could wear dark sunglasses at night and still maneuver around without running into things?  And why did they always seem cocky?  Years later and I still wonder about this.  Any way the point of all this was I really love the song in that commercial.  The song made me want to get up and put on my own pair of sunglasses and go back to the 80’s with a little Corey Hart.  So go put your sunglasses on and enjoy the song and the rest of the post!

Yesterday was a big book release day for me.  So many great books that I had been eagerly waiting for finally came out yesterday.  I purchased these following books.  I can’t wait to read them.  What did you buy yesterday?  Any books I missed out on?

Fame has its perks…
Reluctantly famous, First Officer
Cole Langston finds being in the spotlight has its advantages-until he
meets Olivia. Having women throw themselves at him everywhere he goes
becomes a serious problem when he’s trying to convince her she’s the
one…

And its price…
Olivia has trouble trusting
a guy like Cole, and everywhere she turns she sees reasons to run. But
he’s the only man who’s ever seemed to understand her as an artist and
as a woman…
Cole is working overtime to prove to Olivia that
he’s serious, but her deep seated mistrust and his entourage of
unwelcomed fans may be more than they can overcome…

Football pro Mick Riley is an all-star, both on the
field and in the bedroom. But a sexy, determinedly single mom just might
be the one to throw him off his game…
For years Mick has been taking full advantage of the life
available to a pro athlete: fame, fortune, and a different girl in every
city. But when he meets and beds confident, beautiful event planner Tara Lincoln,
he wants much more than the typical one-night stand. Too bad Tara’s not
interested in getting to know football’s most notorious playboy any
better.
As the single mother of a teenage son, the last thing Tara
needs is the jet-set lifestyle of Mick Riley; even though their steamy
and passionate one-night stand was unforgettable. Tara’s life is
complicated enough without being thrust into the spotlight as Mick’s
latest girl du jour. Tara played the game of love once and lost big, and
she doesn’t intend to put herself out there again, especially with a
heartbreaker like Mick.
But when Mick sets his mind to win, nothing will stop him. And he has the perfect play in mind. He let her go once. This time he’s playing for keeps.

Callie Colter once chased
sunsets all over the world. Until Max. Together they were a perfect
storm of desire, and she reveled in the beautiful burn. Then he
disappeared, and the betrayal drove her home to lick her wounds.

Who knew he’d have the gall to show his face in her brother’s bar.

Max Wilder figures he deserves
Callie’s right hook to the jaw, but it changes nothing. He had his
reasons for pursuing her across Europe, for making her fall in love with
him. But when she took everything he gave and offered more, she changed all the rules. He had no choice in leaving her, but now he’s back. This time for the right reasons.

Callie is angry and hurt but powerless against Max’s relentless
onslaught. He’ll settle for nothing less than her complete surrender—and
her love. Only when she’s back in his arms will he be truly happy. And
the damning truth can stay safely tucked away.

Except the truth has a way of creeping to the surface, and now Max is out of second chances.

This alpha male is going to bring out her wild side…
Sunshine, Idaho, is a small and sunny town—the perfect home for man
and beast. Well, maybe not for man, as pilot-for-hire Brady Miller
discovers when his truck is rear-ended by what appears to be Noah’s Ark.
The co-owner of the town’s only kennel, Lilah Young has good reason
to be distracted behind the wheel—there are puppies, a piglet, and a
duck in her Jeep. But, she doesn’t find it hard to focus on the angry,
gorgeous stranger she’s collided with.
Lilah has lived in Sunshine all her life, and though Brady is just
passing through, he has her abandoning her instincts and giving in to a
primal desire. It’s Brady’s nature to resist being tied down, but
there’s something about Lilah and her menagerie—both animal and
human—that keeps him coming back for more…