Ripe for Pleasure is the first book in a new series called the League of Second Sons series by Isobel Carr. Isobel is not a new author she has written books under the name Kalen Hughes. This book was a very nice start to this series and I can’t wait to find out more about the other second sons.  A review will be posted later tonight.  I also have to point out how much I love the cover. The title the cover certainly fits this book. See below for more details about the series courtesy of Isobel’s site!

The League of Second Sons…
Do you ever wonder how all those “spares” get on after they’ve
been made redundant when their elder brother produces an heir? I most
certainly do. In fact, I’ve always been intrigued by people who take
charge, go out on a limb, and make lemonade when the universe keeps
handing them lemons. So it comes as little surprise that my series—The League of Second Sons—is
about younger sons of the nobility, the untraditional women they fall
in love with, and what it takes for two people who aren’t going to
inherit everything to make a life for themselves.
The League of Second Sons
is a secret club for younger sons who’ve banded together to help one
another seize whatever life offers them and make the most of it. These
are the men who actually run England. They’re elected to the House of
Commons, they run their family estates, they’re the traditional family
sacrifice to the military (the Duke of Wellington and Lord Nelson were
both younger sons). They work—in a gentlemanly manner—for what they’ve
got and what they want. They’re hungry, in a way that an eldest son,
destined for fortune and title, never can be.

The Charter of The League of Second Sons

We are MPs and Diplomats, Sailors and Curates, Barristers and
Explorers, Adventurers and Soldiers. Our Fathers and Brothers may rule
the World, but We run it. For this Service to God, Country and Family,
We will have Our Due.

Formed this day, 17 May 1755. All Members to Swear to Aid
their Fellows in their Endeavors, Accompany them on their Quests, and
Promote their Causes where they be Just.

Addendum, 14 April 1756. Any rotter who outlives his elder brother to become heir apparent
to a duke
is hereby expelled.

Addendum, 15 Sept 1768. All younger brothers to be admitted without prejudice in favor of the second.

Now take a look at that cover and a peek at a chapter in the book! 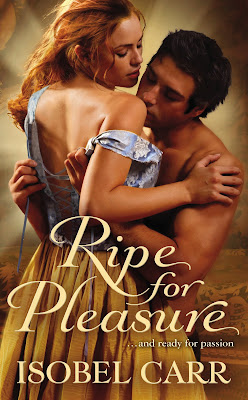 Book 1 of The League of Second Sons

Second in line, first in love

A secret society of younger
sons, sworn to aid and abet each other, no matter the scandal or
cost…. Their fathers and brothers may rule the world, but they run it .
. . and when it comes to passion, they refuse to accept second best.

Searching for hidden treasure,
finding forbidden fantasy.
London’s most sensual former courtesan, Viola Whedon, is incapable of being seduced-she does
the seducing. Until she meets Leonidas Vaughn. Her salacious memoirs
have made her the target of half the lords in England, and Vaughn is the
only man she can turn to. When he promises to protect her-and to make
her beg for his touch-the alluring beauty finds both offers impossible
to refuse.

Leonidas Vaughn secretly believes Viola possesses a
fortune given to his family by the King of France. So the strong and
sexy Vaughn charms his way into Viola’s life . . . and her bed. But when
their arrangement is consummated, he’ll experience pleasure far beyond
his wildest fantasies-and realize his heart may need the most protection
of all.

*************************************
Do you wanna a copy? Are you intrigued now? Well lucky you, peeps!  I have copies to offer as a giveaway today courtesy of the wonderful and awesome peeps at Forever Romance an affiliate of Grand Central Publishing.  THREE lucky readers of the blog could win a copy of Ripe for Pleasure.  If you are interested in winning check out the rules and details below:
Rules and Details for Giveaway: