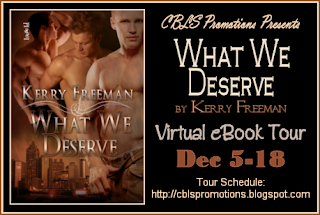 Hello ATPT peeps!  Please help me welcome author Kerry Freeman to the blog today.  I had the opportunity to read a copy of What we Deserve and really enjoyed it!  I’m going to give one ebook copy of this book away, so stick around after the guest post to enter and win a copy!  Now here is Kerry!

Writing about the South

Thanks so much to Ing for having me on the blog today. When people ask about me, the first two things I usually say are that I’m a geek and I’m Southern. All my stories are set in the South. Whether it’s explicitly stated or not, the men in my stories live somewhere in the southeastern United States. My new novella What We Deserve is set in Georgia, with scenes split between the college town of Athens and the big city of Atlanta.There are two reasons I set my stories in the South:1) As a Southerner, I want to see more positive portrayals of people from the South and the South itself. If you ask most people the media they normally associated with the South, they usually mention shows such as Dallas or The Dukes of Hazzard. Sometimes they even talk about the Deliverance-type crazy-mountain-man movies. Rarely does anyone mention Atticus Finch from To Kill a Mockingbird. As for the cities themselves, they aren’t all like Mayberry. Cities such as Atlanta, Birmingham, and Nashville are diverse centers of business, education, and research.2) Southern settings are underrepresented in media. If you’re watching a TV show or movie, more than likely it’s set in New York, Chicago, or Los Angeles. The people, the pace of life, even the weather is different in the South. For example, in the winter, your New York characters can walk around the slushy streets and enjoy the snowfall at Central Park. Earlier this year in Alabama, we got 8 inches of snow, and everything (and I mean EVERYTHING) completely shut down for almost a week.When I was a teenager, I dreamed of moving away. I wanted to live anywhere other than the South. But, as I got older, I began to appreciate the good things about the place where I grew up. There are still problems here, still a ways to go, but we can’t change things if we aren’t here.(suggested graphic: Atlanta skylinehttp://en.wikipedia.org/wiki/File:Atlanta_Skyline_from_Buckhead.jpg)For What We Deserve, I picked Atlanta because it is my favorite place to visit. It’s also a city that offers almost everything: wonderful dining, cultural events, major sports. It has an active and lively GLBT community, and the citizens are diverse. Two important scenes in the book take place at Centennial Olympic Park, which was built for the 1996 Summer Olympics and is now a downtown fixture.Athens is actually smaller than the city in which I grew up. The University of Georgia, which makes its home in Athens, is the largest of Georgia’s institutes of higher learning, and its students make up about a third of Athens’ population. It is the epitome of the Southern university, with historic buildings and beautiful landscaping.For me, Atlanta and Athens represent some of the best of what the South is. Centers of education and research. Cities full of life and culture. These parts of the South aren’t shown near enough. 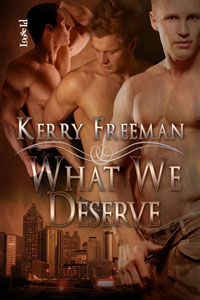 Blurb:
Years
after Sean’s heart was broken by his first love Jamie, he is ready to
try his hand at love again with Tyler, his handsome,
perfect-geek-for-him boyfriend. But when Jamie returns home after twelve
years in the Army, Sean finds himself unable to choose between his
passion for Tyler and his still smoldering desire for Jamie.
But if Jamie and Tyler get along, maybe he won’t have to choose after all. 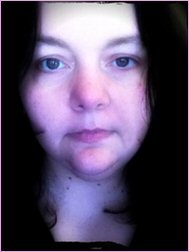 When
I started writing, I wondered which genre made me the most excited to
put words to paper. Okay, words to Google Docs, but that doesn’t sound
as pretty.
I quickly discovered that I enjoyed writing contemporary romance set in the South. Born and raised and still living
in the South, I love writing about the small towns and big cities and
the people who call them home.
Then I wrote my first gay romance, and the final piece clicked. Two
men finding their way through the world to each other, despite
everything that tries to keep them apart…that’s the story I want to
write.
I live in Alabama with my husband and two socially-awkward
dogs. A tomboy and a geek from way back, I have a day job but dream
that I will one day write full time. I have a weakness for yaoi,
Japanese stationery, YA, and Adele. I own an impressive t-shirt
collection. Nowaki & Hiroki are my homeboys.
Favorite books:
To Kill a Mockingbird, Dune series (the ones written by Frank Herbert),
The Year of Magical Thinking, Pride and Prejudice, Beautiful Creatures
& Beautiful Darkness, A Wrinkle in Time, Drawn Together (Z. A.
Maxfield), Breathe (Sloan Parker)
Favorite authors: Harper Lee,
Madeleine L’Engle, Frank Herbert, Z. A. Maxfield, Sloan Parker, Kami
Garcia & Margaret Stohl
Website – http://kerryfreeman.com/
Blog – http://kerry-freeman.blogspot.com/
Facebook – http://www.facebook.com/pages/Kerry-Freeman/159157444111026
Twitter –
http://twitter.com/#!/kfwritesbooks
Giveaway Details

Stop by Coffee Beans and Love Scenes blog – the tour organizer for additional blogs hosting this author.  While you’re there check out the giveaway that CBLS is doing as well for What We Deserve.