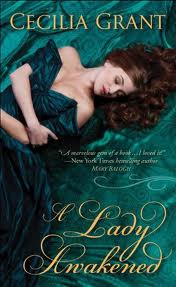 Good morning ATPT peeps.  I have a special guest this morning for you all.  I would like to introduce you to debut author Cecilia Grant.  Cecilia’s debut novel A Lady Awakened has been getting some fantastic buzz in the romanceland.  I definitely recommend this book for any historical romance lovers.  It’s must for 2012.

Now enjoy this little Q&A session that Cecilia had with herself! 🙂
Questions Nobody Asked Me: I Run My Own Interview

I’ve been blog-touring since December 1 to promote my debut historical romance, A Lady Awakened, which was released December 27. I’ve talked about themes of the book, my journey to becoming a published author, junk food I can’t resist, and mortifying music on my iPod – plus I’ve struggled to find fresh answers to the prompt “Tell us about your book.” It has been an adventure.

As the Pages Turn is one of my last blog-tour stops, and I thought I’d take the opportunity to answer a potpourri of questions that no interviewer asked me, but that I might ask if I were interviewing an author. Acknowledging the potential for self-indulgence, here we go.

Typical Martha POV, Chapter 12:
Little Carrie had much to say of the kitten, who was apparently equipped with a full repertoire of such antics as were common to kittens and delightful to those who cared for that kind of thing.

Typical Theo POV, Chapter 2:
She […] looked at him, and looked away, just as she would if she’d been foolish enough to gaze straight at the sun, or at one of those gods a mortal could not bear to behold. Apollo, or someone. Mercury. Whichever was the broadest-shouldered, and most generously equipped.

What about sample lines for the hero and heroine of your next book? Here are typical Will and Lydia of A Gentleman Undone. Dialogue this time:

Typical Will, Chapter 12:
“I’ve already admitted I desire you. I just…” Confound it, would she even understand? “I want to be better than this. I don’t want to be the kind of man who ruts with someone else’s woman in the hallway of a gaming hell.”

Typical Lydia, Chapter 16:
“Compromise is but an over-nice way of saying neither person gets what they want. Do that again. This time use your tongue.”

Do Martha and Theo appear in A Gentleman Undone?

Yes, Martha and Theo both appear in several scenes of my next book (hero Will is Martha’s brother). A Gentleman Undone is set in the spring of 1816, so you’ll get a peek at how they’re doing a year and a half after the events of A Lady Awakened.

Which of the characters in A Lady Awakened would you say is most like you?

I‘m afraid it might be Theo’s father, Sir Frederick – he’s sort of a manifestation of my secret fears about my own parenting style. I suspect I’m entirely capable of correcting a kid’s grammar while s/he’s trying to tell me something important and heartfelt.
What’s a food you just won’t eat?

Any kind of arthropod. Lobsters, crabs, shrimp, crawfish – they just look like great big bugs on a plate. Even if you un-shell them and mush up the meat and hide it in ravioli or something, I still have that mental image of the legs and antennae and carapace. Ick.

Question for commenters: What questions would you like to see asked in author interviews? And what’s a food you won’t eat? Leave a comment and you’ll be entered to win a copy of A Lady Awakened.

Blurb: Newly widowed and desperate to protect her estate—and housemaids—from a predatory brother-in-law, Martha Russell conceives a daring plan. Or rather, a daring plan to conceive. After all, if she has an heir on the way, her future will be secured. Forsaking all she knows of propriety, Martha approaches her neighbor, a London exile with a wicked reputation, and offers a strictly business proposition: a month of illicit interludes… for a fee. Theophilus Mirkwood ought to be insulted. Should be appalled. But how can he resist this siren in widow’s weeds, whose offer is simply too outrageously tempting to decline? Determined she’ll get her money’s worth, Theo endeavors to awaken this shamefully neglected beauty to the pleasures of the flesh—only to find her dead set against taking any enjoyment in the scandalous bargain. Surely she can’t resist him forever. But could a lady’s sweet surrender open their hearts to the most unexpected arrival of all… love?

Cecilia Grant always knew she’d do something with that English degree. After waiting tables, composing software Help files, and answering the carpool-lane-violators hotline, she’s delighted to be writing stories. Cecilia makes her home in the Pacific Northwest with her fellow-writer husband, two bookish children, and un-literary cat and dog.