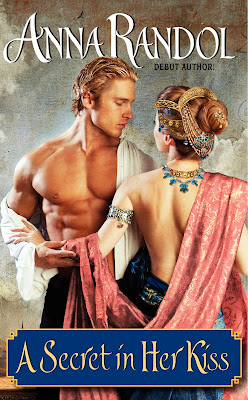 Ing: Welcome Anna, to ATPT this morning! Anna is a debut author and her debut novel A Secret in Her Kiss is must read.  I absolutely fell in love with this book.  Anna, can you tell the readers in your own words a bit about the book and what they can expect plot, sexiness, length wise.

Anna:  Born to a Greek mother and British father and raised in the heart of the Ottoman Empire, Mari Sinclair doesn’t owe allegiance to anyone. A shot exploding above her head convinces Mari to cease spying for the British and return to her work as a naturalist. The British government, however, refuses to let her go and instead blackmails her into continuing. To make matters worse, they saddle her with Major Bennett Prestwood, an overbearing, battle-weary soldier, ordered to ensure she fulfills her part of the bargain. As her assignment progresses, it becomes clear that her identity has been compromised. Yet even once that fact is certain, she’s given one last task—to draw the specifications of a new Ottoman fort in the heart of an area so perilous two agents have already perished in the attempt. Despite Bennett’s claims to be her protector, he demands her cooperation. When passion flares between them, Mari must decide if she can trust her heart to man who obeys orders at all costs…even if the ultimate cost is her life.

After fighting Napoleon for twelve years, Major Bennett Prestwood knows that without duty, life would be chaos. Yet when he’s ordered to travel to Constantinople to protect a spy, he hesitates. Too many family obligations await him in England to waste time protecting a foolish woman who cares nothing for her own safety. But a good soldier always obeys orders, and he accepts the mission. Despite his expectations, Mari Sinclair tempts him to look beyond his assignment and pursue her for himself. When the full extent of the danger toward her is revealed, he must call upon all his expertise to discover the person behind the plot against her life before it’s too late. As always, duty must take precedence over his wishes. But what if that duty forces him to sacrifice the life of the woman he loves?

A Secret in Her Kiss is a steamy, sultry read, but not over-the-top hot. It’s 384 pages.

Ing: I really enjoyed getting to know Bennett Prestwood the hero of your novel.  His character is downright yummy.  Can you tell the readers a bit more about Bennett? What in your opinion do you think will draw the readers in and make them love Bennett?  What are his weaknesses and strengths?

Anna: Bennett is such a big sweetheart. He’s a tough warrior, but there’s a sensitive side to him I think readers will love. He’s always willing to put the heroine’s needs before his own, which I think is very sexy in a hero!

Bennett’s a younger son, so he knew from childhood that he’d be destined to join the military. Even though he secretly yearned to be a poet, he did his duty without complaining. Duty and honor are how he defines himself. They make him a strong and noble man, but he’s clung so tightly to duty that it has become a shield, a way for him to justify the horrors he was ordered to do as a soldier. That makes it doubly hard for him to give up and for him to understand how my heroine, Mari, might not see things the same way. But I think readers will also come to understand that he’s a man who cares deeply. He won’t let anything hurt the ones he’s sworn to protect.

Ing: I adored Mari Sinclair, your heroine. She is not your traditional historical heroine and I really liked that.  Can you tell the readers a bit more about Mari? What in your opinion do you think will draw the readers in and make them love her?  What are her weaknesses and strengths?

Anna: Mari is an incredibly strong heroine, a situation forced on her when her father became addicted to opium when she was young. She’s had to rely on herself for so long that it’s a bit difficult for her to rely on anyone else. But I think readers will see right away her complete loyalty to her friends, family, and the cause she believes in. Also, she’s never one to wait on the sidelines, if there is a problem she will be the first one trying to solve it.

Ing: What was a scene that stood out or was memorable for you when writing A Secret in Her Kiss? Why did this scene stand out for you?

Anna: I love the scene later in the book where Bennett finds out Mari has read his book of poetry. Even though he regards his writing as an embarrassment, he can’t resist trying to find out what she thought. I love this little bit of vulnerability from such a strong, decisive hero!

Ing: I loved the setting of this book.  Not too many historical romances are set in the exotic Ottoman Empire, Constantinople.  I would love to hear the back story of how this book came to be set here.  Did you pick the place first and then the story came along or was it the other way around?

Anna: I think it was some combination of both. While I was researching information for an earlier manuscript, I came across the letters of Lady Mary Wortley Montagu, wife to the British ambassador to Constantinople. Her descriptions of the city were lush, witty, and exotic. I fell in love with the Ottoman Empire through her eyes. As I read the plot of A Secret in Her Kiss emerged in my thoughts. While it may not be a typical setting for a Regency, as I developed my plot, it became clear Constantinople provided the ideal combination of colorful intrigue and dangerous deceptions—a perfect backdrop for Mari and Bennett.

Ing: What else can we look forward to from you for the rest of 2012? Will we get a story for any of the other secondary characters in this book?  Could you give some details on these upcoming projects?

Anna: In June 2012, readers will be able to see what happens to Bennett’s younger sister in her own e-novella. Sophia Prestwood is just rediscovering her own strength, but it’s a knowledge she must quickly claim as she faces off with a maddeningly handsome magistrate who thinks she’s guilty of murder.

Then, in August 2012, my next novel, Sins of a Virgin, will be released. To secure her future, former spy Madeline Valdan announces she’ll auction the one thing no one suspects she still possesses—her virginity. But Madeline’s no fool. She won’t entrust her precious commodity to just anyone. She hires Gabriel Huntford, a Bow Street Runner, to protect her virginity until it’s properly paid for. Although the passion Huntford inspires is unlike anything she’s ever known, Madeline knows better than to give herself away for free. She also knows the man she hired is hiding a dangerous agenda of his own.

Ing: Now on to questions about you. We want to know more about Anna Randol. Who are some of your auto buy authors that you read now?

Anna: I love Joanna Bourne. She has an amazing ability to have her French characters speaking English and yet still sounding French.  I also love Sarah MacLean, Eloisa James, and Julia Quinn.

Ing: What was the first romance book you ever read? Do you still have the book on your shelf?

Anna: I wish I could remember! My older sister started reading romances before I did, so I would sneak books from her collection. The first romances I remember getting from the library were Georgette Heyer novels because they were hard back and I could look for them without being seen at the paperback romance shelves.

Ing: What was the best advice that you ever got from anyone in the writing industry that has stuck with you?

Anna: Just keep writing, you can always fix it later. I think is helps me immensely to remember not to get stuck on a scene that isn’t working out. Usually by the time I come back to it, I know how to tweak it until it’s the scene I envisioned.

Ing: If you could be one of your heroines for a day, which one would you be and why?

Anna: I would love to be Madeline Valdan in my August release, Sins of a Virgin. In real life, I’ve never been the type of girl who has men falling over at her feet. I think for one day that would be a blast.

Ing: If you had a dinner party and could only invite 5 characters from any romance book out there including yours who would they be?

What? No one said I had to share my dinner guests…

Ing: Anna thanks so much for stopping by today! Let me just say that I loved your debut novel and look forward to more of your upcoming work.  And OMG I love the cover of A Secret in her Kiss.  That cover model is so yummy!  Anywhoo—thanks again and I wish you much success.  Do you have any last words or questions you would like to pose to the readers of this blog?

Anna: I love my cover model, too! So if you were writing a romance, who would you pick to be on the cover yours? (One lucky commenter will receive a signed copy of A Secret in her Kiss!) 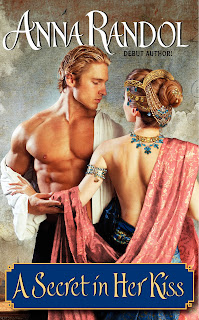 Blurb:
She would gladly relinquish her life of intrigue…A rare beauty, raised in the exotic heart of the Ottoman Empire, Mari Sinclair knows it’s time to end her career as a British spy when she narrowly avoids a brush with death. Unfortunately her employers think otherwise—and they are not above using blackmail to keep Mari in the Game.Saddled with a handsome, duty-obsessed “minder” to ensure that she completes—and survives—one last mission, Mari is incensed…for her guardian, Major Bennett Prestwood, is simply too dedicated, too unbending, and too disarmingly attractive. But in the face of dark secrets and deadly treacheries, as the true peril to Mari is slowly revealed, loyal soldier Bennett realizes that, to save and win this extraordinary woman, he will have to do the unthinkable and break the rules—rules that passion and desire have suddenly, irrevocably changed.
Purchase Links: Amazon / B&N / Indie Bound / Books-A-Million
About Author: 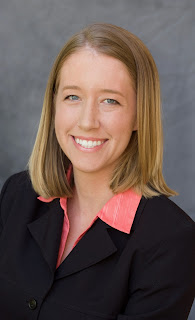 Anna Randol was raised in Southern California. When she was eight, she decided her diary was too dull and decided to write as if she lived on a raft in the Amazon with her imaginary dog, Cream Puff. At twelve, Anna decided racing down rapids with only a dog for company might get rather lonely. Handsome British heroes began to appear on her raft, and her love of adventure-driven romance was born.
Don’t believe it? See for yourself!

Anna currently lives with her family in Southern California, where she loves eating chocolate, making plans for remodels she never intends to do, and drawing pictures in the sand at the beach to baffle future archaeologists.