Good morning ATPT peeps.  Please help me welcome author Sarah Ballance to the blog this morning.  Sarah is stopping by on her blog tour to tell us a bit about her book Familiar Light.

Ing: Hi Sarah!  Welcome to the blog! Could you tell the readers about Familiar Light?  What can they expect plot, pace, sex, etc from this book? Sarah: Hi, and thanks so much for having me! FAMILIAR LIGHT is a fast-paced novella, the latter by necessity because it was written for the Noble Romance authors blog tour and word count was a tight requirement. It made for an interesting challenge, though, especially when it came to adding a suspense element (which was not a requirement, but something I love dearly). In the story, Laney comes back to town after a long absence, hoping to rekindle things between herself and Bridger. He initially refuses her, but then she becomes the victim of a nasty attack and he realizes there’s no hiding the love he still has for her, no matter how much he wants to pretend he’s moved on. From there, things happen quickly. One man’s obsession turns deadly, and no one is prepared for what happens next. While there is some sexual content, it’s not explicit. Rather, I consider this a sensual romance, or what readers would find in a mainstream novel.

Ing: Can you tell us a about the hero Bridger Jansen? What about Bridger do you think will draw the readers in and make them love him?Sarah: Bridger followed in his father’s footsteps, serving as the lighthouse keeper, but at one point in the story he laments his position as a glorified maintenance man, crediting that for the reason Laney never came back to him. He lives a simple life, but he lives it big. He’s open, no holds barred, and when he loves he loves with his whole heart. He’s also got a great sense of humor and bit of a wry internal voice. He can laugh at himself, but he knows when it’s time to get serious. He’s a hard guy to resist.

Ing: Now tell us a bit about the heroine Laney Kent? What about Laney do you think will draw the readers in and make them love her?Sarah: She made a mistake not going back to Bridger years ago, and she not only realizes it, but she faces it head on. He takes her breath away, then breaks her heart by asking her to leave. She believes his initial reaction to be anger, but through a crack in his armor she sees the pain she’s caused. And she respects it, because when he asks her to go, she does. She strikes me as an incredibly brave woman, but she’s also vulnerable here are no walls between her and Bridger, which leads to some great moments, funny and passionate. They’re just real, and that’s what I love most about them.Ing: Why are these two perfect for each other? What about them individually makes them so drawn to each other? Why do you think the readers will fall in love with this couple? Sarah: They share an easy, playful banter that just feels good. You can tell they really enjoy being around one another, and in the face of the love you really feel the pain and despair when a killer comes between them. They’re just so genuine, it’s hard not to pull for them.
Ing: What was a scene that stood out or was memorable for you when writing Familiar Light? Why did this scene stand out for you? Sarah: The first scene was so hard for me! I had a hard time putting myself in Bridger’s head. When Laney shows up out of the ever-loving blue and wants to talk to him, how does he feel? What’s really behind that  mask he wears? I struggled with his emotions until I skipped to the second scene, which is from his POV. I only had to write the first couple of paragraphs to figure it all out. I was able to go back to finish that first scene, and the rest of the story flew from there.
Ing: I like knowing and hearing the back story about how a book or series came about. Can you tell us where the idea for Familiar Light came from?  Is this book going to be part of a series or is it strictly a stand alone?Sarah: It was written for the Noble Romance Authors Blog Tour, and for that so I had to stick to a certain length and the story had to fit a theme, which was “Timeless Desire.” I used that element when I brought back old lovers, but I also added the darker “desire” theme with my bad guy, who has a deadly obsession with one of my characters. The story moves fast, and it ends with a revelation I hope will have readers turning in for the novel-length follow-up, TIDE OF LIES. Readers meet its hero, Holden Whitlow, as he works to solve the case in FAMILIAR LIGHT. In TIDE, he picks up a new crime scene. The identity of this latest victim absolutely stuns him, but that’s only the first of a trio of devastating twists that change everything for Holden. Although TIDE OF LIES follows FAMILIAR LIGHT, TIDE actually stands alone and ends the two-book series.
Ing: Can you tell or give us a peek at what you have up your sleeve next? What else can we look forward to from you? Could you give the 411 on these upcoming projects? Sarah: In addition to TIDE OF LIES,I have another romantic suspense entitled LAST CALL on the way. Here’s the blurb for that one, coming this spring to For the Muse Publishing:
An accidental witness to a murder-for-hire, ex-cop Rhys Clark becomes the target of ruthless killer, one determined to silence her at any cost. Playing dead seems to be the most likely way to stay alive, but when her protection comes in the form of mega-sexy former adversary Nick Massey, Rhys can think of  a few fates worse than death.Nick Massey may have walked away from his troubles, but he never got past wanting Rhys. Once paired undercover, they’d been nothing but fireworks until a botched assignment ended her career, sending his into a tailspin. Now a mysterious client is willing to pay Nick anything to keep Rhys safe, but it isn’t until fate takes a critical turn that he realizes the devastating truth: he’s been her greatest threat all along.
Ing: Sarah thanks so much for stopping by today! I really appreciate you answering all these questions. Do you have any last words or questions you would like to pose to the readers of this blog? Sarah: Thank you so very much for having me! I’d like to let readers know I offer a weekly giveaway on my blog and all email subscribers are automatically eligible. The winner gets their choice of a $10 gift certificate to Noble Romance or $5 to Amazon, with the drawing courtesy of random.org. There’s a new winner every weekend, so join us over there and, um, brace yourself. We get a little crazy sometimes! Head over to sarah@sarahballance.com to sign up. :c) 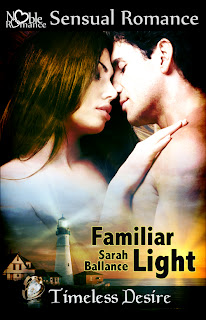 Blurb:
Seven years of longing comes down to just one night.

Laney Kent returns to Barrier Shoals hoping to reunite with her first love, Bridger. She anticipates his reception might be chilly, but what she doesn’t expect is to become the victim of a deadly obsession . . . or that this night with Bridger could be her last.

Bridger Jansen tangled a lot of sheets trying to forget about Laney, but his heart knew what the rest of him refused to admit: he could love no one else. He’s determined not to forgive her for leaving him without explanation, but when he fails to protect her from a viscous attack, the person he can’t forgive just might be himself.

Sarah lives a charmed life as the mother of six incredible homeschooled children, all of whom are completely adorable when they’re asleep. Her husband of many years (long, long years, he calls them) is the kind of guy who could teach those heroes from the books a thing or two about romance, not that he’d readily admit it. Completely supportive of her love for writing fiction, he’s generously offered to help with any necessary research for “the good parts.” She’s never had to ask twice.

Although the idea of writing romance and romantic suspense initially intimidated Sarah, it has morphed into a favorite pastime since her characters, unlike her kids, actually listen to her. Er, sometimes.

There is a giveaway being done as part of this tour. Sarah is offering FOUR e-copies of this book. Winners will be picked at the end of the tour and announced at Sizzling PR Facebook Page. Click the link below and fill out the form to be entered. Good luck!
Sarah Ballance Giveaway of Familiar Light