So ummmm…yea ATPT peeps I have “THE” Suzanne Brockmann visiting the blog today.  If you haven’t read her books before then you are missing out. Suz is the beloved author of one of my favorite series, Troubleshooters.  I’m so happy to welcome here this morning and to be a part of her countdown to her new Fighting Destiny series.

Suz is here this morning to give us the 411 on her upcoming book Born to Darkness the first book of the Fighting Destiny series.  I hope you all enjoy learning about this upcoming book and new series from Suz. Take it away Suz… 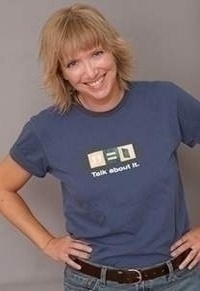 I’m doing something fun and new to promote the release of BORN TO DARKNESS, my next book, which hits the stores on March 20th. (link to book: Born to Darkness Page)

See, BtoD isn’t just my next hardcover romance novel, it’s also the very first book in a brand new series called “Fighting Destiny.” And even though this new series contains many of the same elements of my reader-favorite Troubleshooters series (the hero is a former Navy SEAL!), BORN TO DARKNESS is a parnormal, with urban fantasy and SF elements, which makes it a little bit different than my other fifty-something books.

So I wanted to go big with my promotional efforts!

I always do a countdown where I post a new page on my website, every Monday through Friday, in the month leading up to my latest hardcover’s release. Blogs, interviews, Facebook chats, links to cool websites (like this one!), recommended reads, contests, quizzes, excerpts from the book. . . These are all things I’ve done in the past. (link to countdown main page: Countdown to Born to Darkness Page)

But for BORN TO DARKNESS, it occurred to me that the question, “How would you cast your book?” is so frequently asked by readers for a very good reason – because try as we might to describe the characters in our books, a picture is worth a thousand words. Isn’t that how that old saying goes?

With that in mind, I set out on something that I’ve called my “Born to Darkness Project,” where I actually, literally “cast” the book. With this cast of actors, I held a photo shoot, where I got hundreds of terrific photos and even some video footage, too. I’ve been making a series of amateur book-trailer-videos, as well as releasing the photos on my website during my BtoD countdown. I’ve also made this really fun 9-piece set of BORN TO DARKNESS trading cards. Check it out at my website at Born to Darkness Trading Cards

Anyway, I have some experience in producing plays and movies, so I used those skills to set up auditions and find actors who looked like the characters who appear in the movie-version of BtoD that plays endlessly in my head! (Or TV series. I think it’s probably more accurate to describe what goes on inside of my head as a “Fighting Destiny” TV series.

Last fall, I held auditions to cast two of the main characters in the book: the former Navy SEAL hero Shane Laughlin, and the kickass but petite heroine Michelle “Mac” Mackenzie. The other four major supporting roles of Dr. Elliot Zerkowski, Stephen Diaz, Dr. Joseph Bach, and Anna Taylor are all played by actors I’ve worked with in the past, including my very talented son, Jason.

I held the auditions in New York City, just a few days in advance of my scheduled photo shoot with Shirin Tinati, (www.shirintinati.com) who is one of New York’s most talented and creative professional photographers.

Several weeks in advance of my NYC trip, I reserved a rehearsal space over at Theatre Row Studios, and sent out a casting notice to a website called “Actor’s Access.”

Here’s the “character breakdown” that was sent out to the tens of thousands of actors who use Actor’s Access to find auditions:

******************
After this notice went out, I then received, via the Actor’s Access website, hundreds of headshots and resumes from a wide variety of actors.

And it was kinda amazing how often my character descriptions were ignored. I got headshots from actors who were much too old or much too bald or much too tall, in the case of the women. Mac had to be shorter than the actor I’d already cast to play Anna. She just had to be. (I was less fussy about the length of her hair. True, in the book, Mac has short hair, but long hair is “in,” particularly in NYC. I decided early on that I was not going to ask any actor to cut her hair. I didn’t think that would be very nice of me.

So I waded through the hundreds of submissions, not just looking at the headshots and other photos, but also checking resumes for height.

One actor, Briana Pozner, stood out to me, right from the start. For me, it was all about her eyes. She was fierce, and to me, she had the perfect intensity for Mac. But she didn’t list her height anywhere on her resume! Which meant that she was probably 6’2”, right?

My husband Ed was acting as my producer for this project, so he was in charge of emailing or calling the actors who had the “right look,” and scheduling an audition for them, and making sure they were available on our already scheduled shoot date.

So he emailed Briana to ask, “Hey, how tall are you?”

Well, when Briana got that question, she was sure it was because we were looking for someone tall, and it was with great resignation that she let us know that she was, in fact, quite petite! We quickly scheduled her, she came in, knocked the audition out of the park, and we hired her, close to on the spot, to be our Mac.

The young man who plays Shane is an actor named Aubrey Grant who also came to our New York audition. He was wearing cargo pants, a T-shirt, and clunky boots when he showed up – and he walked into the room in full-on former Navy SEAL mode. That was impressive!

So Aubrey and Briana joined a cast that already included Eric Aragon, Apolonia Davalos, Jason T. Gaffney and David Singletary, and together those six actors brought the characters in BORN TO DARKNESS to life.

You can see some of the pictures already on my website at Suz’s Website (surf around, you’ll find them!) and you’ll see more if you drop as my countdown continues. And don’t forget to send in an SASE to get some of those trading cards – they’re shiny and gorgeous, and they make great book marks!

Thank you, Ing, for letting me blog here today! I’ll be dropping by throughout the day in case anyone has any questions!

P.S. I’ve got a few book signing in the New York City area in March and April, and I’ve persuaded Aubrey (Shane), Briana (Mac), and Diaz (David) to come to these events to schmooze with readers. And Jason (Elliot) will be with me at my California event! Check out my complete schedule of book signings at Suz’s appearances page! 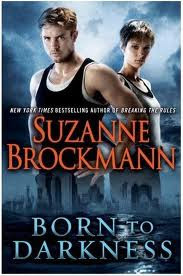 Blurb:
Dishonorably discharged, former Navy SEAL Shane Laughlin is down to his last ten bucks when he finally finds work as a test subject at the Obermeyer Institute, a little-known and believed-to-be-fringe scientific research facility. When he enters the OI compound, he is plunged into a strange world where seemingly mild-mannered scientists—including women half his size—can kick his highly skilled ass. Shane soon discovers that there are certain individuals who possess the unique ability to access untapped regions of the brain with extraordinary results—including telekinesis, super strength, and reversal of the aging process. Known as “Greater-Thans,” this rare breed is recruited by OI, where they are rigorously trained using ancient techniques to cultivate their powers and wield them responsibly. But in the depths of America’s second Great Depression, where the divide between the haves and the have-nots has grown even wider, those who are rich—and reckless—enough have a quick, seductive alternative: Destiny, a highly addictive designer drug that can make anyone a Greater-Than, with the power of eternal youth. The sinister cartel known as The Organization has begun mass-producing Destiny, and the demand is epidemic. But few realize the drug’s true danger, and fewer still know the dirty secret of Destiny’s crucial ingredient.  Michelle “Mac” Mackenzie knows the ugly truth. And as one of the Obermeyer Institute’s crack team of operatives, she’s determined to end the scourge of Destiny. But her kick-ass attitude gets knocked for a loop when she finds that one of the new test subjects is none other than Shane, the same smoldering stranger who just rocked her world in a one-night stand. Although Shane isn’t a Greater-Than like Mac, as an ex-SEAL, he’s got talents of his own. But Mac’s got powerful reasons to keep her distance from him—and reasons that are just as strong to want him close. She’s used to risking her life, but now, in the midst of the ultimate war on drugs, she must face sacrificing her heart.
Click HERE to read an excerpt of Born to Darkness
Pre-order links: Amazon / Barnes and Noble