Why We Love the Regency Era
When you look at a complete list of historical romance novels, there is a hugely disproportionate amount of attention given to the Regency era. This brief blip in history (which ranges anywhere from ten to thirty years, depending on how you count) is one that readers and writers have been obsessing over for quite some time…and there doesn’t seem to be an end in sight.
Never mind that the practice of bloodletting was still common during this time, or that a large chunk of England’s riches came from slavery in faraway British colonies. We want dukes and spies and ladies. We want tight breeches and cravats and low-cut gowns.
I’m just as guilty of this phenomenon as anyone else, and I’m not ashamed of it. There’s something about this decade or two in human history that appeals to the romantic inside me.
If we take Jane Austen’s word for it (and so many of us do), men and women had clearly defined roles as far as relationships went during the Regency era. A woman was chaste and witty and could only better her situation through a good match. A man was expected to do all his wooing during the carefully guarded moments of a ball, family gathering, or party. And that’s the whole game. With these strict parameters in place (and a guardian or two thrown in for good measure), men and women were somehow expected to navigate the wonderful and messy and sexually-charged path to love.
I like to think of it as one big chess match. I mean, people have been playing chess for centuries, yet it’s the same sixty-four squares on the board and the same pawns and kings and rooks handed out ahead of time. There are only so many moves you can make.
But as a game, it persists—not because it’s innovative or new, but because there is a challenge in going up against other players, in finding ways to best your opponent in accordance with the same rules that pertain to everyone. No matter how many times you set up the board, the outcome is going to be different.
Regency romances are like that. You’ve got the same setting and the same general players and the same rules of society, but each story is unique.
My own take on the Regency romance in Love is a Battlefield isn’t very traditional, but I’ve kept a few of the key ingredients: namely the ideology that a man should act like a gentleman and a woman should, whenever she can possibly help it, put on a high-waisted gown of muslin and silk.

Because let’s face it—no matter what else appeals to you about the Regency period, those dresses look great on just about everyone. 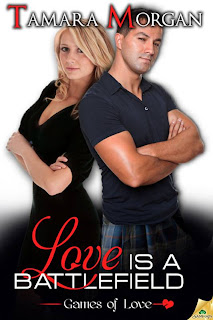 It takes a real man to wear a kilt. And a real woman to charm him out of it.

It might be modern times, but Kate Simmons isn’t willing to live a life without at least the illusion of the perfect English romance. A proud member of the Jane Austen Regency Re- Enactment Society, Kate fulfills her passion for courtliness and high-waisted gowns in the company of a few women who share her love of all things heaving.

Then she encounters Julian Wallace, a professional Highland Games athlete who could have stepped right off the covers of her favorite novels. He’s everything brooding, masculine, and, well, heaving. The perfect example of a man who knows just how to wear his high sense of honor—and his kilt.

Confronted with a beautiful woman with a tongue as sharp as his sgian dubh, Julian and his band of merry men aren’t about to simply step aside and let Kate and her gaggle of tea-sippers use his land for their annual convention. Never mind that “his land” is a state park—Julian was here first, and he never backs down from a challenge.

Unless that challenge is a woman unafraid to fight for what she wants…and whose wants are suddenly the only thing he can think about. 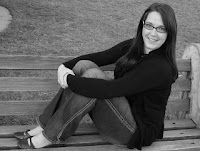 Tamara Morgan is a romance writer and unabashed lover of historical reenactments—the more elaborate and geeky the costume requirements, the better. In her quest for modern-day history and intrigue, she has taken fencing classes, forced her child into Highland dancing, and, of course, journeyed annually to the local Renaissance Fair. These feats are matched by a universal love of men in tights, of both the superhero and codpiece variety.