Another fun giveaway for you all this evening!  One of my favorite authors Stephanie Tyler released a new series about some hottie wolves called the The Eternal Wolf Clan series.  The first book Dire Warning released 3/6.  To celebrate this new series and the release of the first book in the series Steph is letting me giveaway copies of Dire Needs and the prequel Dire Warning.  If you are interested see below on how to win! 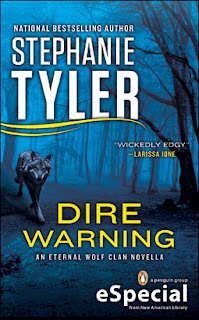 Prequel eSpecial novella – Eternal Wolf Clan series
Pub Date: 2/7/2012
Buy Links:
Amazon / B&N / iBooks
Blurb:
Immortal and invincible, Rifter is the head of the last surviving pack of Dire Wolves—a band of Alpha brothers charged with protecting the Weres. But now that witches have joined forces with nefarious weretrappers, it’s a perfect storm for double trouble. When the murder of a human points to a wolf, along with the threat of the packs being outted to the world, the Dires fear that something even more dangerous is out there hiding in the dark, something waiting for the right time to show itself. 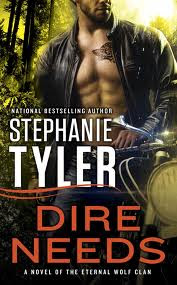 Book 1 of – Eternal Wolf Clan series
Pub Date: 3/6/2012
Buy Links: Amazon / B&N / BAM / iBooks
Blurb:
The full moon is their mistress. They are predators of pleasure and pain. Feared by humans, envied by werewolves, the Dire Wolves are immortal shifters, obeying no laws but their own bestial natures. Once they were many, but now only six remain, a dangerous wolfpack forever on the hunt…

Rifter leads the pack, embracing the lifestyle and ethics of an outlaw biker even as he battles an ancient enemy who has become a new, powerful force. But with his Brother Wolf raging inside him, howling to be unleashed, he needs to satisfy his hungers. And when he meets a drop-dead gorgeous blonde drinking alone in a bar that caters to both human and inhuman, Rifter’s primal instinct is to claim her.

Gwen has her own desires, long unfulfilled. She hopes a passionate night with the leather-clad, Harley-riding biker will ease her suffering. The seizures that have wracked her body her entire life are incurable—and they’re killing her.

But none of that will matter if Rifter can’t stop the growing threat to them all — trappers who are determined to enslave humankind and use the Dire wolves as part of their nefarious plan.