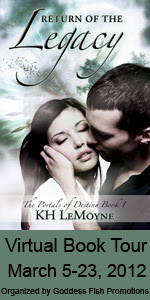 1. A woman’s scream, a bright light, a sharp knife, and whoa, a new world?


2. A tale of adventure, mystery, fantasy, and love.


3. Logan: a hero who crosses space and time to save those he loves.

4. Briallen: a heroine with power she never imagined, but only if she trusts enough to release control.

5. Scottish Isles with a magical twist

6. If you love time-travel, wait until you’ve experienced the disturbingly familiar world beyond the portals.
7. Dangerous mages, powerful elves, and dragon riders that make one sit up and take notice!
8. Three magical dimensions…Two mystical bloodlines…One undeniable destiny.
9. Because you have to love a man who allows nothing standing in his way:

Logan gripped the sword in his hand and advanced. Bri hung in the Plagiar’s hold. Her fingers wrapped around the arm at her neck, trying to breathe. She was too pale, the bruise forming on her face, too vivid. The golden glow around her stuttered.

“One more step and I’ll spill her blood right here.”

“I wouldn’t recommend it.” Logan marched closer. “She is the only reason you’re alive. You kill her, you hurt her, and I’ll cut off your balls and feed them to the fish before I kill you.”

10. This is like eating just one potato chip. Can you really resist reading the book for one more peek? 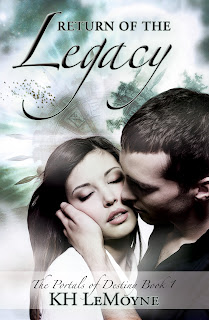 Born a magical empath, Logan MacKenzie has spent his life protecting his family from discovery. Evil has found them anyway. What begins as Logan’s search for answers on Earth becomes a race for survival in the magical dimension of Loci.

The battle to save those he cares about will reveal his true lineage—the bloodline of the Makir, one half of a pair of sentinels chosen to guard the mystical portals between dimensions. The price of his acceptance: a love he never imagined possible and a heartbreaking choice.

Her family attacked, her home destroyed, and now stranded on Loci, Briallen of Tir Thar, descendant of a magical race, has only to summon the power within her to return to her own dimension—or so she had hoped. Unfortunately, her powers aren’t cooperating, and the sorcerer bent on her family’s destruction will stop at nothing to possess her.

Raised without knowledge of the portals, the Makir guardians, or her own destiny, Bri takes a leap of faith in an alliance with Logan. Embracing an uncertain power and accepting his goals as hers offers her the only way home. If they fail, the consequences of allowing the portals to fall to evil are unthinkable—the destruction of every magical dimension throughout space.

Warning: This is a fantasy romance, containing magic, love, and courage. The omission of vampires and shapeshifters is intentional.

Logan’s brow rose at Bri’s purposefully lackluster explanation. She repressed a sigh. “The dimension of Loci.”

He took a deep breath and again gave no outward sign of fear or disbelief. “Explain that, please.”

“You entered here through a portal.” With his nod, she continued. “One of hundreds of dimensions throughout space.”

He was a quick learner. With a curt nod, she opened her hands at a loss for how to explain. “My history, perhaps legend, tells of only one dimension until the time all the powers of magic combined to leave. The portals created doorways, the exile created new worlds. Some dimensions bear resemblance to their home world. Many do not. The evolution among these worlds differs as well as the physical layout and…” She frowned trying to find the word.

Logan turned his back on her and ran a hand down the back of his neck. “And the towers on the island, the magical wall we had to penetrate to get here.”

“All under the rule and oversight of the Laird Mackinnon and his mages,” she said. Her response brought his gaze back to her.

She crossed her arms over her chest. “I was hoping you would have the answer to that.”

A former technology specialist, KH LeMoyne now writes romance fulltime with series in urban fantasy, high fantasy, and scifi/futuristic. She lives in Maryland with her wonderful husband and corgi. Much to her dismay, she rarely encounters supernatural beings other than on paper.
Website / Blog / Facebook / Twitter

The author will be giving away a $25 Amazon or Barnes & Noble GC to one randomly drawn commenter during the tour. Additionally, she’ll choose two randomly drawn winners of the Dragon Rider’s Gift eBook (A Portal Tale), due for release May 1, 2012.  Be sure to follow the tour and leave comments for a better chance at winning!  Click HERE for the other tour stops.

« Guest Post – Behind the Scenes with the Realtors – Playing House is Sexy?
Book Review + Giveaway – The Saint by Monica McCarty »