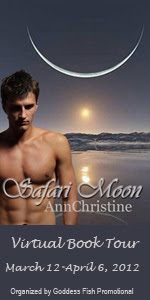 The wolf howl had Nyssa jerking out of bed wide-eyed and breathless, her heart pounding. I shouldn’t be here.  I should have said, no. You don’t know how to say no to Solo, and you know that’s true.

Rubbing her arms to warm the chills sliding through her, she sat back, leaning against the headboard. Make a list and stick to it. Nyssa closed her eyes and started ticking off all of the things she shouldn’t do if she would truly fall out of love with her best friend. But, could she still be his best friend? She didn’t think so. Did she really want to fall out of love with Solo? Yes, of course she did. After ten years wasn’t it hopeless? Did she have answers to any of her questions?

Well, she certainly knew what should be at the top of the list. She should never ever say yes to Steven Oliver Lawrence O’Neil St. John. If she wanted to fall out of love the word no, no, No, NO! should be all she says.

Enjoying his adventures should not be allowed. She should hate swimming with turtles and playing with whales. Going to Alaska and photographing wolves, she should think this dangerous. Oh my, she had been terrified of the whales but she’d also told herself be glad the killer whales were not sharks.

Another thing while we are talking about this. You should not love his grandmother. You know how much trouble you are getting yourself into by adoring this woman. And when he asks you to pretend to be engaged to him, just to keep his grandmother that is, of course, exactly what you want to do. Where Solo is concerned, I cannot do what I want. I know that.

At least you know his grandfather doesn’t care for you, has always thought Solo could do better than fall in love with you. Is that why Solo never fell in love with you? It had to be his grandfather who placed the “willing, eager, and able women,” ad in the paper. And that defined her to a T. She had always been willing, eager and able. She’d been his devoted follower from the day she set eyes on him. Gorgeous male animal that he is. Nyssa vowed to never ever be willing eager and able again. Nope she would be just the opposite, unwilling, slow, and definitely not capable. And would those traits discourage Solo from even asking her to tag along with him? Most likely, he only liked blond bombshell trophies for a date or two then he would somehow and very subtly convince said trophy date to breakup with him. How did he do that?

And Nyssa, you have to stop buying the magazines with his photos in them. You should never, never, never pick up your cell when he calls and do not return his text message. Avoidance is definitely the best policy.
*****

I’d like to thank As Pages Turn for hosting Safari Moon on their blog and also for the great question. This one was a lot of fun to write.

For all of you who stop by, please leave a comment. I would truly love to hear from you and enter you to win one of the giveaways. Hope everyone has a great day. 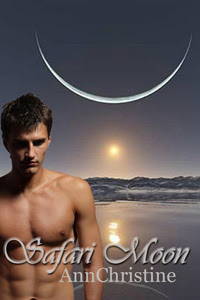 Blurb:
Buy Link: Rogue Phoenix Press
Solo St. John, a wildlife photographer, is preparing for a trip to Alaska. Suddenly, Solo finds women of all sorts invading his privacy, his home and his office, all cooing nonsense words and blatantly throwing themselves at him. Solo doesn’t know why, and he has no idea how to rid himself of the persistent women. He finally decides to beg a favor of his best buddy Nyssa Harrington.

In love with Solo for the past ten years and knowing he doesn’t return her feelings Nyssa doesn’t want to talk to Solo. She knows if she accepts his phone call, she will not be able to resist the temptation to hope again.

Excerpt:
It didn’t take much to envision him, half-naked, sleepy, in bed, and wrapped in the redhead’s arms.“Nyssa?” His sexy voice brought her out of the spell she’d almost smothered herself in.“Get your hands off my husband!” Nyssa’s voice blurted out but her few crisp words had the desired effect. The lady’s hands dropped to her sides and her lips moved in a pert little moue. At least Solo had the presence of mind to take advantage of her verbal warning. Standing, he neatly dumped the woman on her rounded derriere onto the couch.If Nyssa hadn’t felt such outrage, the scene could have been construed as comical. But she did feel intense indignation and a possessiveness she wouldn’t analyze at the moment.“Your husband?” The female cooed unbelievingly. “Now why do I find that hard to believe?”“What a surprise darling.” She turned to Solo. “Is this one willing, eager, or able? Or perhaps a combination of all three?” She did try to push the anger from her voice. But then she thought it was a nice touch and if anger got rid of the female it was worth the embarrassment.“Of all the nerve!”“Yes, my wife does have–nerve. Among other things.” Solo still stood, open-mouthed, as Nyssa made her way across the room. Nyssa ran her hand up Solo’s arm and endeavored for sultry instead of anger in her tone. “Sorry the plane took so long. Just like you asked, I bought a silky little black thing for bed.”There were a number of things that could go wrong. For starters, Solo could deny the relationship, and then of course the redhead could figure out she lied. Somehow she didn’t expect either scenario.“Pumpkin,” Solo said with a husky little growl in the timbre of his voice. Pumpkin?“Would you like a glass of wine?”Before she had a chance to answer, he had maneuvered around discarded clothes and tumbled furniture to make his way to the kitchen and back with a glass, and was now pouring. He grinned from ear-to-ear and she felt a real sense of accomplishment. “I tried to tell her I was spoken for, but until you showed up she didn’t believe me.”
About Author:

Born in Medford, Oregon, novelist Christine Young has lived in Oregon all of her life. After graduating from Oregon State University with a BS in science, she spent another year at Southern Oregon State University working on her teaching certificate, and a few years later received her Master’s degree in secondary education and counseling. Now the long, hot days of summer provide the perfect setting for creating romance. She sold her first book, Dakota’s Bride, the summer of 1998 and her second book, My Angel to Kensington. Her teaching and writing careers have intertwined with raising three children.  Christine’s newest venture is the creation of Rogue Phoenix Press. Christine is the founder, editor and co-owner with her husband. They live in Salem, Oregon.
Website / Blog / Facebook / Twitter / Publisher

Giveaway Details:
Ann Christine will be giving away the following prizes:

Be sure to follow this tour along and leave comments at each site for more chances at these awesome prizes!  Click HERE to visit the other tour stops.