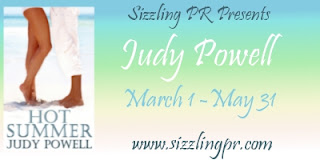 Courtesy of Sizzling PR I’m spotlighting Hot Summer by Judy Powell today. If you like what you are reading there is a chance to win a copy of this book today!  Have fun. 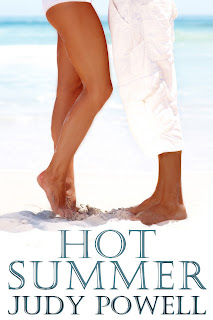 Blurb:
Buy Link: Amazon (Kindle)
A hot-tempered spitfire and a sexy, arrogant man – put them
together and sparks fly!
After her first embarrassing encounter Summer Jones vows to
stay away from suave record producer, Lance Munroe. But then she ends up
working for the man. Her quick temper and sharp tongue keep landing her in hot
water with him but no matter how hard she tries she can’t deny her growing
attraction for him. Then they go on a business trip to Jamaica – and her world
is turned upside down.

Lance is intrigued by the feisty woman who
practically tells him off the first time they meet. When they begin working
together he realizes how much he enjoys the challenge of taming the little
tigress. But, before he knows it, he’s the one caught in the snare of passion.
The tables are turned – the tigress has tamed the lion.

EXCERPT:
As he spoke he leaned back into the couch and peered up at
her through half-closed eyes. She turned away from his gaze and quickly opened
the bottles and poured bubbling liquid into both glasses.
“Here you go,” she said with a smile and handed him the
drink. She sat on the edge of the sofa beside him but as far away as was
polite. She put the glass to her lips and sipped the sharp cold liquid, feeling
the bubbles bursting in her mouth.
She felt his eyes on her and gulped more liquid, then opened
her eyes wide as it flooded her throat. Her eyes burned and she struggled to
swallow but it was no use. Before she could cover her mouth she coughed
violently, spraying her lap and the coffee table with soda.
Summer clapped her hands over her mouth, but too late. The
damage was already done.  Her eyes grew
huge with distress and she looked across at Lance, hot with embarrassment.
“Are you alright?” He’d quickly rested his glass on the
table and was leaning towards her, a large white handkerchief in his hand. She
took it gratefully, still coughing. Then the spasms gradually subsided and she
was able to look at him again. Her eyes were brimming with tears.
“Are you crying?” He looked incredulous, almost out of his
depth, as he raised his hand and wiped away a tear with his thumb.
Summer dabbed at her eyes, sniffed, then looked up at him
again, her lips curling into a grin.  “Of
course not, silly. I’m not crying. It’s the coughing that made my eyes fill up
with tears.” Somehow, seeing him look so nonplussed had made her more at ease
with him.
“Silly, huh?” He smiled back at her.  “You’re the one who gulped down a carbonated
drink too fast and ended up losing the whole lot all over yourself. So, who’s
silly?”
While he was speaking Lance had rested his arm at the back
of the couch right behind her head and had begun to gently stroke her nape with
his thumb. Summer swallowed hard but couldn’t get the lump out of her throat.
“I guess…I am,” she
said, her voice breathless.
“Yes,” he whispered as he leaned forward to press his warm
lips against the side of her neck, “you are.”
Summer’s breath came in shallow gasps as she sat still, not
feeling she could move even if she wanted to. She was like a bird frozen in the
mesmerizing stare of a snake, knowing it was about to be eaten alive but not
able to make a move to save its own life.
She moaned and closed her eyes as his lips stroked the
sensitive skin then moved to the base of her throat where he licked softly and
gently. She didn’t realize that she was still clutching the handkerchief tightly
in her hand until she felt his strong fingers pry hers open to pull it away so
that he could seduce her palm with his thumb.
“Relax, baby.” He moved his lips up her neck and to her
ear.  “You’re so tense. Just relax.”
As he spoke he pushed her back gently into the plush pillows
and began to nibble her ear lobe. He gave a lick just behind her ear and shock
waves ran down her spine.
“Oh, God,” she breathed, “what are you doing to me?”
“What someone should have done to you a long time ago,
Summer Jones,” he whispered.  “Teach you
what it means to be a woman.”
He dipped his head and slid his lips back down her neck,
over her collar bone and down to that oh, so sensitive place between the curves
of her breasts. Here he paused and she held her breath, eyes shut tight,
wondering if he was going to stop now. She prayed he wouldn’t.

She was not disappointed. An involuntary gasp
escaped her lips as he slipped a warm tongue down her cleavage, sliding it
between the orbs and teasing her soft flesh until her body screamed and she
felt she would die from the sweet sensation. She grabbed the back of his head
and pressed him into her, wanting more of the pleasure, more of the sweetness… 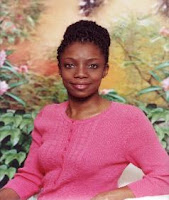 Judy Powell is a writer and marketing consultant who lives in Ontario, Canada. Her works are diverse, featuring romance novels, a historical novel and non-fiction essays which have appeared in anthologies.  Her titles include ‘Hot Summer’ which placed second in the Toronto Romance Writers Contemporary Romance Competition, ‘Hot Chocolat’ – the sequel to ‘Hot Summer’, ‘Some Like It Hot’ – a sensual multicultural romance novel, and ‘Coffee, Cream and Curry’ – a literary work which received the silver medal in a national creative writing competition.

Judy is a great lover of learning which is reflected in the diversity of her studies which includes Masters degrees in Spanish, Marketing, Literature and Creative Writing and a BA in Foreign Languages & International Business. She is a member of Phi Beta Kappa (US Honor Society), Romance Writers of America, Toronto Romance Writers, and Writers and Editors Network of Canada.  She loves to travel and has lived in countries including Puerto Rico, the USA, France, Jamaica and Canada.  She likes to feature diverse cultures in her works.  Learn more about Judy and her books at her WEBSITE.
Giveaway Details:

« Guest Post + Giveaway with J.C. Nikolaiev hero of Hunting the Shadows by Alexia Reed
Where Have you Been??? »