Guest post by J.C. from Hunting the
Shadows
Do you think you know the truth
about everything going on these days? I can tell you, you don’t. I’m
Jaegar-Caleb Nikolaiev, but if you were to look me up in the governmental
system, it would tell you I didn’t exist. Sometimes, I wonder if I really do.
You see, during the Cold War, at
the threat of the development of psychic warfare, our governments teamed up to
do their own research. Out of the Black Budget of the Shadow government, the
Centre was created. Years of experimenting on the homeless and those who have
been forgotten by society eventually yielded results and I am one of those
creations. A monster by some standards.
The scientists created a virus that, with the help of radiation, opened a door
to something they never should have.
Ever heard of cellular memory? It’s
the theory that everything that happens to us is ingrained deep in the cellular
memory of our bodies…of who we are. We always had the ability to do something
more…something not quite explainable. But until this point, we couldn’t access
those paranormal abilities. This isn’t true anymore. Not only have a variety of
psychic abilities been documented, but they can also be measured and trained.
What would you do if you had the
ability to slow time or read the mind of others? What about if you could
manipulate matter at the molecular level? The men and women I serve with were
raised and trained to be weapons, to be prepared for anything and everything.
In my squad we have a variety of abilities:
Amy: Telepathic-empath (with a
secondary ability not quite known)
Stefan: an energy manipulator
Mackenzie: a healer
Ajay: time manipulator, and can
turn into orbs of light
Davan: shadow manipulator
Cameron: manipulator of the
elements
Ariadne: medium
Darilynn: psychometry
As a scientist, I know better than
anyone about the limitations of the human body. We were never quite designed to
host these strenuous abilities and over time, they take their toll. I’ve seen
psychics whose minds have worn thin and brittle under the stress, and those who’ve
developed brain aneurysms because of it.

But it doesn’t matter, we are the preventative
measures, fighting in the wars against terrorism you don’t know about. We are
the Shadows. 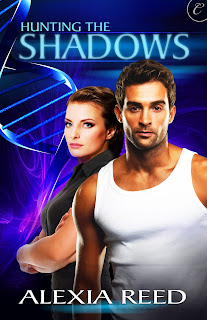 Blurb:
Amy has spent her life in isolation. Locked away in the Centre, a secret government facility where children with extraordinary abilities are raised as highly skilled fighters, she longs for a normal life. A life where being around people doesn’t overload her sensitive telepathic mind. A life where she can’t see through the eyes of a murderer as he hunts down his next victim…

J.C. Nikolaiev was a top researcher, but when his conscience got the better of him, he tried to destroy his work and free his subjects—and was imprisoned as a traitor. To save himself and prevent more people from dying, J.C. must catch the serial killer stalking the halls of the facility. But his only leads come from a woman whose thoughts have invaded his mind…

Finally out of the psych ward, Amy joins forces with J.C. to find the killer before he closes in on them. Can their growing attraction withstand the truths they uncover?

While in reality Alexia Reed resides in Ontario, she likes
to say that she lives in her own little world. A lover of all things scientific
and the paranormal, Alexia uses her books as a way to straddle the realms of
fact and fiction—and always with a healthy dose of romance thrown in.

When not writing and reading, Alexia paints, and is
the caretaker to two neurotic cats.
Where to find Alexia Reed:
Website / Blog / Facebook / Twitter / GoodReads
Giveaway Details:

8 Responses to “Guest Post + Giveaway with J.C. Nikolaiev hero of Hunting the Shadows by Alexia Reed”