I’m excited to blitz you all today with the 411 on an upcoming new adult book titled “Alaskan Nights”.  Check out the guest post from author Nadia Scrieva and an excerpt of Alaskan Nights. Keep reading for a chance to win an ebook copy of Alaskan Nights and be sure to add it to your wishlist or shelf! 🙂 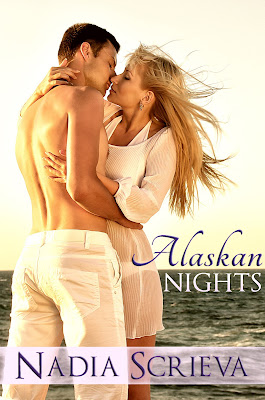 Book Blurb:
When Brynne left Alaska, she promised herself she would never go back.


The day after graduation, she got in her beat-up Honda Civic and drove down the west coast to pursue her dream of becoming a Hollywood makeup artist. Growing up in a rural fishing village with dirty, rundown buildings, and dirty, rundown men, she longed for the glitz and glamour of the silver screen. She had no qualms about leaving behind her dysfunctional family and her nowhere-job at her mother’s fishing tackle shop. She didn’t even think twice about leaving behind the cute boy who came in to buy gear almost every day, shamelessly flirting with her and always leaving a generous tip. Well, maybe she thought about it twice; but she knew that a relationship with Callder Murphy would only be bound to lead her deeper into nowhere. She was sick and tired of being nowhere—and no one.


Brynne set out, determined to prove to the world that she was much more than just a fisherman’s daughter. Unfortunately, her luck and tip money ran out in Seattle when her car broke down. Exhausted from the stress of travel, she decided to take a waitressing job in the city for the time being. “For the time being” ended up being far longer than she would have liked. That was four years ago. Now, a call from home has alerted Brynne to some bad news. She needs to get back to Soldotna promptly, but she has been living paycheck to paycheck and can’t even afford a plane ticket home. Enter a ghost from her past as her knight in shining armor. Unexpectedly showing up outside her restaurant in a red Ferrari, Callder is determined to take her home with him, and keep her there for good.


Perpetually drunken playboy, Callder Murphy, is currently loaded. Of course, that’s only because he stole his big brother’s credit card. He was off in Vegas, doing what he does best (absolutely nothing) when he received the call from home. A name he hasn’t heard in years pulls him out of his mindless haze of stumbling from one wild party to the next: Brynne Ambrose needs his help. Pleasant memories of the rude, tomboyish, and completely adorable girl-next-door come rushing back to him with a vengeance. He drops all of his shenanigans and cleans up his act instantaneously. He uses his brother’s credit card to buy an impressive car, and sets out to win over the girl of his dreams. He knows he’s no good for her, but he can’t stay away.


Callder has been waiting his whole life for the opportunity to be her man, and he’s not going to let her slip away again.
Alaskan Nights Guest Post
Brynne and Callder are two already-beloved
characters from my Sacred Breath series. Many people have expressed interest in
seeing more of their interaction, since they are such a hilarious and oddly
mismatched couple. Callder, the younger brother of Trevain Murphy, is usually
swallowed up in the spotlight of the older man, but in this book, he gets his
moment to shine. Brynne is a brazen firecracker of wit and insults, while
Callder is vulgar and obnoxious, and the two butt heads in the most delightful
ways.

In this story, I dig deeper into their
pasts to a time when Brynne was not the tough and take-no-prisoners chick that
we currently know her to be. We see her as an uncertain and vulnerable
teenager, struggling to find her place in the world. She aspires for greatness,
but constantly finds roadblocks in her way, ones which will harden her and help
her find the right path—and the right people for her life.

Callder is a troubled young man who seeks
to prove himself to the woman he loves. Despite his constant screw-ups, he is
an endearing and sweet guy who turns out to be the perfect foil to Brynne’s
ambition. His laziness works out to be an excellent balance to her drive, and
his feel-good, happy-go-lucky approach to life helps to ease her tension and melt
away her stress.

Come
along on the road trip to Alaska with this fun and crazy couple, and discover
the secrets of their past and the possibilities of their future.

Check out the excerpt!

The tension in the car was
thick. She felt the need to apologize, but she knew that no words would do the
situation justice. She had abandoned and insulted Callder, but the moment that
she had needed him, he had magically appeared to help her. She wanted
desperately to make things right. Turning to her side, Brynne tried to force
herself to speak. Instead, she leaned forward and pressed a kiss against
Callder’s shoulder. She allowed her lips to linger there for a moment before turning
her face to the side and resting her cheek against his bicep.
The sound of squealing brakes
were heard as the car swerved suddenly into the unpaved shoulder. Brynne looked
around in surprise, expecting to see an obstacle or dangerous situation on the
road. But there was nothing around except the colors of the evening sky, which
had  bathed the mountaintops with crimson
light. She was startled when she felt Callder’s hand slip around the back of
her neck, pulling her face against his. His lips mashed into hers with a
demanding and unyielding pressure.
It was nothing like the
silly, theatrical kiss that he had given her back at the café. It was a real
and meaningful touch, filled with unmistakable intent. It was both chastising
and forgiving, all at once. It was also angry. Increasingly angry.
“Why?” Callder asked between
kisses. He leaned forward, crawling over the console in order to pin her
against the car seat with his weight. “Why didn’t you take me with you?”
“Mmm?” Brynne asked, a bit
lost in the unexpected intensity of his attack
“When you left,” he said,
smashing his nose against hers as he cupped the back of her head. “Why didn’t
you take me with you?”
“Mmm,” she responded,
focusing on his mouth more than the question. “I guess… I didn’t think you
would want to come with me.”
“I did,” he told her, in
between kisses. He pressed a hand against her stomach, sliding his fingers up
under her blouse.   “I would have gone
anywhere with you.”
She paused and pushed him
away slightly. “You never told me that. How was I supposed to know?”
“I’m not big on words,
Brynne. But haven’t I always been by your side? Don’t my actions give you a
clear picture of the way I feel?”
“No,” she whispered. “I need
the words too.”
“Why?” he said, kissing her
chin. “Why would you need me to say a bunch of unnecessary, mushy garbage…”
She hit him in the shoulder.
“To differentiate me from the dozens of other girls you bang, just for the fun
of it. To establish this as something real.”
“How can you not see that
this is real to me?” he asked, almost offended by the accusation.
“I can’t see anything,”
Brynne admitted. “I’m completely blind.”
Callder stared down at her in
the fading dusk. “And if I told you—if I tried to find the words, would you
even believe me?”
“Probably not,” she admitted.

He pulled away from her,
moving back to the driver’s seat and starting up the car. “Then I’m not going
to bother wasting my words.”

Brynne felt a sense of
disappointment wash over her, along with a burst of righteous rage. “You
shouldn’t,” she snapped at him. “If it’s not worth it to you, you really
shouldn’t bother. 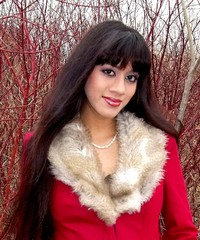 Nadia Scrieva lives in Toronto, Canada with no husband, no kids, and no pets. She does own a very attractive houseplant which she occasionally remembers to water between her all-consuming writing marathons.

Nadia has a degree in English and Anthropology from the University of Toronto. She likes knives. Her writing always features powerful females and (mostly) honorable male characters.

Giveaway is open to US & International residents. Winners will be contacted via e-mail and have 48 hours to respond back to the e-mail. If a response is not received within 48 hours another winner will be chosen.

Now fill out the Rafflecopter form below and see what’cha need to do to earn extra entry points.  Definitely leave a comment.  Tell me what new finds you’ve found recently.