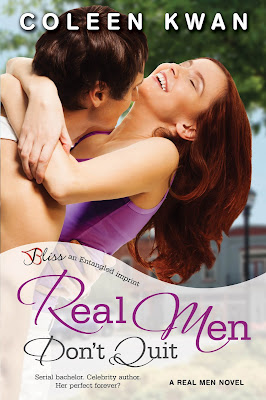 
When famous author Luke Maguire decides to write his next novel in the small town of Burronga, Australia, he’s sure he can ignore the fiery redhead next door. Not only has he just been burned from a high-profile breakup, but he’s never been one to set down roots. No, he’ll finish his novel and leave Burronga. And soon.


Tyler Jones just wants to run her business with her best friend, Ally, and take care of her three-year-old daughter, Chloe. She’s never needed help from anyone, especially not a man, and the brooding, rugged writer next door can’t tempt her. Not in the least.


Only Tyler and Luke can’t stay away from each other. So they set rules. No staying overnight, no future plans, no sappy good-byes when Luke inevitably quits town. But the chemistry between them is too strong to contain in a rulebook. Are Luke and Tyler ready to risk their lives of independence for something more?

In this excerpt Luke and Tyler have just come back from dinner. They’re in Tyler’s house, and Tyler has just put her three-year-old daughter to bed. Luke’s had a rough day. His father, who abandoned the family when Luke was just a boy, has made a sudden reappearance. The encounter leaves Luke dismayed and uneasy, but dinner with Tyler has lifted his mood, and in the quiet of her house he can’t help kissing her. And Tyler’s response only leaves him aching for more.
~~~~~~~~~~~~
Grabbing onto the last remnants of his self-control, he forced himself to lift his head slightly. A soft
groan escaped her as their mouths separated. He stared down at her dilated eyes, mussed hair, and moist lips. Christ, he’d never wanted a woman so badly.

Tyler sighed and reluctantly unwrapped her leg from him. “Wow,” she murmured, running her fingers through her hair. “You sure know how to kiss.”

He swallowed. “You’re not too shabby yourself.”

She was joking, he knew, but it didn’t stop the fire reigniting in his veins. He reached for her again, but this time she caught his hand and twined her fingers through his, forestalling him.

“Luke…” There was a wealth of meaning behind that single word. “I don’t think we should be getting so heavy right now.”

His blood surged in defiance. He tightened his grip on her hand. “Why not?”

“Because…” She drew in a breath. “Because I’m neckdeep in work and Chloe and keeping Gretchen off my back. It’s bad timing.”

He had a feeling she wasn’t telling him the entire truth, but as his oxygen-starved brain belatedly caught up, reason began to filter back. He had a looming deadline to meet, and Tyler was proving too distracting. And besides, after his difficult split with Jennifer, he was supposed to be more circumspect, not running headlong into another noose. Not to mention his dad. Seeing him again, learning about his infidelities, was a sobering reminder to Luke that commitment wasn’t for him.

Then again, he was holding a gorgeously seductive woman, and his body was thrumming with heat. “But I like kissing you. A lot.”

Her lovely lips curled up, and he wanted to crush them again. “I don’t want to stop kissing you, either.”

“We can keep it light and casual.” Lifting their joined hands, he pressed a few small kisses on her fingers and was rewarded by a shiver running through her.

“What does that mean?”

“Um, we don’t go lower than the collarbone, and we don’t go under clothes.” Jeez, what was he signing up for? Could he really keep to those adolescent rules?

But Tyler was already nodding. “And we keep it strictly private.”

He knew why—she didn’t want Chloe seeing them kiss. Her first priority was her daughter, as it should be.

“Strictly private.” He pulled her closer. “I don’t see anyone around now.”

Thanks for having me on your blog today!

Coleen Kwan has been a bookworm all her life. At school English was her favorite subject, but for some reason she decided on a career in IT. After many years of programming, she wondered what else there was in life — and discovered writing. She loves writing contemporary romance and steam punk romance.

Coleen lives in Sydney, Australia with her partner and two children. When she isn’t writing she enjoys avoiding housework, eating chocolate, and watching The Office.

Coleen will be giving away 3 – $10 gift cards at the close of the tour. Gift cards will be good for Amazon, Barnes & Noble or Kobo (winner’s choice).