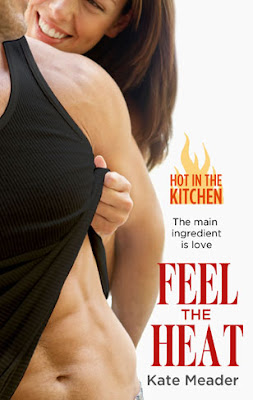 Photographer
Lili DeLuca spends all her time managing her family’s Italian restaurant,
instead of following her dream of getting an MFA. When famous British chef Jack
Kilroy unexpectedly challenges her father to a cook-off, Lili decides she’s
tired of playing it safe and vows to seduce the tempting Brit. But once a video
of her and Jack kissing goes viral and her luscious butt starts trending on
Twitter, Lili fears she’s cooked up a recipe for disaster.

Jack
Kilroy’s celebrity has left him feeling used and used up. While Lili’s
oh-so-sexy moans when she tastes his delicious creations turn him on, he’s even
more aroused by how unimpressed this beautiful, funny woman is with his fame.
He knows they could be amazing together, if she could only see past his bitch
fork-wielding fan base. Now, as he’s about to start a new prime time TV cooking
show, can Jack convince Lili to realize her own ambitions – and turn up the
heat in his kitchen?

Chefs Do it Better by Kate Meader

Thanks to Ing for letting me talk hot chefs here at As the Pages Turn, specifically one gorgeous chef: Jack Kilroy, British, famous, arrogant… and hot-as-a-griddle. What is it about chef heroes that make us swoon? Let me count the ways…

1. Not to overstate the obvious, but let’s get it out of the way, shall we? They cook! What woman doesn’t love that? It’s fairly safe to say that most women love when a guy makes a meal—and when he’s an award-winning chef at a Michelin-starred restaurant (or two), then the lucky lady is pretty much picking up knife and fork and saying, “Feed me.” After a particularly rough morning when Lili, the heroine in Feel the Heat finds out her hot smooch with the most famous chef in the Western hemisphere went video viral and now her butt’s trending on Twitter (oops), Jack cooks for her. It doesn’t make it all better, but it sure does help.

2. Cooking is about crafting an experience and creating emotion: it invokes all sorts of primal feelings from nostalgia to comfort to just plain arousal. A hero who can get his woman into that emotional space is worth another look, don’t you think? When Jack cooks for Lili, she feels special and loved…not a small thing for a woman who thinks she’s too average for a grand passion.

3. The chef hero is a leader in the kitchen and his bossy alpha-ness usually translates in a very sexy way to the rest of his life. This guy usually knows what he wants whether it’s how that night’s dinner service should play out or what’s on the menu in the bedroom. By the time Lili and Jack get hot and smoldering between the sheets, he’s clear about his desires—and not afraid to tell her.

4. Chefs are creative individuals. They have to regularly invent stunning dishes that take diners to new levels. They have to think on their feet when the kitchen is short two commis chefs and the back row of burners has decided to go kaput in the middle of the worst service in history. And they bring that creativity into other areas, such as using goat cheese caramel gelato to woo AND as a topping on his woman’s silky skin. Yes, that happens in Feel the Heat. (Recipe here!)

5. It’s all about the hands! Have you ever seen how fast those hands move on TV cooking shows as they chop and julienne and mince? A chef’s hands are often scarred and callused from years of abuse in the kitchen. Combine that with the make-your-vision-blur skill level and think what those instruments could do to a woman’s body. Are you thinking about it? Lili thinks about it. She thinks about it a lot 😉

Follow the “Feel the Heat” tour peeps.  Check out the other fantastic guest post, Q&A and excerpts that is happening at the other tour stops.  Click the pic below to see list of stops. 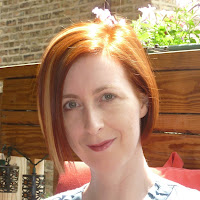 Kate Meader writes contemporary romance that serves up delicious food, to-die-for heroes, and heroines with a dash of sass. Originally from Ireland, she cut her romance reader teeth on Catherine Cookson and Jilly Cooper novels, with some Mills & Boons thrown in for variety. Give her tales about brooding mill owners, oversexed equestrians, and men who can rock an apron, and she’s there. She has a bachelor’s in law (useless), a master’s in history (not as useless), and another master’s in library and information science (yay, using). When not writing about men who cook and the women who drool over them, she works in an academic library. Her stories are set in her adopted home town of Chicago, a city made for food, romance, and laughter – and where she met her own sexy hero.

Kate is offering up a tour wide giveaway.  One grand prize winner will get a Feel the Heat Swag Bag containing a Supper Hero-Wonder Woman apron, a Feel the Heat tote bag, a Vespa-shaped pizza cutter, a “Grate Love” cheese grater, heart-shaped measuring spoons, a Feel the Heat fridge magnet, heart-shaped pasta, delicious cookies, and a recipe card for goat cheese caramel gelato. She will also be giving away smaller swag bags of assorted kitchen utensils and more!  Go HERE to see pics of goodies being offered!