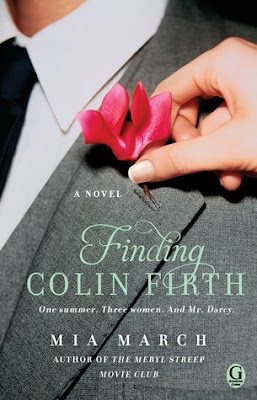 After losing her job and leaving her beloved husband, journalist Gemma Hendricks is sure that scoring an interview with Colin Firth will save her career and marriage. Yet a heart-tugging local story about women, family ties, love, and loss captures her heart— and changes everything. The story concerns Bea Crane, a floundering twenty-two-year-old who learns in a deathbed confession letter that she was adopted at birth. Bea is in Boothbay Harbor to surreptitiously observe her biological mother, Veronica Russo—something of a legend in town—who Bea might not be ready to meet after all. Veronica, a thirty-eight-year-old diner waitress famous for her “healing” pies, has come home to Maine to face her past. But when she’s hired as an extra on the bustling movie set, she wonders if she is hiding from the truth . . . and perhaps the opportunity of a real-life Mr. Darcy.

These three women will discover more than they ever imagined in this coastal Maine town, buzzing with hopes of Colin Firth. Even the conjecture of his arrival inspires daydreams, amplifies complicated lives, and gives incentive to find their own romantic endings. 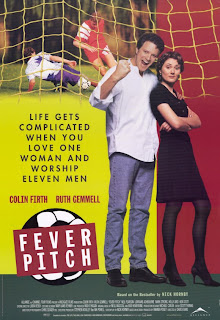 I’ve been swooning over Colin Firth since 1995, when as Mr. Darcy in the BBC miniseries of Pride & Prejudice, the Oscar-winning British actor first came to my attention in a “Who IS that?” moment of jaw-dropping wonder. To date, he played over seventy roles, with several in post production. How I missed Fever Pitch back in 1997, I’ll never know, since it was the beginning of my love affair with Colin Firth, complete with little photo of him on my bulletin board at work.
The film, written by Nick Hornby (and based on his novel), hadn’t even been on my radar. Because it’s about a crazed soccer fan? Because I have no interest in soccer whatsoever except when it comes to photos of David Beckham? I’ve loved other films based on Nick Hornby novels (High Fidelity; About a Boy) and I LOVE Colin Firth, but this gem of a film slipped past me for years! (P.S. There’s an American version of the movie, starring Jimmy Fallon and Drew Barrymore, but I haven’t seen that one.)
Colin, with wild hair, plays a serious fan of a British football team (Arsenal), and his passion—which brings him incredible highs and lows—is actually even greater than his ardor for his new girlfriend, played by fellow high school English teacher Ruth Gemmell, who was completely new to me and lovely to watch. The famous Colin Firth intensity and integrity are on full display in Fever Pitch. It’s incredibly enjoyable and a real treat!
The three main characters in my new novel, FINDING COLIN FIRTH, each wants to find Colin Firth for very different reasons. Rumor has it that the actor is coming to a small Maine town to film scenes from his new movie, and 22 year old  Bea, nervously connecting with her birth mother; 38 year old Veronica, baker of healing pies and an extra on the film, and 29 year old married journalist Gemma with a big secret, each have ties to the actor that bring them together. If you have a chance to read the novel, I hope you enjoy it!
*ABOUT AUTHOR*

I’m the author of T 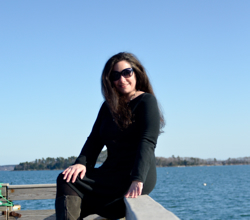 HE MERYL STREEP MOVIE CLUB (June 2012, Simon & Schuster) and FINDING COLIN FIRTH, coming July 2013 (a spin-off of TMSMC). I live on the coast of Maine, the setting of the novels, with my ten-year-old son and our very sweet beagle.

I’ve been swooning over Colin Firth since I first saw him in the BBC version of Pride & Prejudice back in the mid 90s. (I’m also crazy about Love Actually and Then She Found Me.) I wondered what it would be like if rumors had it that Colin Firth was coming to a small coastal town in Maine to film his new movie, and a new novel came to life.