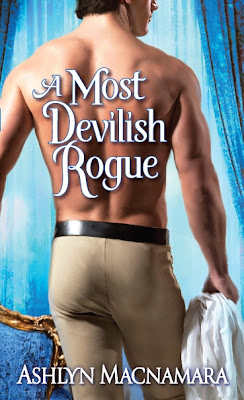 
Years ago, when Isabelle Mears was still a young miss too infatuated to know better, she surrendered her innocence to a dishonorable man. Though ruined and cast out from society, she has worked hard to shelter her illegitimate son, Jack. Having sworn off men in her quiet but dignified life, Isabelle is unprepared for the deep longing that rips through her when a handsome stranger rescues her rambunctious six-year-old from the pounding ocean surf.


George Upperton is a man in trouble with debts, women, and a meddling family. He is, by all accounts, the last gentleman on earth Isabelle should be drawn to. But loneliness is a hard mistress, and caution gives way to desire . . . even though Isabelle is convinced that happiness can’t be found in the arms of such a devilish rogue. Only when Jack is kidnapped does Isabelle discover the true depth of George’s devotion—and how far a good man will go to fight for the woman whose love is all that matters.

This interview is a bit of a group effort. I had to come up with my own questions for it, and I’m not really very good at that, so I asked my friends to send me some ideas. The following questions were all submitted to me by various people.

Q: If you could travel anywhere, where would you go and what mode of transportation is your preference?

A: To me, anywhere includes fictional places, and now I’m going to reveal my inner geek. Since I was a teenager, I have always been a fan of the Lord of the Rings and I’ve always wanted to go to Middle-earth. I’m not too sure how I’d get there, though, besides through the printed word or the movies.

A: I can almost say they’re combined into one moment. In 2011, I was a finalist in the Golden Heart® contest, which recognizes the best unpublished romance manuscripts. The finalists in this contest get a special invitation to a champagne reception along with the Rita finalists of that year (the Rita being like an Oscar for the best published romance novels). In 2011, one of my favorite authors, Tessa Dare was also nominated for a Rita, which meant we attended the same reception. That year I was a little overwhelmed with everything that was happening to me—I’d finaled in this big contest, signed with an agent, and sold my first book within a matter of a few months. There was no way I was going to approach the published authors at that reception. So imagine my delight, shock, and surprise when Tessa Dare came up to me and introduced herself. And then naturally, I was too shy and star-struck to do anything but mumble a few niceties. I guess (I hope) she realizes I’m not a complete dork; at least, she gave me an awesome cover quote on my first book A Most Scandalous Proposal.

Q: Would you get along with your characters in real life?

A: I suppose that all depends on the character. I think I would get along swimmingly with George, the hero of my second book, and Rufus, one of the heroes of my first book. I like to think I’d be good friends with my heroines, for the most part, too. I’ve got a couple of characters, though, that I’d just as soon slap as anything, but they’re meant to be that way.

Q: Which fictional character do you have a secret crush on?

A: Faramir from Lord of the Rings for one, and we’re talking about his book incarnation. If we’re talking the movies, I’m an Aragorn girl all the way. I also may have developed a crush on George Upperton, hero of A Most Devilish Rogue (and that was before I saw my book cover and learned he had some very nice, um, hindquarters). When I was writing the first book in the series, I had to stop him from stealing scenes, and I knew at that point I’d have to write a book that featured him.

Q: Do you listen to music while you write? If yes, what do you like to listen to?

A: Not usually. I normally like it quiet so I can concentrate. But I’ve been known to listen to certain songs to get me in the mood to write love scenes. For a long time, it had to be Simple Minds’ “Let There Be Love.”

A: When starting? Stare at the blinking cursor and panic??? Last thing, I definitely celebrate by doing a Snoopy dance and breaking out a wine cooler or two.

Q: Considering a book from the first word you write to the moment you see it on a bookstore shelf, what’s your favorite part of the process? What’s your least favorite?

A: I come from a fan-fiction background, meaning for a long time I wrote chapters serially, had some friends proof them for me, and put them up without any further editing. So when I got into writing original fiction, I was concerned about how I’d react to substantive edits. And I’m surprised that I enjoy that part the most now. You can actually see your story getting better before your eyes. And now I wonder if, as a result, I don’t like the first draft so much anymore. I keep thinking of all the things I have to go back and fix.

Now those were the easy questions. But then I made the grave error of asking my really close friends to contribute something. Guess what they wanted to know about? Yeah, those scenes.

Q: Do you ever write sex scenes in public or do you feel the need to do it in your house, door closed, blinds shut?

A: I, uh, have been known to draft them in public. I have done a lot of my drafting long-hand, and when my daughters had braces, I spent a lot of times in waiting rooms. Naturally, I had to bring something to do. I was comfortable writing that sort of thing, though, because while I write in English, I live in the French-speaking part of Canada. I relied on the language barrier to keep anyone who happened to look over my shoulder from realizing what I was writing. Plus I have very bad handwriting—so bad I can’t always read it when the time comes to type my scenes into my computer.

Q: Who are you most embarrassed about reading your books?

A: I’m not embarrassed, per se, but I’m not completely comfortable with my dad reading my work. Of course, when I sent a copy of my first book to my parents, my mom went out of her way to inform me that my dad went through looking for the racy parts. I really, really didn’t need to know that.

Q: Do your daughters read your books and how do they feel about their friends knowing that their mother is a writer of romance novels?

A: They don’t, but I think it’s because they don’t really want to. If one of them picked up an author copy and read it, I wouldn’t mind so much. But neither of them read the genre that I know of. I don’t think they mind their friends knowing, either. They’ve certainly told their friends about it. I think they think it’s more of a cool thing than anything else.

Go HERE to read the first chapter of A Most Devilish Rogue. 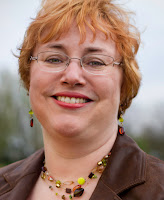 Ashlyn Macnamara writes Regency romances with a dash of wit and a hint of wicked. She considers this writing gig her midlife crisis, but figures it’s less risky than rock climbing or skydiving. When not writing, she looks for other excuses to neglect the housework, among them knitting, reading and wasting time on the internet in the guise of doing research.

(1) paperback copy of A Most Devilish Rogue up for grabs. Giveaway is open to US and International residents only where Book Depository SHIPS to.