***I received this book for free in exchange for an honest review. This does not affect my opinion of the book or the content of my review.***

A girl who needs to undo the past.
A boy who wants to forget it.
In love, there’s no way back.

At high school in Steep Hill, Kansas, Cassie O’Malley and Josh MacBride were the poster couple for quarterback/cheerleader romance until they starred in their own tale of teen pregnancy. No need to say: their shotgun wedding was low-key. But when there was no baby anymore, they went their separate ways.

Five years later, Josh has breezed through Georgetown and is about to finish his post-grad degree at Oxford University. He is set to join a lobbying group on Capitol Hill, owned by his new fiancée’s father. For Josh, the sky is now the limit… only he must first take care of a tiny legal matter: technically, he’s still married to the girl who broke his heart.

Meanwhile, Cassie has been waiting tables in Steep Hill to pay for her sick grandmother’s care. On the day of the old lady’s funeral, Cassie is served with two sets of papers. Josh is asking for a divorce. Her heart squeezes, but, well, he moved on a long time ago. But the second envelope shakes Cassie to the core. So, for the first time, she leaves Kansas and heads to good ol’ England.

There, Cassie finds that Josh has not just “moved on,” he’s freakin’ engaged to some blue-blooded heiress. The feelings Cassie had buried deep rush back to her. But no matter if he keeps thrusting the divorce papers under her nose, she needs him to save the only person she loves more than Josh, more than life itself…


My Review:
I was really looking forward to reading this book. I loved the synopsis and this sounded up my alley. The story beautifully and seamlessly alternates between past and present. The readers are taken back and shown how much these two young people LOVED each other. Cassie was Josh’s world and Josh was Cassie’s world. Josh is the star quarterback, perfect student and perfect boyfriend who worships Cassie. His family is wealthy and to the outside world perfect. Cassie was orphaned at a young age and raised by her grandmother. Her life hasn’t been roses and cupcakes…but her one shining thing in life has always been Josh. Josh has a bright future and is set to go to Georgetown University. An unplanned pregnancy and marriage to the love of his life doesn’t phase him. He’s optimistic life will work out for them and that they could have it all.

We are taken back to the present and now this young love is no more. Cassie is still living in their small town waiting on tables. She hasn’t seen Josh in six years and there is no more baby. Cassie is alone and you can feel her heartbreak. She has just lost her grandmother and her last ties to this small town. She can finally leave this place that is a constant reminder of her heartbreak. On the day of her grandmother’s funeral Cassie receives divorce papers from Josh and news that will force her to seek out Josh and ask for his help!

Sometime one decision in your life can change the course of everything. Cassie more than anyone knows this to be true. She made a decision and kept secrets from the love of her life six years ago. At first I was really annoyed with Cassie. I was annoyed at the decision she made and I was annoyed a bit at how she just came back into Josh’s life and rocked it with some big news and expected him to make a decision right away. She even at one point told him to do what was right and all I could think was seriously?? You are joking right girlfriend? LOL. As the story progressed though, I really started to hurt for her. She made decisions that whether they were right or wrong were made with the bestest of intentions meant to give Josh the opportunity to follow his dreams. Her heart was in the right place and I could feel how much losing Josh hurt her. Her love for Josh is very much still there and it was heartbreaking watching her try to be strong watching the man she has always loved moving on without her. There is one scene that was set in the past where Cassie’s character completely won me over. When she proposed to him…something in me just finally clicked with her character. From there I was a fan. I cried and my heart broke when she made the most heart wrenching decision again to give the people she loves the best of opportunities.

Josh’s heart was broken by Cassie six years ago. She was his world and the decisions she made completely changed him. He is finally ready to move on with his life with a new love. He and his fiancee Lenore are just recently engaged and have a bright future in front of them. He never thought he’d get over Cassie but Lenore has brought some light in his life. When Cassie shows up on his doorsteps after six years and rocks his world with her news his new world comes crashing down on him. He should hate Cassie but finds that he is still very much angry, attracted and cares for her. He wants to hate her but can’t. Their connection is still there and still very strong. For the last six years he has shut out everything from his past. He hasn’t even told his fiancee that he is still married or anything of his past. I really like Josh’s character. All his emotions and reaction to Cassie and what she reveals was so real. It’s how I think anyone who hears news like this would react.

This book was pretty emotional. I found myself tearing up several times. Their story really sucked me in and I was engrossed. I felt all their hurts, pain, frustration and happiness. The connection between Josh and Cassie is very strong. You aren’t just told that there is a strong connection, the way Marion told the story you could literally feel it. There were times I wasn’t sure there would be a happy ending for these two because of the history and lies between them, but alas true love conquers and they do find their way to each other again. The book isn’t a cliffhanger but Josh and Cassie’s story isn’t done. I’m looking forward to reading more about these two. Can’t wait to find out how it will all work out in the end for them and where, Marion will take these characters. There are secondary characters in this book who stole my heart too. I hope we hear more from Sam and Lenore. I’d love to see a story for each of them. I can’t wait for more from this author. This was angst filled book. Readers will be taken on an emotional journey and you’ll come away loving these flawed but real characters.

Books in this Series: 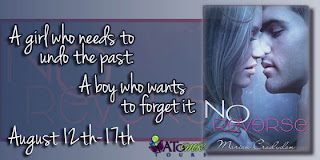 The following prizes are up for grabs. Fill out the form below to enter to win. Good luck!