*Book Review & Jared Guest Post*
Until You by Penelope Douglas 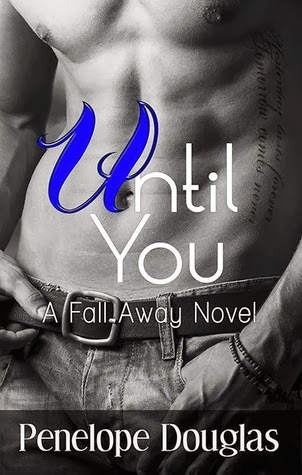 *Synopsis*
***This novel contains graphic sexual content and harsh language. It is only appropriate for adult readers age 18+.
Have you ever been so angry that hitting things felt good? Or so numb that you actually felt high? The past few years have been like that for me. Traveling between fury and indifference with no stops in between.
Some people hate me for it, while others are scared of me. But none of them can hurt me, because I don’t care about anything or anyone.
Except Tatum.
I love her so much that I hate her. We used to be friends, but I found out that I couldn’t trust her or anyone else.
So I hurt her. I pushed her away.
But I still need her. The sight of her centers me, and I can pool all of my anger into her. Engaging her, challenging her, bullying her…they are my food, my air, and the last part of me that feels anything human.
But she left. She went to France for a year, and came back a different girl.
Now, when I push, she pushes back.
Buy Links – Until You
Amazon I Amazon UK I B&N I iTunes I Kobo I Smashwords
*Jared Guest Post*

The first time I saw Tate was like the start of a new day. Everything in my life was beautiful. She was like an angel, and I was lucky enough to get to live next to her.

Thinking back, I think she had me from the moment I looked out my living room window and saw her riding her bike in the street. Who can explain that? I mean, she hadn’t even spoken yet, and I was hooked.

And then we met in the tree, and her snippy little attitude tried to cover up what was breaking inside. It was like looking in a mirror. We needed to be kids, but we were growing up too fast. We came together just in time to catch each other.

The person made for you is the person you can grow with. The person that constantly keeps you hungry. She tastes like the best home I’ve ever had every time I kiss her. I’ve never felt that connection, that need, that craving with anyone else.

And I never will. 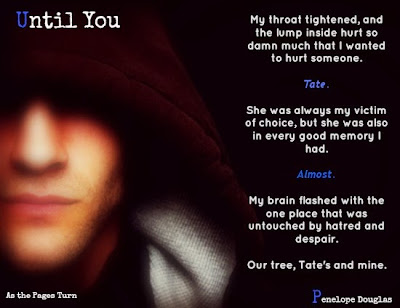 *** This book was provided by the author for an honest review.  No compensation was received and all opinions are my own. ***
My Thoughts:
You know that feeling where you crave a certain food so bad that you can literally taste that sucker and you won’t be satisfied until you eat it? Once you indulge in your craving this euphoria settles on you and you feel all full and complete? Well waiting for UNTIL YOU to release and then finally reading the dang book gave me those exact same feelings. I was floating on cloud nine. I didn’t think that I could love Jared more but I did after reading HIS story. Until You is book #1.5 of the Fall Away series and is the companion novel to Bully. This is told from Jared Trent’s POV. I think Penelope said it best in her note from the author section, “This is NOT a retelling of Bully. This is Jared’s story.” Truer words have never been spoken.  This was definitely Jared’s book all the way. Penelope lets the readers in and took us on a roller-coaster ride full of bumps, thrills and joy. 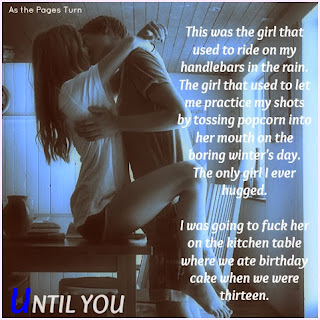 I loved, loved, loved BULLY. I didn’t always agree with how Jared treated Tate half of the time in that book. Even though he was such a jerk face I still fell in love with him in Bully. I wanted in badly inside his head. When Penelope announced that she would be writing a book from Jared’s POV, I fist pumped the air and jumped up and down squealing like a 10 year old girl! Finally we’d get to hear what Jared was thinking in some places during Bully and finally we can get a better understanding how someone could turn so against and so mean towards someone who was their world and best friend.
Did Until You deliver for this fan? Fudge YES it did. That one summer spent with his father was a freaking nightmare. If I could reach in and tear Thomas Trent a new a-hole I would have. That man put Jared and his brother Jax through hell. My heart broke for the both of them. Especially Jax. I can’t imagine what a nightmare it was for Jax living that whole time with a father like that. What Jared’s father put him through messed him up so bad that something in Jared broke that summer. I hate that Jared turned on Tate. I wish he would have reached out to her but I get it.  I totally get where his head was and how he could have flipped things into what it was. Does any of it still excuse his treatment of Tate, heck no but I get it. 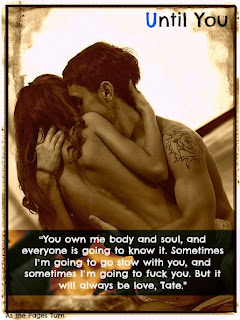 As it’s been stated this was definitely not a retelling of Bully. We get so much more new information in this book. We saw what Jared was up to while Tate was away. We got to see more Madoc, who is Jared’s best friend and partner in crime. I can’t wait for Madoc’s book. Madoc is freaking funny. He’s so silly and had some of the funniest lines in this book. His and Fallon’s story is going to be great. That girl is going to take that boy down a notch. I totally fell in love and have a massive crush with a Tate’s dad in this book. Mr. Brandt plays a bigger role in Jared’s book. I love his no BS policy and how he told Jared like it is. His advice and wisdom was something Jared was missing in his life. I was so glad that he got that from Mr. Brandt. He got something he never had and respected it. Jax…oh Jax you are going to be trouble and I have a feeling you are going to make my heart break. I am so scared to know what happened to Jax. His story I have a feeling will be even more devastating. Sigh I can’t wait.
Now let’s get to K.C. who was Tate’s best friend.  I hated that girl so much in Bully. She broke the girl code and really hurt Tate in Bully. I wanted to pull her hair and slap her silly in Bully. I wasn’t sure how Penelope would redeem her in Until You. I wanted to know how Jared could use K.C. in that way to hurt Tate and I wanted to know how K.C. could have even contemplated being with Jared and hurting Tate. I got my answers. Did it make me hate K.C. less. Yes it did. I don’t love her but I like her enough now. I am hoping and don’t get mad other Fall Away fans but I want to hear more about K.C. She has a story and I am hoping she gets one! 🙂
Tate’s voice is more in the background in this book. For me I STRONGLY recommend you read Bully first before you read Until You. It will add to the experience. But her voice during Bully was very strong that even though all of this was from Jared’s POV there were many times her voice was in the background in my head talking smack back to Jared. I love Tate. Seeing Tate from Jared’s eye I fell in love with her more. I’m so glad to see her put Jared in his place at the end and told him like it is. Jared needed to hear that. I don’t think he ever really got it until that moment or he just tried to gloss it all over in his head. 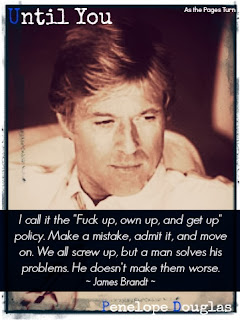 OMERGAWD!!!! I can’t tell you how much I LURVED being inside Jared’s head. Guys tend to be dirtier and raunchier with their thoughts. Being in Jared’s head was like being allowed in a bookstore with no money limit to buy books. I was all over the place squeeeing and just falling in love with him and was greedy. I knew this book was going to be HOT because Penelope teased us. But boy howdy freaking holy oh…that boy was mind f–king Tate all over! Several times I was cuing the porno jingle in my head while reading. Oh how I loved it. Besides the sexier scenes just seeing the more emotional moments through Jared’s eye was refreshing. I felt like I was reading a whole new book and feeling all those same emotions I felt while reading Bully. There was a very touching moment with Jared and his mom. It was a very poignant moment between two people who have drifted apart so much. I’m glad the rift is slowly closing.
Fans of Bully will not be disappointed with Until You. Penelope Douglas delivers big time and meets all the expectations that this fan had for Until You. Being inside Jared’s head was one crazy emotional roller coaster ride. With the addition of Until You, Penelope has become an author I trust and will automatically buy anything this woman writes. I recommend this series with all my heart. If I could marry this series and have a family with it I so totally would! 🙂
RATING

Purchase book 1 of the Fall Away series 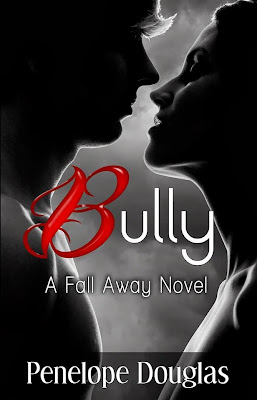 Buy Links – Bully (SALE $0.99)
Amazon I Amazon UK I B&N I iTunes I Kobo I Smashwords
50% of all sales from Bully will go towards PACER.org which is an anti-bullying organization 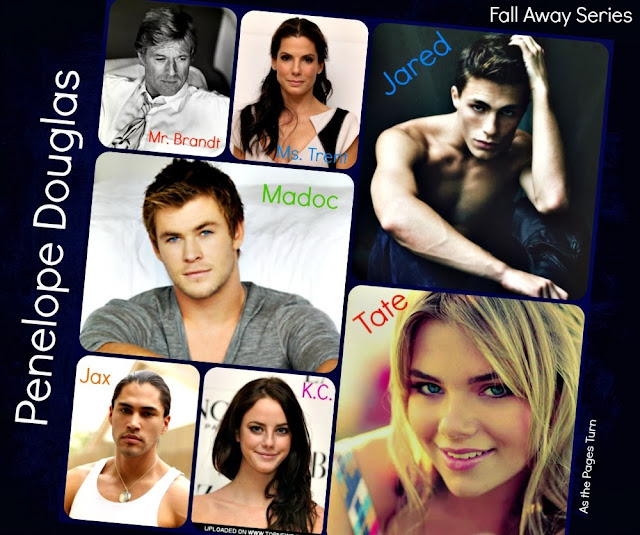 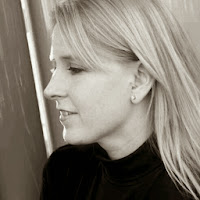 Penelope Douglas is a writer and teacher in Las Vegas. Born in Dubuque, Iowa, she is the oldest of five children. Penelope attended the University of Northern Iowa, earning a Bachelor’s degree in Public Administration, because her father told her to “just get the degree!” She then earned a Masters of Science in Education at Loyola University in New Orleans, because she hated Public Administration.
One night, she got tipsy and told the bouncer at the bar where she worked that his son was hot, and three years later they were married. To the son, not the bouncer. They have spawn, but just one. A daughter named Aydan. Penelope loves sweets, the show Sons of Anarchy, and she shops at Target almost daily.
*Connect with Penelope*
Website I Facebook I Twitter I Pinterest I Goodreads
Fan Made Book Trailer 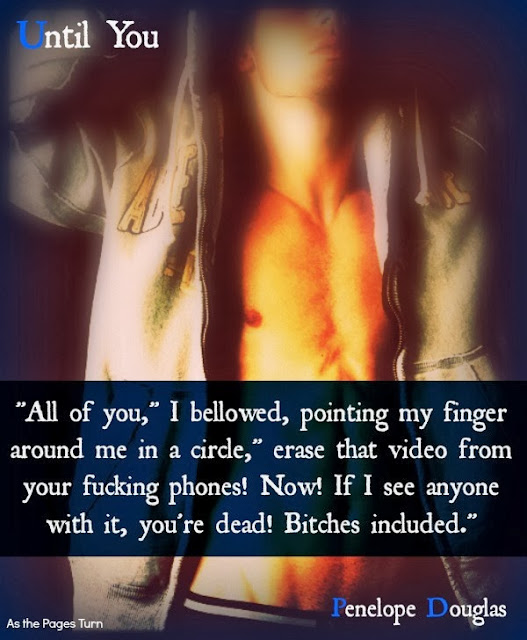 Did you miss any of the fun from the previous days? Have no fear you can go here to catch up: http://bit.ly/18OG4FB
Want more Bully and Until you stuff be sure to check out the below and also check out the other stops for excerpts, QA, guest post etc…See I’m not obsessed at all! 🙂
Jared POV scene “Break Stuff
Deleted Scene Part I from BULLY
Deleted Scene Part II from BULLY
The SClub Books Interview with Jared
Three Chicks and Their Books Interview with Jared and Tate
Happily Ever…Book Hungover Interview with author Penelope Douglas
Chapter One of Until
Q&A with Madoc
Jared Stays at Tate’s while she’s in France – Until You
Kitchen Table Teaser – Until You
Meet Jax Teaser – Until You
Compass Teaser – Until You
Payback – Until You
Bully Tour  – Q&A, Guest Post, Deleted scent…etc
Jared & Tate Birthday Celebration
*Giveaway*