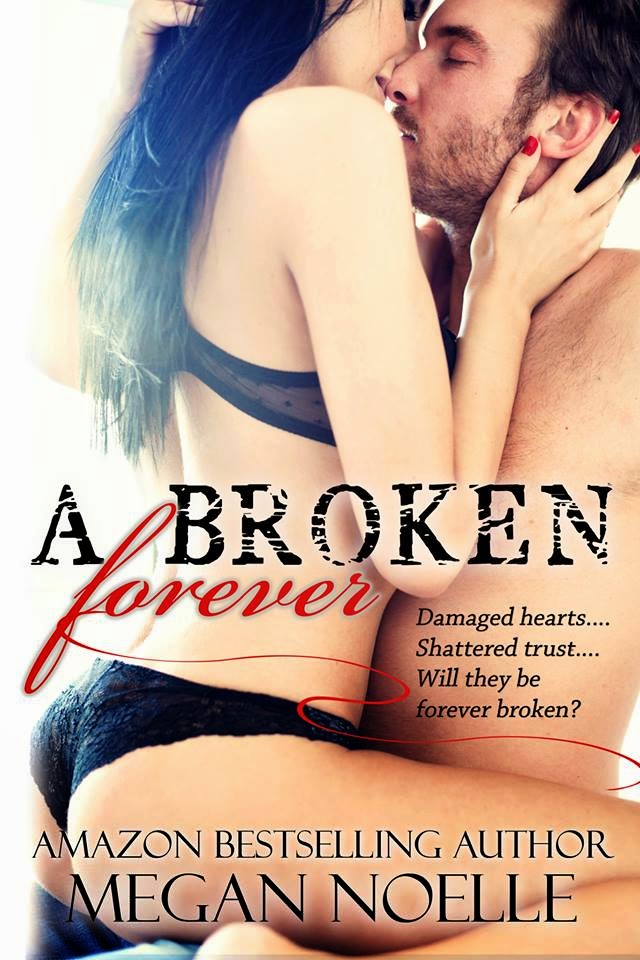 Synopsis
Grey and Stefan knew from the moment they met that they were destined for one another. Despite the none-too-quiet protests from his family they married straight out of high school. Their love was strong and only grew when a year later they welcomed their baby girl into the world.

Life was perfect…until one night changed everything.

Grey had never been so alone. Stefan had died inside the day their child did. Doing the only thing she could to save herself, she ended their marriage.

Stefan Harrison is the most eligible bachelor with a wallet and company that continues to grow. Every night he has a different woman on his arm with the next not far behind. Grey Desmond is the lead stylist and co-owner of a reputable salon with the perfect fiancé and a beautiful wedding in her future.

But one chance meeting between Grey and Stefan is all that is needed to reawaken the feelings from the past.

She tries to avoid him but he won’t let her. Losing Grey was Stefan’s biggest mistake and he won’t stop until he wins her back. But Grey doesn’t know if she could ever trust him again. Leaving her heart to decide between the perfect future…or the past she never let go. 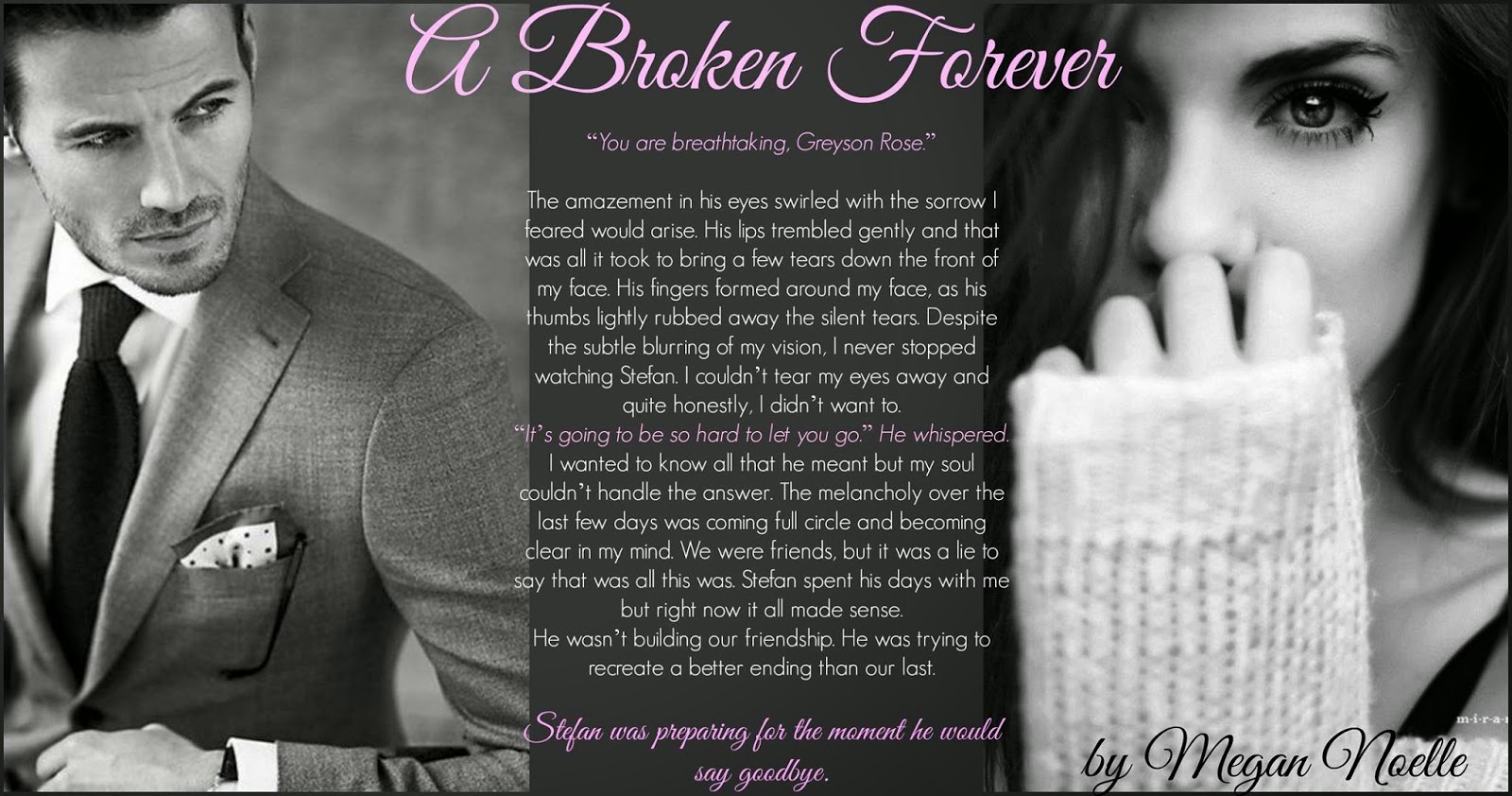 He moved his face closer to my neck, and slowly guided his nose to the sensitive spot behind my ear. My neck fell back to his shoulder giving him an unguarded access to my skin. Tenderly his lips slid against my trembling skin, placing only a single kiss at the base of my throat.

My body ached for more but the last shred of restraint I had told me I needed to stop. His arms wrapped around my waist, sealing my back against his chest.

Stefan twisted me around to face him. The blazing fire in his eyes made my core quiver.

He pressed his body against mine, pinning me against the counter. His hooded eyes filled with the same desires that pooled in my center.

“Don’t play dumb, Greyson Rose. We can never just be friends. Every single time I’m near you I want to pin you beneath me and feel your body shake with mine. Every touch we have reminds me of everything we had, and I want it back. I don’t care that you’re engaged. You were mine first, Greyson Rose.”

His dough covered hands moved from my hips, under my shirt and locked around my bare waist. Stefan’s hands were rough but gentle, calloused and smoothed and my fight to remain faithful floundered.

He brought his lips down to mine, but stopped before our mouths could touch.

“Whatever you want to say won’t change the facts. You will always be mine, Greyson Rose. Now just…” He brushed our noses together, and backed away a few painful inches.
“Just give in to me, baby. Stop fighting it.” 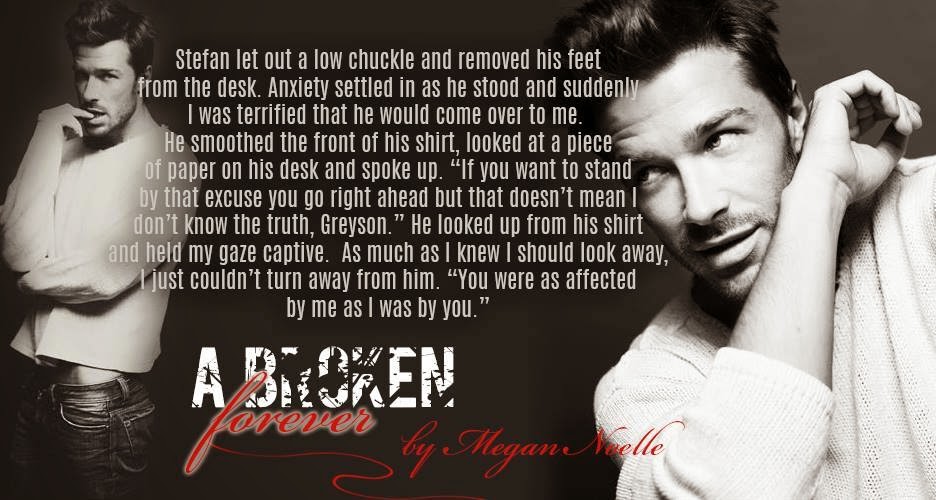 ♥A Broken Forever – Song List♥
Over You by Miranda Lambert
Jesus, Take the Wheel by Danielle Bradbery
A Broken Wing by Martina McBride
To Build A Home by The Cinematic Orchestra
You by Switchfoot
So Long, Goodbye by 10 Years
Fallen by Sarah McLachlan
Tears in Heaven by Eric Clapton
Give Me a Sign by Breaking Benjamin
The Mess I Made by Parachute
Right Where it Belongs by Nine Inch Nails
In Another Life by The Veronicas
The One That Got Away (Acoustic) by Katy Perry
Pieces by Andrew Belle
Without You by Ashes Remain
Anthem of the Angels by Breaking Benjamin
Blue Eyes Blue by Eric Clapton
Silhouettes by Of Monsters and Men
She Will Be Loved by Maroon 5
Never Stop (Wedding Version) by SafetySuit
Hear You Me by Jimmy Eat World
Nobody Knows by The Tony Rich Project
Sweetest Sin by Jessica Simpson
I Miss You So Much by TLC
I’ll Be by Edwin McCain
The Power of Love by Gabrielle Aplin
If You Ever Come Back by The Script
Have You Ever? by Brandy
Torn by LeToya
Your Lullaby by Adrian Von Ziegler
(Today I Met) The Boy I’m Gonna Marry by Darlene Love
The Way You Look Tonight by Steve Tyrell
What Hurts the Most by Rascal Flatts
End of the Road by Boyz II Men
All I Want by Staind
She Wouldn’t be Gone by Blake Shelton
Cannonball by Damien Rice
If You’re Not the One by The Love Allstars
Pieces by Red
Bleeding Love by Leona Lewis
Say It by Ne-Yo
Such Great Heights by Iron & Wine
Poison & Wine by The Civil Wars
Let it Hurt by Rascal Flatts
How’s It Going to Be by Third Eye Blind 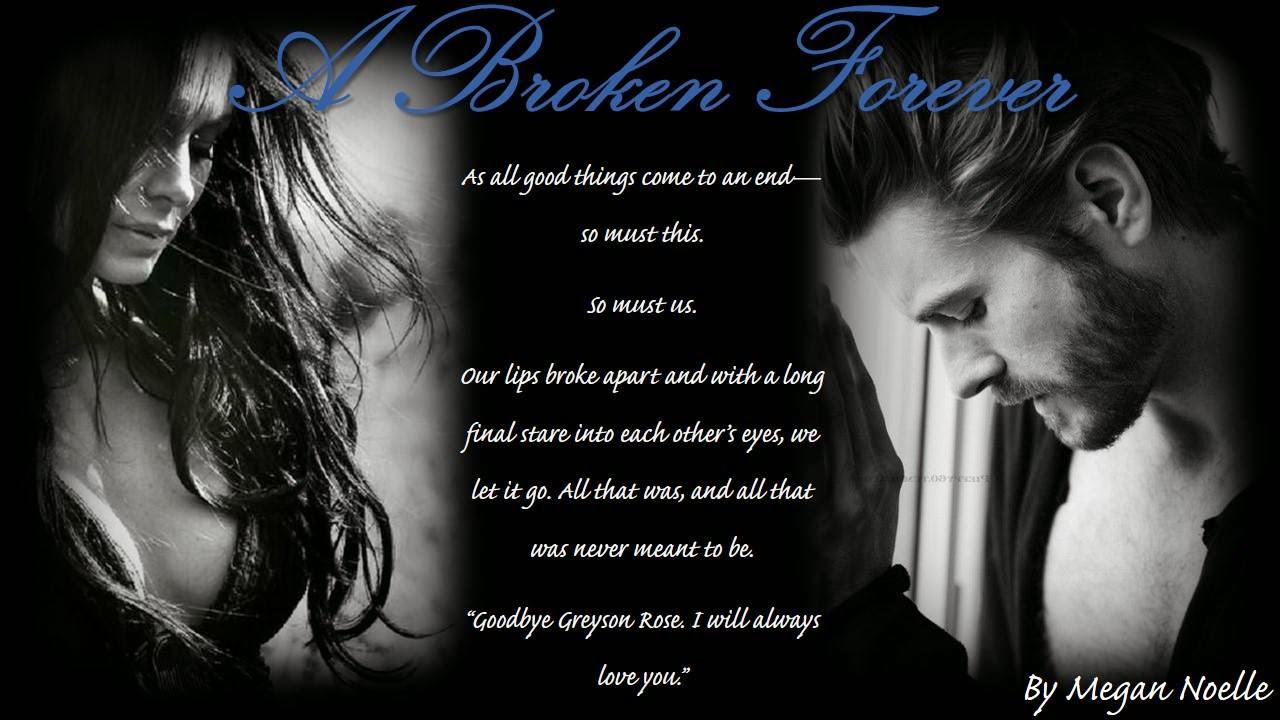 I am Megan Noelle! I have been writing for many years and currently have two books out that are part of a series. My For You series were the first novels I published but I had to stop everything to write Stefan and Grey’s story in, A Broken Forever. I have been writing since I was old enough to hold a pen and finally pursued my dream of becoming a novelist. Writing is my passion and I am all for following one’s passions! One of my other passions is being a mom of my adorable daughter Peyton. When I’m not writing I’m a stay at home mom and a full time student. I’m getting close to finishing my 2-year degree and I am more than ready for a break. There are many things I want to do in life, but if I can write, be with my daughter and my family—I will be happy!

5 *NEW* Random Things You Don’t Know About Me!

One Response to “Blog Tour: Spotlight + Giveaway – A Broken Forever by Megan Noelle”