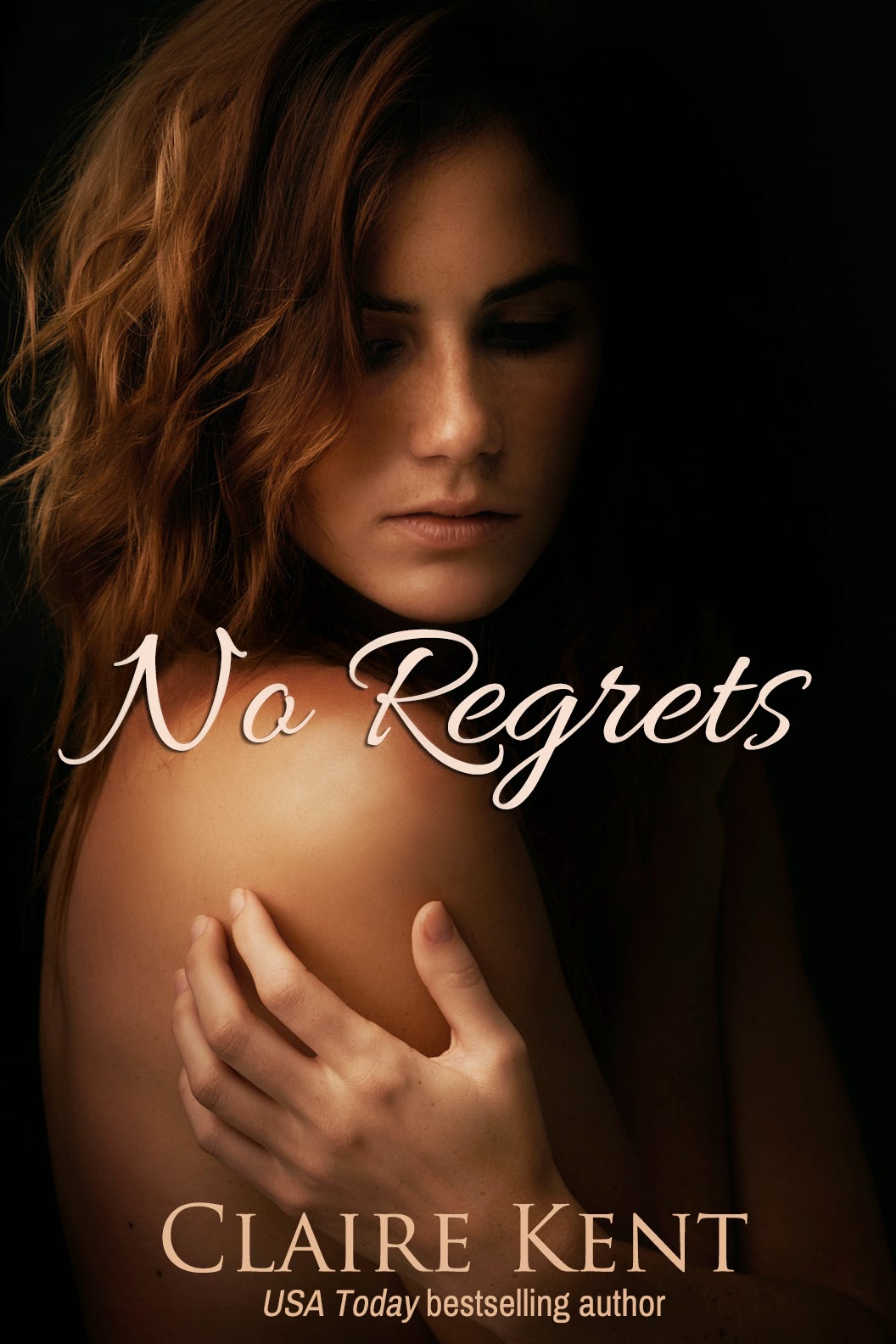 On my last birthday, I made one vow for the year. Live with no regrets. Eleven months have passed, though, and nothing has changed. I still sleep alone, spend my life working, and never move out of my comfort zone.

He’s serious about his no-strings philosophy. As serious as I am about living with no regrets. I can’t help but fall for him, even though I know better. So my biggest regret might be a broken heart.

I couldn’t stay on this park bench forever.

I hadn’t moved yet. I was still staring blindly at the dogs and people on the path when I noticed from the corner of my eye a man slowing down from a run and then jogging toward me.

Glancing over, I expected him to head past me toward the parking lot, but he seemed to be coming directly toward me.

When he got close, I realized it was Dr. Bennett.

He looked different than he had this morning. He wore a t-shirt and gym shorts, both wet with perspiration. His face and short brown hair were wet too. He’d obviously been running hard.


It was a stupid question and a stupid answer, but that’s what people do. It was part of living in a civilized world. You made up nice-sounding lies and you said them to each other, instead of talking about how much the world sucked.


His face was flushed, and he was having trouble catching his breath. Bending at the waist, he rasped, “I better do a lap to cool down. I’ll be right back.”


I had no idea why he’d bother coming back. We didn’t know each other. We had nothing to say to each other. And I wasn’t really in the mood for talking.


He’d killed my dog that morning, but I could hardly hold it against him.


He took a slow jog around the track and ended up back at the bench with a water bottle in his hand. His breathing was less ragged as he sat down beside me.


He didn’t say anything, and I felt a little strange. I didn’t know exactly what he expected from me. I certainly wasn’t going to cry on his shoulder, if that was what he was thinking.


So I just asked a casual question. “You’re done with your shift for the day?”


“Do you always come here to run afterwards?”


“Sometimes.” His vivid blue eyes rested on my face, searching or questioning or something. “It’s on the way home.”


“Have you lived in Lexington long?”


“I grew up here—in Versailles, actually. But I just moved back to the area.”


“Where were you before?”


“Oh.” I blinked, slightly surprised. I’d landed on his age as younger than me but still in his thirties, but he must be quite a bit younger if he was just out of vet school. “So you just got your degree?”


“Yeah.” As if he could see the surprise in my face, he added, “I started late. I didn’t go right after college.”


That made more sense. The conversation, as casual as it was, managed to distract me from thoughts of Polly, so I pursued it. “What were you doing before you went to vet school.”


He didn’t answer immediately, which prompted my curiosity. To take the edge off the silence, I said, “Bank robber? Computer hacker?”


He gave a low chuckle and smiled at me—not broadly, but it still transformed his face until he was almost unbearably attractive, even as sweaty as he was. “Nothing that exciting. I was in Chad.”


“Wow.” My eyes widened in surprise. “What were you doing there?”


“International aid work. I started right after college and did it through most of my twenties. I was mostly in Chad and Sudan.”


“So what made you decide to be a vet instead?”


He gave a strange little shrug and looked away from me. “I couldn’t do it anymore. And animals…are different.”


I studied him, trying to read his expression, trying to interpret the paradoxically empty bitterness on his face. There was obviously more going on with him, but there was no reason to expect him to tell me.


There was no reason I needed to know.


“What do you do?” he asked, obviously trying to change the subject.


We chatted for almost a half-hour, about my job, about how he was settling back into the area, about running—which I used to do, although not much recently.


Eventually, the perspiration had dried on his skin and his clothes, and we’d both faded into reflective silence.


I felt a little better—like I wasn’t on the verge of tears—but the thought of going home still filled my stomach with dread.


He’d been staring off in the distance, and he said without warning, “This morning was the first time I’ve had to do that.”


I glanced at him in surprise, realizing immediately what he was referring to. “Aren’t you supposed to be professional and distanced about the whole thing?”


“I guess. I thought I’d be able to keep the right perspective with animals, but it was harder than I thought. She seemed like a very sweet dog.”


I took a loud, ragged breath as emotion surged up. “She was.”


“Thanks.” I took a few more breaths until I was in control again. “I really don’t want to go home.”


“Do you want to get a drink or something?”


I finally landed on an explanation for his mood. He seemed adrift, kind of lost, not emotional but torn in some way.


I wondered what he’d experienced in Chad. What it had done to him. Why he’d decided against working with people anymore.


Even yesterday, I would have said “no” to his invitation. For the last few months, I hadn’t done much of anything except go to work and take care of Polly. I hadn’t liked to leave her in the evenings.


It had been years since I’d had a drink with a guy I didn’t know, and this particular guy was too young for me anyway.


But it was just a drink. Nothing more. He wasn’t coming on to me. He was just being nice. And it would give me something to do with myself, other than go home to an apartment without Polly.


I felt a little better, talking to him. Like the world wasn’t about to pull me into some sort of black hole.


I remembered my vow, eleven months ago, on the day I’d turned thirty-eight.


I was supposed to be living with no regrets, and so far I hadn’t done a good job.


This would be something I wouldn’t have to regret.

Claire has been writing romance novels since she was twelve years old. She has a PhD in British literature and, when she’s not writing, she teaches English at the university level.

She also writes contemporary romance under the penname Noelle Adams.