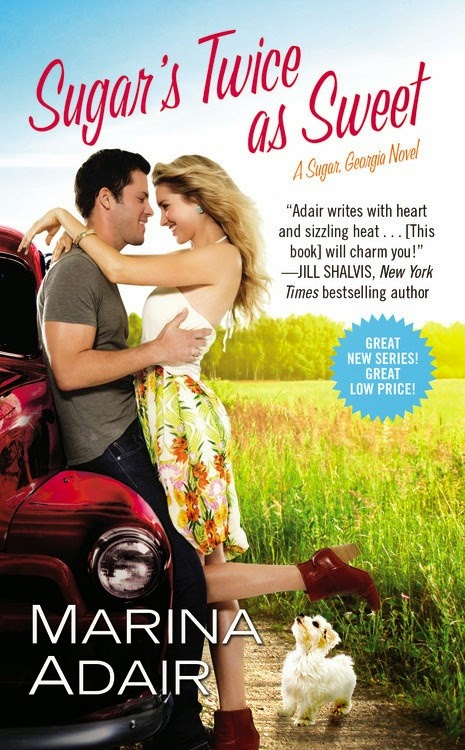 He’s trouble she doesn’t need . . .
Thanks to a cheating fiancé, Josephina Harrington’s perfect life just crashed and burned. Moving in with her overbearing parents is definitely not an option. No, she needs to prove she can make it on her own. And she will-by turning her great-aunt’s old plantation house into a destination getaway. She’s just not expecting her contractor to be so hands-on-and so totally irresistible.
. . . but everything she wants
Bad-boy golf champion Brett McGraw figured his hometown of Sugar, Georgia was the perfect place to lay low and get his life back up to par. The leggy blonde with a pint-sized pup is the kind of sweet ‘n sassy trouble he never saw coming. She doesn’t know a nut from a bolt and before long, he’s renovating her house . . . as she steals his heart. Can he convince Josephina that his womanizing ways are in the past and he’s ready for forever?

A heat passed through her eyes that told him she liked his touching her, liked being with him. Determined to find out just how much she liked his hands on her, he tightened his grip on her hip, shifting closer until they brushed up against each other. He dipped his head, just enough to let her know his intent.


Her breath caught and suddenly their mouths were only a fraction apart. Their gazes held, neither talking, just sharing breath.


“Brett,” she whispered again, her voice a little thick. “We shouldn’t. I just got out of a relationship and you, well, it’s weird that I don’t even know you but I’ve seen your tattoo and…”


Brett smiled. So she had seen the video. Paid close enough attention to notice his tattoo, which meant she was staring in the vicinity of his ass. He didn’t know if that was a good thing or not. But her dilated eyes and shallow breathing were.


It was the damnedest thing, they were barely touching and yet he was reacting as if they were naked and pressed against each other. Maybe this was what he needed, one night to get her out of his system, then he could forget about this crazy attraction and go back to lying low.


He lowered his head and she went up on her toes. Her eyes fluttered shut. He wasn’t sure who started it, but suddenly they were kissing, her arms on his chest, his in her hair. Their lips brushed once, and then some more. Tender little kisses that made his chest tight and his jeans even tighter.


She gave a small purr of approval that was pretty much his undoing. She didn’t grab or demand, instead cuddling into him all soft and vulnerable. So damn vulnerable. With another sexy sigh she pulled back, just enough so that they weren’t kissing but were sharing breath, staring into each other’s eyes. Hers were huge and unguarded, showing him every damn thing she was feeling.


Brett tensed, waiting—hoping like hell—for her to push him away. End this and give him an easy out.


Too bad nothing about her was easy. She wrapped her arms around his middle, pulling him close enough to bury her head in his chest, and her whole body melted into his. That one move changed the game.


He stood there, stock-still, his hands at his side. His brain raced, trying to figure out what she needed from him. Apparently, it was a hug, because when he wrapped his arms around her, she let go a warm sigh that went all the way to his heart. She held on to him as if she were afraid there was somewhere else he’d rather be. Which should have terrified him, because there wasn’t. He could stand there all night and just hold her, listen to this soft little sounds of hers, which turned him on almost as much as her mouth.


A sure sign that was he was in trouble.


A lot of trouble. #5. When Alpha Males Collide:
Brett quickly learns that the most important male in Joie’s life is her kiss-a-boo dog. And if he is to have any kind of shot with Joie, then he has to have a come to Jesus meeting with her travel-size white ball of fluff with a bad attitude.  Too bad for Brett, Boo doesn’t take well to sharing—especially when it comes to his mistress.
#4. The “Welcome to the Neighborhood” Visit Gone Wrong:
Joie is delighted to find the gray haired welcome committee on her porch—all holding a covered dish in offering. Wanting to show off her renovation ideas for the inn, and make her first friends in her new town, she invites them in. Only these grannies aren’t looking for a glass of iced tea, they are there to start trouble, and quite possibly the biggest feud Sugar has seen in over a decade.
#3. Brett Fantasy Reveal:
This moment was magical for me because for the first time in the story, Brett really looks past the pretty face and mile-long legs, and sees the beautifully sweet and whimsical woman Joie is at her core. She is covered in pretzel crumbs, melted chocolate, and wearing a pair of fairy wings, and he can’t take his eyes off of her.

Leaning closer, he ran a finger down her wings and waggled his brows. “Did you know I have a thing for fairies?” She laughed. And it felt good. “Hand to God. It has something to do with those skimpy little petal dresses.”

#2. The Rejection Heard Around the South:
In an effort to be a good southern gentleman, and get Joie’s number, Brett offers her a ride home since her car is broken down. Joie not only rejects a ride in his big white truck, she flat out rejects him. And her reason leaves the poor guy sputtering:


“My aunt told me never to trust a balding man.”


She spared him a very brief and very annoyed glance, jerking her chin toward his Stetson. “Men wear it to hide their lack of hair.”

My absolute favorite moment in SUGAR’S TWICE AS SWEET is when Joie and Brett meet for the first time. I have to admit that I am a sucker for the first meet. In fact, it is usually my favorite part of the book to read and to write. And there is something about Brett and Joie’s first meeting that I love. Here’s a sneak peek:

Brett held out his hand. “Name’s Brett McGraw.” When she just looked at his outstretched offering as though it was a snake about to bite, he stuffed it in his pocket and leaned back against his rig, which was conveniently parked next to a highway sign boasting his name. Crossing his ankles, he gifted her with his cover-of-Sports Illustrated grin—and waited.


It didn’t take long. Her eyes went wide with recognition. Two cute pink spots appeared on her cheeks and she gasped. In just about three seconds, she was going to be batting those lashes in his direction, telling him how sorry she was for treating him like he was some kind of perv, and asking—no, begging—him for a ride. And not just in his truck. At least that’s what his lower half was hoping. His upper half was telling him to get back in the cab and get the hell out of there.


“Ohmigod.” Her hand, the one holding the leash, came up to flutter in front of her stunned, dangling jaw. In the process, she yanked the little rat, which had its leg poised to piss all over his truck, out of firing distance. “Oh. My. God.”


And here it comes… “You’re that tractor salesman?”


“Excuse me?” Brett blinked. Then choked a little, remembering the ad he had done a few years back for John Deere.


Holy shit. She had no idea who he was. Meaning she had zero expectations. The notion made the hollow pit in Brett’s chest, the one that he’d been carrying around for over a decade, fade a little.

Marina Adair is a lifelong fan of romance novels. Along with the Sugar series, she is also the author of the St. Helena Vineyard series. She currently lives in a hundred-year-old log cabin, nestled in the majestic redwoods of the Santa Cruz Mountains, with her husband and daughter.

As a writer, Marina is devoted to giving her readers contemporary romance where the towns are small, the personalities large, and the romance explosive. She also loves to interact with readers and you can catch her on Twitter at @MarinaEAdair or visit her at www.MarinaAdair.com.