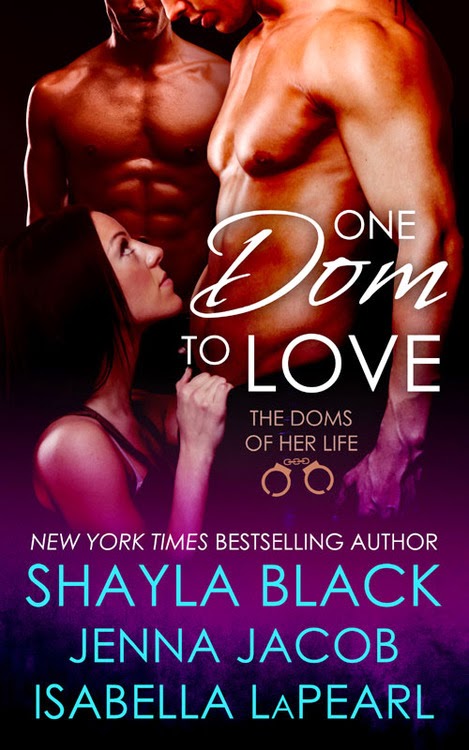 Raine Kendall has been in love with her boss, Macen Hammerman, for years. Determined to make the man notice that she’s a grown woman with desires and needs, she pours out her heart and offers her body to him—only to be crushingly rejected. But when his friend, very single, very sexy Liam O’Neill watches the other Dom refuse to act on his obvious feelings for Raine, he resolves to step in and do whatever it takes to help Hammer find happiness again, even rousing his friend’s possessive instincts by making the girl a proposition too tempting to refuse. But he never imagines that he’ll end up falling for her himself.
Hammer has buried his lust for Raine for years. After rescuing the budding runaway from an alley behind his exclusive BDSM Dungeon, he has come to covet the pretty submissive. But tragedy has taught him that he can never be what she needs. So he watches over her while struggling to keep his distance. Liam’s crafty plan blindsides Hammer, especially when he sees how determined his friend is to possess Raine for his own. Hammer isn’t ready to give the lovely submissive over to any other Dom, but can he heal from his past and fight for her? Or will he lose Raine if she truly gives herself—heart, body, and soul—to Liam? 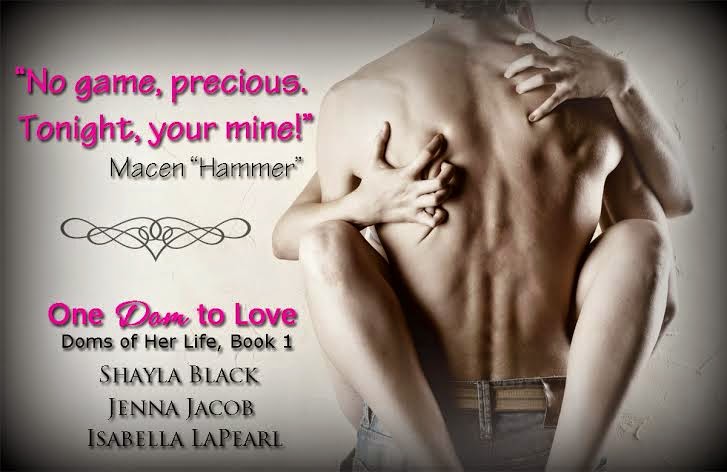 Liam curled a finger under her chin, raising her face to his once more, and had to steel himself against another shocking jolt of lust. “You have, haven’t you?”


“I want to be what Hammer needs, but I don’t know for certain that I have the self-discipline to kneel and hold my tongue. I’ve never had the opportunity to try.” She swallowed, honesty paining her expression. “But I still don’t understand what’s in it for you.”


“You’re a beauty, for sure. Touching you will be no hardship, lass.” Right now, he hated how true that was. “From what I’ve seen, you can be a mouthy wench who would benefit from a red ass now and again.” He forced himself to wink and grin.
After a split second of waiting for her reaction, her eyes flashed wide. Then she bestowed on him the sweetest sound he’d heard in months, her unbridled laughter.


“There’s a girl.” His smile became real. “Let me help you. I see your need. I enjoy molding and teaching.” He cupped her cheek. “You should be cherished and nurtured, and I’d be honored to give that to you, Raine. Are you game?”


Indecision washed over her face. Liam found himself holding his breath, praying she’d say yes. Hammer needed her…and Liam staggered with his own need to touch her—at least once. It wasn’t noble, and he wasn’t proud of it. But she was so damn fuckable, and he was just a man. This lust would pass.


“You don’t seem like the sort to do something halfway. You’ll want to lay my soul bare, won’t you? Make me show you all the broken parts?” She crossed her arms over her chest, nudging him back. “If I show you, are you going to run like Hammer, too?”


He uncrossed her arms and leaned closer. Now he could hear her softly indrawn breaths, see her fine trembling. Desire surged. Liam couldn’t stop himself; he curled a hand around her shoulder, eliminating her personal space, and brushed his palm down to fasten on the curve of her waist. “I never run from a challenge I’ve set my mind on. Yes, I intend to split your soul wide open like a ripe peach, study you until I know well every piece of the intriguing puzzle you are, down to the last detail, lovely. Then, I mean to put you back together with my touch and make it worth your while.”


“Best to set the expectation up front.”


She let out a deep breath and fidgeted, trying to drop her gaze once more. He didn’t allow it, lifting her chin again and bending until their eyes met. “Answer me, Raine. Yes or no?”


“I-I’ve wanted a good Dom. I thought it would be Hammer, but…” She closed her eyes and frowned.


Liam bit his tongue. She wanted to feel valued above all else—needed it. He tucked that knowledge in the back of his head and let her continue. “But?”


“I can’t be less than honest with you. You know where my heart is. As much as I would love to explore everything you could teach me—really, I would—I don’t know if I could give you the devotion you deserve. And I doubt Hammer would ever give his consent, even for you. It might be better for us all if I just left.”


He trapped her against the counter in an instant, pressing his body to hers. Her lips parted in question. Her wide gaze jumped to his, then she focused on his mouth. An electric jolt rattled down his spine. Damn, she was potent.


Yanking her soft curves flush against the hard ridges of his body, he ached to dig his fingers into her hair, pull her lips under his, and eat away at her mouth until she moaned. Liam forced himself to stop. This wasn’t about him, but Hammer. And Raine.


Dragging in a rough breath, he palmed her nape tenderly with one hand, fingers teasing the perfect pink shell of her ear with the other before trailing down to caress her throat. Finally, he settled his hand on her chest, just above her plump breast. Her breathing changed to soft pants. He could feel her heart beating madly under his palm. She wasn’t immune to him. An intoxicating rush of power filled him.


Then he took her wrists in his free hand and brought her arms up slowly, bracing them against the cabinets above, her breath caught. A triumph he didn’t welcome spiked inside him. Still, he bent to Raine, giving her ample time to push him away. She didn’t. Her tongue swept nervously across her upper lip. His cock jerked. Then he couldn’t stop himself from seizing her mouth with his own, capturing her gasp.


Soft. So fucking soft. And sweet. Bloody hell… Pleasure fired through his blood like a potent drug as he delved inside. She melted beneath him.


Curling his tongue around hers, he feasted on her addicting flavor, hungry to memorize it. One kiss melted into the next, and he devoured her, inhaling her into his lungs. She turned to liquid desire against him, wild and tumultuous. One leg slid surreptitiously around his, capturing his calf, pulling him in tighter against her small frame, splitting her thighs open. He should pass up that perfect invitation, but he didn’t. Instead, he ground himself against her pussy, leaving her no doubt that he desired her. Despite Raine’s little skirt, her flesh burned him. A low groan ripped from his throat. He didn’t need air or space or tomorrow, just more of her. Right fucking now. 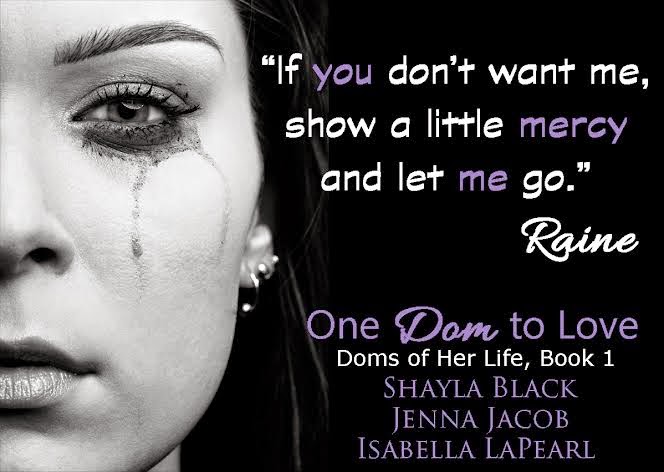 ★ Other Books in the Doms of Her Life Series ★ 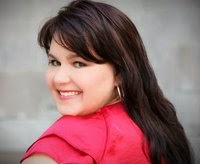 You know what they say about curiosity and the cat…but if you still want to know, read below. 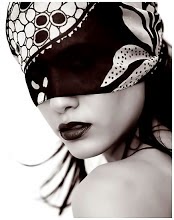 Website • Facebook • Twitter • Goodreads
My name is Isabella and I am a new Author of Erotic Fiction. I have recently published two short stories, one a stand-alone “Connexions” and the other is the first book in a series called The Quickening and is entitled “Scandalous.” The next two in the series, will be coming out in 2013 and are called “Momentum” and “Geminus” respectively.
December 4th 2012 was a WOW day of biblical proportions for me personally. My first novel was published, entitled “One Dom to Love” co-written by Best Selling New York Times Author, Shayla Black and by Author Jenna Jacob. I can’t even begin to express how privileged and thrilled I was to work with both these wonderful, incredible women, and how proud I am to call them friends. “One Dom to Love” is the first book in The Doms of her Life series and for those chomping at the bit already after finishing this book, you’ll be delighted to know that Book 2 is currently being written.