Title: I’ve Got My Duke to Keep Me Warm (The Lords of Worth, #1)
Author: Kelly Bowen
Genre: Historical Romance
Release Date: December 16, 2014 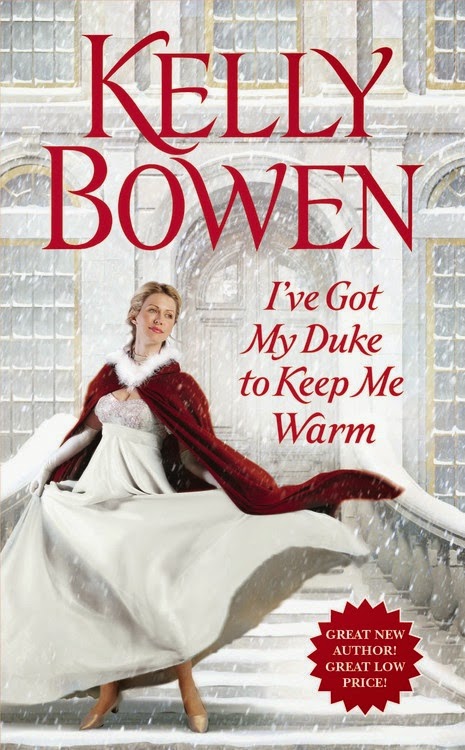 Where Secrets Smolder…
Calm. Cool. Collected. Gisele Whitby has perfected the art of illusion—her survival, after all, has depended upon it. Years ago, to escape an abusive husband, Gisele “disappeared.” Now she must risk revealing her new identity to save another innocent girl from the same fate. But she needs a daring man for her scheme, and the rogue in question shows a remarkable talent . . . for shattering Gisele’s carefully constructed façade and igniting her deepest desires.
…Passion Ignites.
This isn’t the first time Jamie Montcrief has awakened naked and confused from a night of drinking. It is, however, the first time a stunningly beautiful woman offers him payment afterward. Gisele has a business proposition for him, a mission involving cunning thievery and a brazen rescue. How can he say no to a plot this dangerous . . . and a woman this delectable?

The ice queen shrugged.  “You’ll have to trust me.”
Jamie closed his eyes, fighting for patience.  “Will I need to steal something?”
“Unlikely.”
“Kill someone?”
“Hopefully not.”
“Blow something up?”
“You’re familiar with explosives?”
His eyes popped open at the undisguised interest in her last question.   What the hell kind of woman used the word explosives the way most used the word marmalade?  Or teapot?

#2) The first kiss -always a highlight in a love story!  In this case, circumstance contrived to make it happen.

Gisele hit Jamie’s chest with a thump, turning desperately away from both the fashionable woman stalking towards them and the bevy of maids and footmen clutching bags and lapdogs in her wake. Sebastien had dropped to his knee, head turned away, adjusting a boot that didn’t need adjusting. Jamie glanced down at Gisele who was looking up at him with wide, panicked eyes. They were trapped between the side of the inn and the crush of people behind them.  Two of the tiny lapdogs started yapping hysterically, and as Jamie gaped alternatively at the foul canines and the bellowing woman, he suddenly felt Gisele’s hands curl into the front of his coat and jerk him around with a shocking force.

#3) This was one of my favorite scenes – emotions are running high and the heroine is furious she is being pushed into the truth.  But it also marks the moment when genuine honesty begins to establish itself between the hero and the heroine.

“I did that to save a woman who would have been dead within a year had I not!”

“Then I ask why?  While it may have been noble, why go to such extremes for a woman you’ve never even met?  I have to assume, Gisele, that what you did—what you do—is to atone for something in your past.  Something terrible.  What did you do in London, Gisele?”

“I got married,” she said savagely, suddenly furious he had forced her into this before she was ready.

#4) The Dowager Duchess of Worth is one of my secondary characters who makes an appearance in all three books in the Lords of Worth series.  Her supposed descent into eccentricity allowed me to create wholly absurd situations which I found quite amusing!


“Your Grace?”  He was startled by the abrupt change in topic.


“The chickens.”  She gestured to the hen in the cage and the room around her in general.


Jamie stepped closer to the fire.  “One might assume it is because you enjoy the company of poultry.”


The dowager duchess smiled then, and Jamie caught a glimpse of the beauty she must have been as a girl.  “One might assume that, yes.  But I am interested to hear what it is you assume, Mr. Montcrief.”

“You’ll never be a duchess, you realize.”
Gisele sniffled.  “Thank God.  Every time I put on an expensive ball gown something seems to explode.”

★ Upcoming books in The Lords of Worth Series ★

Kelly Bowen grew up in Manitoba, Canada. She worked her way through her teenage years as a back country trail guide and ranch hand and spent a year working on a cattle station in Australia. She attended the University of Manitoba and earned a Master of Science degree in veterinary physiology and endocrinology.

But it was Kelly’s infatuation with history and a weakness for a good love story that led her down the path of historical romance. When she is not writing, she seizes every opportunity to explore ruins and battlefields.

Currently, Kelly lives in Winnipeg with her husband and two boys, all of whom are wonderfully patient with the writing process. Except, that is, when they need a goalie for street hockey.

3 Responses to “Blog Tour: Top 5 List + Giveaway – I’ve Got My Duke to Keep Me Warm by Kelly Bowen”