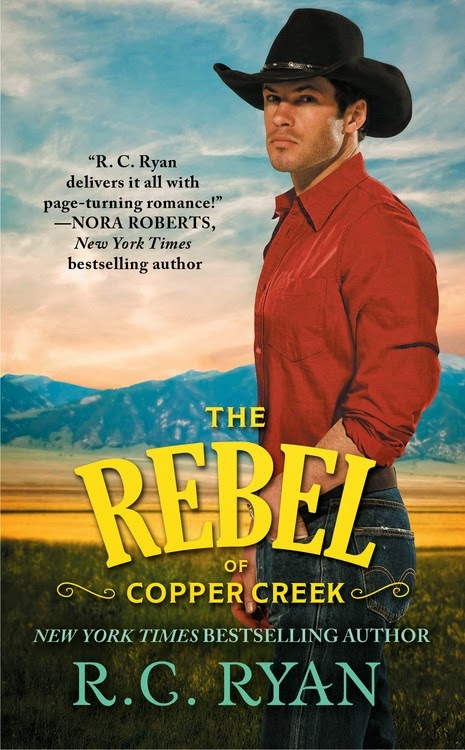 A love worth fighting for . . .
The last thing widow Juliet Grayson needs is a man in her life. Between caring for her two young sons and maintaining her husband’s ranch, her hands are more than full. Then she meets Griff Warren. With his quiet strength and his easy way with her boys, she’s tempted to trust him. But if there’s anything she’s learned, it’s that love only leads to heartbreak.
Former Marine Griff Warren never thought he’d settle down. Rebellious and proud, he’s always been on his own . . . until the father he never knew he had died, leaving him with land that is his legacy and brothers to share the load. He doesn’t need more than that. But Juliet touches something deep inside him-and he wants nothing more than to protect her and her sons. Now if only he can convince her to take a second chance at true love.

★ The Rebel of Copper Creek ~ Excerpt ★

She opened a second door to reveal a bathroom fit for a queen, with a tub and shower big enough for an army, a lovely oval sink and mirror, and all of it done in shades of white marble.


She turned to him with a look of alarm. “Oh, Griff. I don’t belong here.”


He merely smiled. “Neither do I. But I won’t tell if you don’t.” His smile grew. “I say we just kick back and enjoy all this until they discover we’re frauds.”


She tried to laugh, but it came out in a sigh.


Before she could say more he touched a finger to her lips. Just a touch, but they both looked stunned at his boldness.


He lowered his hand and took a step back. “I’d better say goodnight and get out of here.”


His smile was quick and charming. “I’m feeling overwhelmed myself. But it’s not the room, it’s the woman in it.”


His smile disappeared. “It’s no joke. And if I don’t leave you right now, I just might not make it out of here.”


He got as far as the door before turning to look at her. That was his downfall. In quick strides he crossed the room and grabbed her in a fierce embrace.


“I almost made it.” The words were whispered against her temple as he began brushing hot, wet kisses down the side of her face until she turned her head slightly and his lips found hers. “I know you told me you don’t like this.” His voice was a rough growl of desperation.


“That’s what I said. But right this minute I can’t tell you that, Griff.” She clung to him. “I need you hold me, just for a minute.”


“If I stay for a minute, it could turn into hours. I may not be able to leave at all. In fact, it’s already too late. I know what touching you does to me.”


And then he took the kiss deep, nearly devouring her.


Her body was crushed against him, her heartbeat wildly matching his. The feel of her ragged breath, her pounding pulse, added more fuel to the fire that raged through him.
“Wait, Griff. I need a minute…”


Her words barely penetrated the fog that seemed to have taken over his control.


Instead of doing as she asked, he backed her across the room until they were stopped by the press of the wall against her back. They barely noticed the bump of their bodies as they continued the kiss until they were nearly crawling inside each other’s skin.


He was so hot he could barely catch a breath. Lifting his head, he breathed deeply before lowering his face to hers. “I could stay the night. I could…”


“I can’t think. My brain…” He sucked in air, hoping to clear his mind.


As he started to turn away she lifted herself on tip toe to brush his mouth with hers. “I don’t want you to, but I know I need to send you away.”


His hands closed around her shoulders. “Was that no? Or go?”


She looked up at the same moment he looked down. They bumped noses, then both burst into laughter.


They laughed so hard they clung together, shaking and laughing.


He pressed his forehead to hers and managed another shaky breath. “Okay. At least I know we’re both crazy.” He held her a little away and stared deeply into her eyes before giving a groan. “I’m going now. Just…” He backed away. “…don’t touch me or I won’t make it.”


She stayed where she was, watching as he backed across the room. Straightening his shoulders he turned and opened the door. He stepped out and pulled it firmly shut behind him.

★ Other Books in the Copper Creek Cowboys Series ★

New York Times bestselling author R.C. Ryan has written more than ninety novels, both contemporary and historical. Quite an accomplishment for someone who, after her fifth child started school, gave herself the gift of an hour a day to follow her dream to become a writer. In a career spanning more than twenty years, Ms. Ryan has given dozens of radio, television, and print interviews across the country and Canada, and has been quoted in such diverse publications as the Wall Street Journal and Cosmopolitan. She has also appeared on CNN News, and Good Morning America. R.C. Ryan is a pseudonym of New York Times bestselling author Ruth Ryan Langan.

One Response to “Blog Tour: Book Spotlight + Giveaway – The Rebel of Copper Creek by R.C. Ryan”