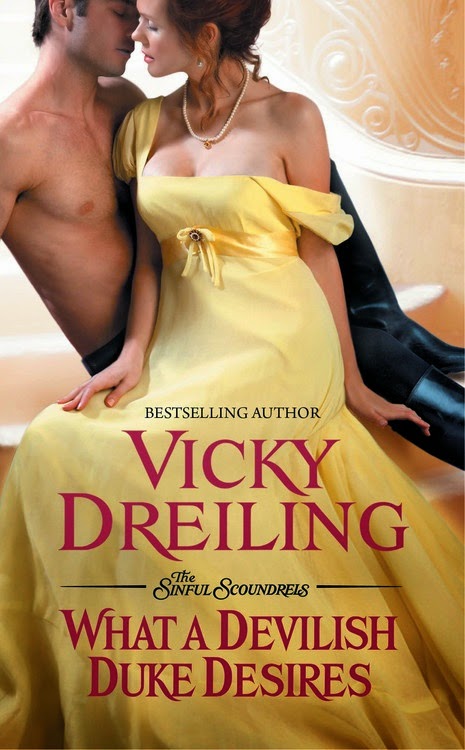 WILL A FEW FLIRTATIOUS STEPS
Harry Norcliffe never wanted to inherit his beloved uncle’s title. The rigidity of the ton, the incessant reminders from his marriage-minded mama that he must settle down with a highborn lady and produce an heir and a spare: it’s all such a dreadful bore. So when his mother asks him to take part in a dancing competition, he patently refuses. The last thing he needs is another chore . . . until a beautiful, brilliant, delightfully tempting maid makes him rethink his position.
LEAD TO A SCANDALOUS SEDUCTION?
Most women would be over the moon to be pursued by a wickedly handsome-not to mention wealthy-duke like Norcliffe. But Lucy will not be any man’s trophy. She could use a friend, though, and what begins innocently soon ignites into desire. As Lucy tries to resist Harry’s scorching kisses, he makes an utterly irresistible offer. Enter the dance contest with him, and win a prize that could change her life forever . . . if falling in love doesn’t change it first.

1). The following scene where Harry runs to rescue a woman from a thief is one of my favorite early scenes:

“If you will allow it, I will escort you for your safety,” he said smiling. “Surely you will not object to protection.”


Her eyes narrowed. “You’ve done your good deed for the evening, Sir Galahad. She reached inside her basket and brandished a wicked-looking knife. My trusty blade is protection enough.”


Holy hell. It was a large blade, but she held it too low. He also noticed her arm trembled. She clearly had no idea how to use the blade.


She looked him over and shook her head. “Perhaps I should escort you for your safety.”


She’d obviously taken stock of his clothing and deduced he was wealthy. “You heard the coins jingling while I ran.”


She regarded him with a world of knowledge in her eyes. “Tonight, Sir Galahad, you are far more vulnerable than I am.”

2). I love the scene where Harry and Lucy happen to meet at Green Park.

He sniffed. “I smell an orange.”


The moment suspended, and then her face heated. She’d been so taken with him she’d forgotten to answer.


The sensitive skin of her palm tingled a little at the slight brush of his fingers.


Still a bit off balance, she looked at the peel in wonder. “You made a rose of it.”

(P.S. I found a YouTube video that shows how to make a rose out of an orange peel.)

He pulled her flush against him, and she could feel his hard body. She was breathing faster and everything inside of her was on fire for him. God help her, she wanted his hands all over her.


He broke the kiss, and she was aware that his breathing had quickened as well.


When he released her, he said, “Good night, sweet Lucy.”


Her limbs trembled a little as he strode out into the night, leaving her to wonder if he knew it was her first kiss.

4). In this scene, Harry is surprised to find Lucy in his mother’s drawing room.

Harry felt as if he were having a strange dream, one where he stepped out on a stage dressed only in his drawers. What the devil was Lucy doing here?


“We were all in an uproar, but you arrived in the nick of time,” Mina said.


He had no idea what Mina was talking about, but it did not sound promising. “I regret that I’m unable to stay.”


“Nonsense,” Mrs. Norcliffe said. “We were shy one gentleman and fortune blessed us with your presence.”


“Fortune has already blessed me,” Harry said. “Really, I have an appointment.” He didn’t mention the appointment involved walking Bandit.

5). In this scene, we see clearly the obstacles that Harry and Lucy face.


“At what cost, Harry? If you were foolish enough to marry someone beneath you, it would affect every aspect of your life, including your political career and your acquaintances. No one in the ton would accept such a marriage. I won’t be the instrument of unhappiness for your family.

★ Books in the The Sinful Scoundrels Series ★

He took off his coat and went to tend the fire. His wide shoulders needed no padding. When he rose and dusted his hands, she noted his superior height once again. In his waistcoat and shirtsleeves, she could discern the way his waist tapered.


He joined her on the sofa and laid his arm across the top of it. “Tired?” he asked.


“No.” She was too aware of him. In the shadowy room, she could not see his bright blue eyes, but the soft sound of his breathing mingled with hers. The tension between them crackled all around her. A long moment suspended. Her senses were heightened, and her breasts felt heavier for some odd reason. She discerned the scent of wintergreen soap and something else—something masculine and irresistible.


Something unique to him.


He leaned closer, and she could feel the whisper of his breath on her lips. “From the first moment we met, I could not get you out of my head.”


His words made her feel giddy, but she held back, because she was still a little wary. “I am undoubtedly the first woman to threaten you with a knife.


He grinned. “Indeed you are. Now that you are unarmed, perhaps we could be friends.”


“We will shake on it,” she said, offering her hand.


He took her hand and turned her wrist, palm up. He looked up at her beneath his dark lashes, and then he kissed the tender underside of her wrist. When he touched his tongue to the pulse point, her breath shuddered out of her. She thought she might melt from the heat in his seductive gaze.


“I’d better go,” he said. There was a knowing look in his eyes, as if he was aware of exactly how he’d affected her.


When she inhaled on a shaky breath, he helped her to rise. She walked with him to the door as if she were enveloped in a fog.


He halted and gazed into her eyes. Then he drew her in his arms and kissed her gently on the lips. His mouth moved over hers and his hand slipped down the curve of her spine. Heat and longing surged inside her. He wrapped his arms around her, and she could feel the hard, unyielding muscles of his arms, chest, and thighs as he pressed her against him.


“Forgive me in advance,” he said.


“For what?” she whispered.


He kissed her gently once more, and then he drew his tongue along the seam of her mouth. Her lips parted and then his tongue was in her mouth, tasting her while his hands slid down her spine and to her bottom. He pulled her flush against him, and she could feel his hard body. She was breathing faster and everything inside of her was on fire for him. God help her, she wanted his hands all over her.


He broke the kiss, and she was aware that his breathing had quickened as well.


When he released her, he said, “Good night, sweet Lucy.”


Her limbs trembled a little as he strode out into the night, leaving her to wonder if he knew it was her first kiss. 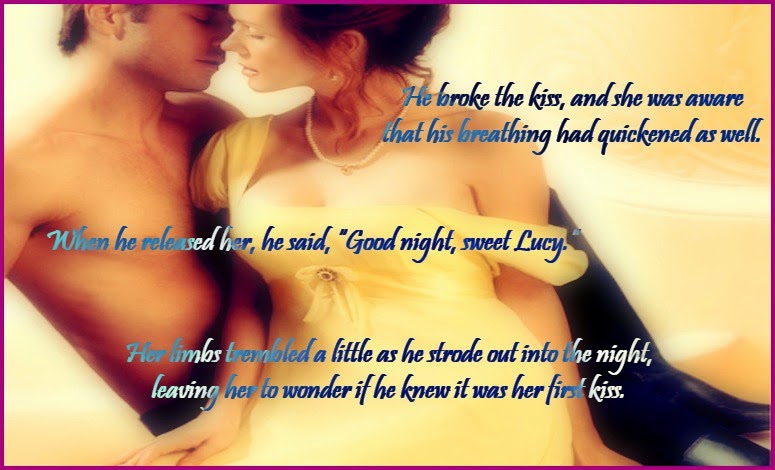 Vicky Dreiling is a confirmed historical romance junkie and Anglophile. Frequent business trips to the United Kingdom allowed her to indulge her passion for all things Regency England. Bath, Stonehenge, and Spencer House are among her favorite places. She is, however, truly sorry for accidentally setting off a security alarm in Windsor Castle. That unfortunate incident led her British colleagues to nickname her Trouble. When she’s not writing, Vicky enjoys reading, films, concerts, and, most of all, long lunches with friends. A native Texan, she holds degrees in English literature and marketing.