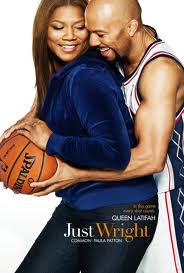 Leslie Wright is a straight-shooting physical therapist who gets the gig
of a lifetime working with NBA All-Star Scott McKnight. All is going
well until Leslie finds herself falling for Scott, forcing her to choose
between the gig and the tug-of-war inside her heart. Oblivious to her
romantic overtures, McKnight is instead drawn to the affections of
Leslie’s childhood friend Morgan, who has her sights set on being an NBA
trophy wife. Is Leslie destined to play the role of “best friend”
forever or will Scott finally see that what he always wanted is right in
front of him?

My Synopsis:
Queen Latifah and Common star in this cute romantic comedy.  Queen Latifah plays Leslie Wright, a physical therapist who is everyone’s best friend including the men she attempts to date.  The film opens with Leslie meeting a blind date for dinner.  The date seems to be going beautifully.  Even though they seem to be having a good time Leslie gets the “it’s not you it’s me” speech at the end of the date.  Leslie repeats the speech word for word back to her date since this isn’t the first time she has gotten this speech.  Leslie is cool.  She’s your girl next door and a tomboy.  She loves basketball and the New Jersey Nets are her favorite team. She drives around in this old beat up car that has a special “dimple” on the side.  Currently her childhood friend Morgan played by Paula Patton is staying at her place.  Morgan is beautiful. She is as girly girl as you can get.  She strives to be an NBA trophy wife and is pretty much freeloading off of Leslie.  These two friends are as different as can be.

Scott McKnight played by Common is the face of the New Jersey Nets.  He loves his team and loves the game. After one of his games he and Leslie run into each other at a gas station.  Scott is not familiar with where his gas tank is and Leslie seeing one of her favorite player helps him out.  They get to talking and he invites her to his birthday party the next night.   Leslie brings Morgan with her to the party and of course Morgan being the beauty she is catches Scott’s eyes.  A world wind romance ensues between Scott and Morgan and they get engaged.  They aren’t engaged long before Scott suffers a possible career ending injury.  Morgan sticks with Scott and asks Leslie to assist with Scott’s physical therapy.  Morgan soon realizes that she might not be the trophy wife and walks away leaving Leslie to pick up the pieces of Scott’s broken heart.  As Leslie helps Scott they form a friendship that leads to more.  But before they’re relationship takes off Morgan shows back up.  Who will Scott pick?

My Thoughts:
I really enjoyed this movie.  Queen Latifah and Common do a wonderful job portraying their characters.  The character of Leslie was so adorable.  If I had been Scott McKnight I would have fallen for her too.  She was spunky, independent, confident, sweet, caring, and funny. Leslie was a very relate-able character.  The one you want to root for and hope she gets the guy in the end.  Scott was lovable and sweet.  He’s surrounded by a loving mother and friends who keep him grounded.  He loves the game and lives for it.  This was definitely a romantic movie.  The game of basketball was woven through the storyline but it wasn’t all this movie was about.  It’s about two people coming together and finding something good together.  I loved seeing the interaction between these two.  You saw the friendship and then you could see the attraction happening.  The movie kept me entertained and flowed very well.  There wasn’t a time where I wanted the movie to hurry up and end.  I liked how everything was handled when Morgan came back into Scott’s life.

There were a lot of cute moments that had me sighing.  If you are looking for an entertaining sweet romantic comedy that you and your significant other could enjoy I’d suggest this movie.  It has basketball for him and a sweet love story for her.