Welcome to the second day of author Monica McCarty week.  Now I want to introduce you to the siblings of the Clan Campbell.  This was Monica’s 2nd trilogy that was also released back to back in 2009.  The hero of the first book and the heroine of the second book in this trilogy appeared in the previous trilogy about the McLeod Clan.  The boys from the McLeod Clan make a very brief appearance in the first book in the Campbell trilogy.  So both trilogies are very loosely related.   This trilogy also takes place in the early 1600’s a bit after the MacLeod trilogy. The lead characters in this trilogy are also loosely based on historical characters of that time period.  At the end of each book Monica gives a wonderful run down of who she based them on.  Really interesting stuff.

Again with this trilogy Monica has some great pictures of areas mentioned in these books.  You can’t help but feel like you are there once you take a look at the pictures and than read the books.  Click here to see the special features on her site for this trilogy.  Lots of wonderful extra information kind of a behind the scenes look at the making of this trilogy.

So I now introduce you to the heroes and heroine of the Campbell trilogy: 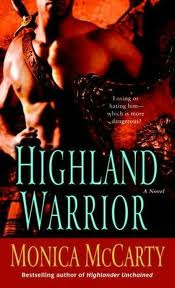 Hero: Jamie Campbell (aka “The Campbell Henchman”, “The Highland Enforcer” and “The Scourge of Highlands”) not flattery names
Heroine: Caitrina Lamont

Book 1 of the Campbell Trilogy
The ruthless enforcer of Scotland’s most powerful clan, Jamie Campbell is
the most feared man in the Highlands. Raw physical strength coupled with cunning
political acumen make him a powerful force with whom few men will dare to reckon.
Determined to see the Highlands tamed of its lawlessness and unrest, Jamie’s
objectives are clear: under the guise of seeking the Chief of Lamont’s daughter’s
hand in marriage, discover whether the Lamonts are harboring any outlawed MacGregors.
But guise turns to desire when he meets the beautiful spitfire who rules the household
with a dainty iron fist. The fierce Highlander never expects that the woman he
wants above all others will test his duty and loyalty to his clan to the breaking
point.
Cosseted and adored by her family, Caitrina Lamont has no intention
of abandoning her beloved father and doting four older brothers for a husband—especially
a Campbell. But Jamie Campbell is nothing like the parade of suitors that Caitrina’s
father usually traipses across their hall. His raw masculinity threatens her in
a way no man ever had before. But when Caitrina’s idyllic world is shattered,
could the man she blames for her tragedy become her only hope for the future?
Click here to read an excerpt of this book.
******************************************* 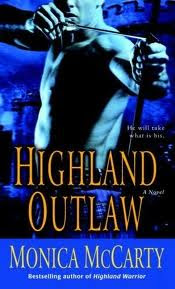 Hero: Patrick MacGregor (aka my boyfriend)
Heroine: Elizabeth Campbell (aka Lizzie and Jamie’s baby sister)
Book 2 of the Campbell Trilogy
Patrick MacGregor is a hunted man living on the edge. With his
land stolen and clan outlawed, Patrick and his MacGregor clansmen have been forced
into hiding—blame for which Patrick puts squarely on the shoulders of the
hated Campbells. Patrick will stop at nothing to save his clan from destruction,
and marriage to Elizabeth Campbell, whose quiet beauty he’d admired from
afar, just might be the answer. Arranging an attack seems to be the perfect means
to win the trust of the protected lass, but soon Patrick realizes that it isn’t
just his life at stake if she discovers the truth of his identity, but something
he’d thought lost long ago—his heart.
Elizabeth Campbell has never done anything reckless in her life.
Shy and dutiful, Lizzie has always tried to do the right thing—even suffering
through the humiliation of two broken engagements without complaint. But behind
the serious façade is a passionate woman fighting to get out. So when a
handsome mysterious warrior rescues her from an attack, Lizzie boldly asks him
to stay. Seduced by his kiss and mesmerized by the edge of danger that surrounds
him, Lizzie succumbs to the promise beckoning from behind his shadowed gaze, believing
she’s found the perfect man. But soon Lizzie wonders whether in risking
her heart, she’s lost everything.
Click here to read an excerpt of this book.
******************************************* 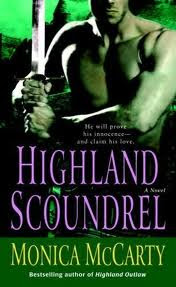 Hero: Duncan Campbell (bastard half brother of Jamie and Elizabeth)
Heroine: Jeannie Gordon
Book 3 of the Campbell Trilogy
Duncan Campbell is a natural born leader, possessing all the
attributes for a Highland chieftain except for one: legitimacy. Forced from the
Highlands for a crime he didn’t commit, Duncan has earned a reputation as
the fiercest, most skilled mercenary on the continent. Vowing to restore his name
and clear the cloud of treason hanging over his head, Duncan returns to the Highlands
to find the one person who might hold the key to his freedom: the woman he’d
once loved who’d betrayed him. But when he surprises her swimming in a loch,
he finds himself facing the bad end of a pistol.
Told she was impulsive her whole life like her mother who’d destroyed their
family when she’d run off with an Englishman over twenty years ago, Jeannie
Grant had never believed it—until she met Duncan Campbell. The
bastard born son of a chieftain was not a suitable husband for the daughter of
a powerful Highland chief, but Duncan made Jeannie willing to risk everything.
She gave him her innocence and he failed her, forcing Jeannie to learn the hard
way what happens when you follow your heart. Now Jeannie is shocked to find that
the brigand she’s shot is the same man who broke her heart all those years
ago. But the hard, ruthless man is nothing like the charming young scoundrel she
remembers. When their attempt to prove Duncan’s innocence uncovers a deadly
secret, not only their lost love, but their lives hang in the balance.
Click here to read an excerpt of this book.
*******************************************
Let me tell you I FREAKING LOVED this trilogy.  I tremendously enjoyed each and every one of these books.  I have to say Highland Outlaw became one of my top 5 favorite books and can I just tell you that Patrick is my boyfriend.  LOL!  Dude seriously had me wanting to find a time machine to go back and be Elizabeth.  Each of the heroes in these book were strong, caring, and freaking rocked my world.  I really enjoyed heroines of this one.  Another great set of heroines to cheer for.
If
you are interested in winning this trilogy leave a comment below.  Be
sure to include your e-mail address if it’s not on your profile.  The
contest is open until Sunday, Jan 9th.  Make sure to come back Thursday for more giveaways plus Monica McCarty will be here so stop by and say hello.  Also if you missed the previous trilogy giveaway click here so you can enter for a chance to win the MacLeod trilogy.  Good luck and happy reading.