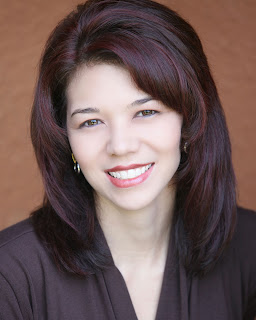 Hey guys!  I would like to introduce a new author to you today. Kristina McMorris resides in the Pacific Northwest with her husband and
their two sons, bundles of energy who take pride in transforming any
cylindrical household object into a weapon.

At age nine, she began creatively expressing herself when she embarked
on a five-year stint as the host of an Emmy- and Ollie award-winning
kids’ television program. Being half Japanese, Kristina jokes that she
discovered a genetic kinship with the camera and continued to nurture
that relationship by acting in numerous independent films and major
motion pictures while living in Los Angeles. Most recently, as the
former owner of a wedding/event planning business, she fed her
performance addiction by serving as the six-year host of the WB’s weekly
program Weddings Portland Style.

In fall of 2000, deciding sleep was highly overrated, she compiled
hundreds of her grandmother’s favorite recipes for a holiday gift that
quickly snowballed into a self-published cookbook. With proceeds
benefiting the Food Bank, Grandma Jean’s Rainy Day Recipes sold
at such stores as Borders and was featured in a variety of regional
media. It was while gathering information for the book’s biographical
section when Kristina happened across a letter her grandfather mailed to
his “sweetheart” during his wartime naval service – a letter that later
inspired McMorris to pen her first novel, a WWII love story entitled Letters from Home.

If you guys haven’t read my review of Letters from Home be sure to check it out.  The story of how I discovered Kristina and my gushing about how much I love her debut novel is written all in my review.  Now sit back and relax and enjoy my Q&A session with Kristina.

Kristina: Thanks for having me here!
In short, the story is about an infantryman who, in the midst of WWII, falls deeply in love through a yearlong letter exchange, unaware that the girl he’s writing to isn’t the one replying. Equally sharing the spotlight are three female friends whose journeys toward independence take unexpected turns as a result of romance, tragedy, and deception—and ultimately, the repercussions each of them face from their choices.
Ing: I really enjoyed the story about how this book came about.  Could you please share with the readers of my blog this wonderful story?

Kristina: I’d be happy to! Several years ago, I was creating a Christmas present for the family, a self-published cookbook featuring recipes my grandmother had collected and created over decades. While interviewing her for the biographical section, she began to talk about her courtship with my late grandfather. That’s when I discovered, much to my amazement, that they had dated only twice before getting married, as their relationship had developed almost entirely through an exchange of letters during World War II. Grandma Jean then retrieved from her closet a gorgeous stack of those very pages, each one full of the love and hope that had helped carry them through such an uncertain time. 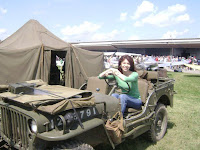 After leaving her house, I continued to think about those letters, and wondered how different their relationship might have been if their correspondence had been anything less than truthful. This thought soon became the core idea of LETTERS FROM HOME.

I love how you incorporated the other main character in my opinion which is the “Letters” into this novel.  Each character is impacted one way or another by a letter.  Were any of the contexts of the letters especially the ones exchanged between Elizabeth and Morgan from letters that your grandparents exchanged or were they all from your wonderful imagination?

Kristina: Most of the letters in the book were created from my imagination, with bits and pieces of my grandfather’s messages sprinkled throughout. I also drew inspiration from a great number of WWII letters I found in memoirs and online collections. I never grew tired of reading such special correspondence.

There were many memorable moments in this book that either had me chuckling or breaking out a box of tissue!  What was a scene that stood out or was memorable for you when writing Letters from Home?  Why did this scene stand out for you?

Kristina: Oh boy, this is a tough one to answer without giving away too much. Aside from the most obvious scenes, I’d say it was when a mother, who actually plays a very small role in the story, faces the fact that her warm, fun-loving family will never fully recover from the tragedies of war. Given that I’m a mother of two sons, just like the character, this scene strikes a chord every time I read it.

I’m sure there was a lot of research that went into writing this book.  Was there anything interesting that you discovered during your research that either surprised, thought was odd or funny? 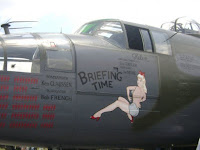 Kristina: I did my best to slip in historical tidbits that intrigued me whenever the story permitted without being obtrusive, such as the origin of Jungle Juice in the Pacific Islands and the use of snowsuits by German soldiers for camouflaging themselves during the winter. I’ve definitely become a 1940’s phone-a-friend!

There were some characters that I was drawn to and am really hoping you’ll write a story for them someday like Jack Callan, Ian, Betty or Julia.  Any plans for a book for them?

Kristina: I hate to disappoint you, but for the time being, I don’t have plans to continue any of their storylines. But then, I never planned on becoming a novelist either—and look what I’m doing! So, you never know. 🙂

Which of the girls (Elizabeth, Julia or Betty) would you say you are most like and why?

Kristina: If I had to choose one, I’d say…Elizabeth. I’m a career-driven woman, like Liz, but I also love being a mother. It’s a constant juggle, for sure. In that regard, I’ve got a good amount of Julia in me as well.

I think Letters from Home would make a great movie.  If you could pick your dream cast who would you have star as each character and why?

Kristina: Ooh, the movie cast question… It’s such a fun thought, and I wish I could provide an equally fun answer. But honestly, since I created the characters in my mind, I have trouble picturing any specific actors or actresses in their roles. That’s not to say I wouldn’t love to see the story played out on the silver screen one day!

What is next for you?  Any future project you can tell us about?

I’m very eager to share this one with readers, as it features some shocking aspects of history that most people have never heard about, as well as heroes who are too often passed over. Also, being half Japanese, I was able to infuse a unique perspective of living between worlds.

Ing:  Now on to questions about you. We want to know more about Kristina McMorris. What are your favorite books of all time? 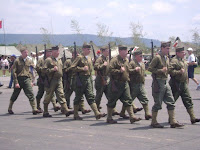 Kristina: Some of my favorites include The Book Thief by Markus Zusak, Water for Elephants by Sara Gruen, The Help by Kathryn Stockett, Those Who Save Us by Jenna Blum, and The Kommandant’s Girl by Pam Jenoff. See a commonality here? I’m obviously drawn to historical fiction more than other genres.

Ing: Any movies you’ve seen lately that you would recommend? Or TV shows that you love right now and don’t ever miss?

Kristina: Sadly, with two young kids, I rarely get to watch any films that aren’t animated these days, lol. Therefore, it was a huge thrill to see Inception in the movie theatre last year. I was absolutely blown away. Since I have a film background, I kept thinking, How were any of these actors able to follow the story by reading this on paper?!

What have been some of your favorite places to visit and why?  What places do you want to go next that you haven’t been to?

Kristina: My favorite places to visit are all in western Europe. I was fortunate enough to live in Florence during my college years, and therefore had the luxury of traveling to incredible cities every weekend by train. Among the ones I love most are Florence, Venice, and Paris. They’re going to be hard to top.

If you could go back to your younger self what would be the one advice you would give yourself? 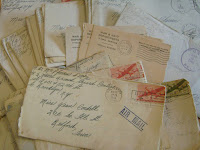 Ing:  If you weren’t writing what else would you be doing right now?

Kristina: Well….since it’s nearly 3am while I’m typing this, my answer would have to be “sleeping.”

Kristina thanks so much for stopping by today!  I really appreciate you answering all these questions.  Congratulations again and I hope you enjoy the ride.  I wish you the best of luck and can’t wait to read your next novel.  Do you have any last words or questions you would like to pose to the readers of this blog?

Kristina: Continuing from the question about movie casting, was one of your favorite books ever turned into a film? How did you feel about the result? Would you have cast it differently? Which book do you most wish would be adapted for the screen?

To learn more about Kristina and her debut novel click on the following links:

I recommend you explore her website.  She has a great EXTRAS page where you can read snippets of he letters that her grandparents exchanged.  These are the letters that inspired Letters from Home.

Check out this video below.  Kristina discusses Letters from Home. 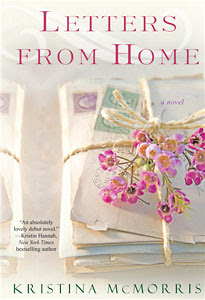 Read an excerpt of the book HERE
Cover Blurb:

In love and war, nothing is as it seesm…

Chicago, 1944. Liz Stephens has little interest in attending a USO
club dance with her friends Betty and Julia. She doesn’t need a
flirtation with a lonely serviceman when she’s set to marry her
childhood sweetheart. Yet something happens the moment Liz glimpses
Morgan McClain. They share only a brief conversation – cut short by the
soldier’s evident interest in Betty – but Liz can’t forget him. Thus,
when Betty asks her to ghostwrite a letter to Morgan, stationed
overseas, Liz reluctantly agrees.

Thousands of miles away, Morgan struggles to adjust to the brutality
of war. His letters from “Betty” are a comfort, their soul-baring
correspondence a revelation to them both. While Liz is torn by her
feelings for a man who doesn’t know her true identity, Betty and Julia
each become immersed in their own romantic entanglements. And as the war
draws to a close, all three will face heart-wrenching choices, painful
losses, and the bittersweet joy of new beginnings.