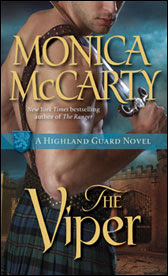 Book 4 of the Highland Guard series
Cover Blurb:
The war for Scotland’s sovereignty rages on—as Robert the Bruce
is crowned king and the Highland Guard, his elite fighting force of
legendary warriors, battle for land… and love.
Prized for his snake-like stealth and deadly strikes, Lachlan “Viper” MacRuairi
is a warrior to enlist but not to trust. His only loyalty is to his
purse, his indifference sealed by bitter betrayal. All that changes when
Lachlan is tasked to protect and deliver Bella MacDuff
to the king’s coronation—and the proud, lushly sensual countess
unwittingly challenges him to his greatest battle yet: to love again.

Passionate and devoted, Bella has defied Britain’s king and her own
husband to place the crown on Bruce’s head—and pays a terrible price.
She loses her daughter and her freedom to her husband’s vengeance.
Imprisoned with barbaric cruelty, she vows to reclaim her child, even if
it means selling her soul—and her body—to a dark, lethal warrior whose
eyes glint like steel, but who makes her skin tingle and her breath
race. Together they embark on a rogue mission with sinister twists and
turns that threatens not only Bella’s gamble to save her daughter—but
also her heart.

Monica McCarty is my crack for Highlander romances. I adore, love, worship..etc this author. She was the answer and replacement for Julie Garwood when Julie stopped writing highlander romance! If you haven’t heard or read her books I highly recommend!  She wonderfully weaves historical events and figures into her romance novels. Her upcoming release is the The Viper which is the fourth book in Highland Guard series. The cover just went up for this book and I had to share!  It’s eye candy goodness I tell you! I seriously want to lick his arm! Anywhoo-check her out if you haven’t and check out this series if you haven’t! It’s been described by Monica McCarty as Suzanne Brockman seal books meet Braveheart! 🙂 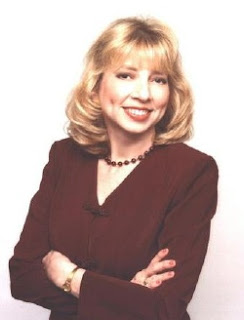 Then the wonderful Teresa Medeiros recently gave us a peek at her upcoming release.  I enjoy her books and this one sounds like another good one!  No cover yet but here’s the blurb.

The Pleasure of Your Kiss
Coming January 2012

Ashton Burke is a legendary adventurer who has spent the past ten years roaming the globe to forget the girl he left behind. His devil-may-care life is interrupted when he’s hired to rescue his brother’s kidnapped fiancée from a sultan’s harem. Too late, he discovers she is none other than Clarinda Cardew, the very same girl who made off with his jaded heart a decade ago.

The last thing Clarinda wants is to be trapped in a palace of sensual delights with the man whose irresistible kisses still haunt her sleepless nights. Although he vows he is only doing his job, Clarinda quickly realizes that allowing Ashton to rescue her may put her yearning heart in even greater peril. In a journey that takes them from the delicious intrigues of a sultan’s court to the glittering ballrooms of London, Ashton and Clarinda resume the steps of their dangerous dance only to discover the most seductive pleasure of all may be love itself. 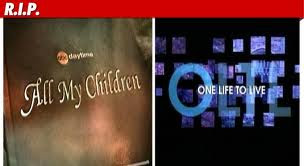 And for those of you that haven’t heard ABC just announced that they are canceling the long running Soap Operas “All My Children” and “One Life To Live”.  I haven’t watched these soaps in awhile but I grew up watching them both and this news sadden me. Goodbye to Erica Chandler and Vicki Buchanan.  Do any of you still watch soaps out there?  I will occasionally watch General Hospital still.
Anyways that’s your news this Saturday! Everyone have a good weekend!

7 Responses to “COVER REVEAL – THE VIPER BY MONICA McCARTY, TERESA MEDEIROS NEWEST BOOK INFO AND THE END OF AN ERA”