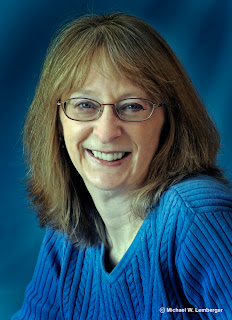 Good morning peeps of the blog!  Please help me welcome author Leigh Michaels to ATPT. Leigh is the author of nearly 100
books, including 80 contemporary novels and more than a dozen non-fiction
books. More than 35 million copies of her romance novels have been published by
Harlequin. A 6 time RITA finalist, she has also received two Reviewer’s Choice
awards from RT Book Reviews, and was
the 2003 recipient of the Johnson Brigham Award. She is the author of On Writing Romance, published in January
2007 by Writers Digest Books. Leigh also teaches romance writing on the
Internet at Gotham Writers’ Workshop.
She lives in Ottumwa, Iowa, where she is working on her third book from
Sourcebooks, The Wedding Affair, which
will be in stores in September.
Leigh is here to tell us about her latest release, Just One Season in London. In her latest release we the readers again are in for a treat with three romances in one book.  Count them not one, not two but three. Now read on for our Q&A session below. You’ll get a chance to win a copy of this book today. Read further for details on the giveaway!
*********************
Ing:
Welcome to ATPT Leigh! Can you tell the readers a bit about your latest release
Just One Season in London? What can
they expect plot, pace, sex, etc?

Leigh:
Young
Viscount Ryecroft has a beautiful sister to marry off – but no money to fund a
London Season for her, so perhaps he needs to find an heiress for himself
first. Sophie Ryecroft is willing to marry for the good of the family – but she
can’t meet the sort of man Rye has in mind for her except in London. Rye and
Sophie’s mother, Miranda, will do anything for the sake of her children – even
taking up again with a man she knew long ago and  offering to be his mistress. And they have Just One Season in London to make their
dreams come true.

Leigh:
The
Ryecroft family is unusual – especially for the Regency era when children of
aristocratic families were often raised by nurses rather than by their parents
– because Miranda, Rye and Sophie love each other so much that each one of them
is willing to sacrifice his or her own happiness in order to make certain the
other two are happy. Marrying for money isn’t a selfish goal in this case, and
that makes them an appealing family.

Ing:
Now can you tell us a bit about the love interest(s) for the Ryecroft
family?  What about Portia, Marcus and
Robert do you believe will draw the readers and make them love these
characters?

Leigh:
Portia,
Marcus, and Robert each have a sense of humor and a grasp of irony which makes
them ideally suited for a book of this sort – since it’s almost a comedy of
errors to see who will end up with whom.

Ing:
Why are these couples perfect for each other? What about them individually
makes them so drawn to each other? Why do you think the readers will fall in
love with this couple?

Leigh:
For Miranda and Marcus, it’s a chance to
finally get things right – to have the lasting love which escaped them when
they were youngsters. For each of the other two couples, it’s a slow journey to
realizing how very much they have in common, despite their surface differences
and (in Sophie’s case) despite society’s rules.

Ing:
What was a scene that stood out or was memorable for you when writing Just One Season in London? Why did this
scene stand out for you?

Leigh: I loved writing the
scene where Sophie runs off with her brother’s horse and takes off madly across
the park, chasing down the man she loves. Sophie’s a determined young woman, and
sometimes her common sense takes a back seat. Would he really drive away forever without seeing her again? Sophie doesn’t
stop to think; she just goes after what she wants. But honestly, there are 66
scenes in the book and I loved writing each one of them.

Ing:
I like knowing and hearing the back story about how a book comes about. Can you
tell us where the idea for this book came from? Also this book is the second
book in a series?  Do the readers need to
read the previous book first and how many books are you planning for the
series?

Leigh:
Each
of my historical romances, The Mistress’
House, Just One Season in London,
and The Wedding Affair, is a
stand-alone book. There is one secondary character who appears in all three of
the books, but the only other thing the books have in common is that each
involves three heroes and three heroines – three love stories in a single volume.
When I first started plotting Just One
Season, I thought it would involve a mother and two daughters, until Rye
rose up off the page and demanded a full share in the story.

Ing:
Can you tell us what you have up your sleeve next? What else can we look
forward to from you for the rest of 2011 and possibly 2012? Any sneak peek on
these upcoming projects?

Leigh:
The Wedding Affair comes out in
September 2011. The Duke of Somervale’s sister is to be married at his country
estate, and half of England is invited. But the guests have much more than the
wedding on their minds. Vicar’s daughter Kate Blakely is desperate for a job
that will let her escape… Wife-of-convenience Penelope Townsend hopes to use
her stay at the duke’s estate to seduce her husband… and poverty-stricken widow
Olivia Reyne is determined to secure her daughter’s future, even if that means
letting the duke pretend to court her. Meanwhile, the duke himself is dodging
the bridesmaids who are stalking him.

Ing:
Who is a character that you get a lot of e-mails about that you have not
written a story for yet? Will you or do you have plans for these popular
characters?

Leigh:
With
three heroes and heroines in each book, I don’t have a lot of room to develop
secondary characters who might someday need a story of their own. But I think
readers of the first two books will be tickled to see what happens to busybody
Lady Stone in The Wedding Affair.

Ing:
Now on to questions about you. We want to know more about Leigh Michaels. Who
are some auto buy authors that you read now?

Leigh:
Between
my teaching schedule and my own writing, I don’t read as much fiction as I would
like. My former (now published) students – people like Roxanne Rustand and
Rachelle Chase – are automatic buys, and I read cozy mysteries and some fantasy,
along with resource materials like non-fiction books and magazines.

Ing:
What was the first romance book you ever read? Do you still have the book on
your shelf?

Leigh:
I
don’t recall the title but the book was a Harlequin Romance about a marriage of
convenience. I was maybe 12, and I recall thinking the story was incredibly
racy. Now it wouldn’t even nudge the spice-o-meter up a single notch – I think
the hero and heroine kissed once.

Ing:
Any movies you’ve seen lately that you would recommend? Or TV shows that you
love right now and don’t ever miss?

Leigh:
In
movies, I love romantic comedies, and I keep going back to Love Actually when I want a feel-good evening. My favorite
television shows help me escape – House, Grey’s Anatomy, Bones (hmm, all those
are medical. What does that say about me?). I also like off the wall stuff like
Eureka.

Ing:
If you could go back to your younger self what would be the one advice you
would give yourself?

Leigh:
Don’t
speed through college to get your degree in three years. Take your time (and
all the extra classes you can fit in) instead.

Ing:
If you weren’t writing what else would you be doing right now for a career?

Leigh:
My degree is in journalism, so I imagine I’d
be working at a newspaper or magazine. Maybe editing and producing books.

Ing:
I really appreciate you stopping the blog, Leigh. Hopefully you had fun!  I wish you much success with this series. Do
you have any last words or questions you would like to pose to the readers of
this blog?

Leigh: Thank you, Ing! And
as for a question – There are so
many interesting historical periods, but most historical romances are set in
the Regency, Georgian, and Victorian eras. Which other time periods would you like to see used as settings for
historical romances?

*********************
You are in luck if you are interested in reading Just One Season in London by Leigh.  The lovely folks from Sourcebooks is offering TWO copies to give away. If you’d like to win a copy of this book see the rules and details below to enter.
Rules and Details for Giveaway:

To learn more about Leigh Michaels and her other books check out her website http://www.leighmichaels.com 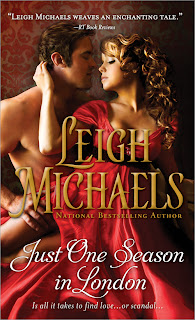 Cover Blurb:
Meet the Ryecrofts…the family that courts together.

RYE — Viscount Ryecroft is a young man with a problem. Make that two problems: He has a beautiful sister to marry off — but no money to fund a London Season for her. Perhaps he needs to find an heiress for himself first?

SOPHIE – Miss Sophie Ryecroft is willing to marry for the good of the family — but since she can’t meet the sort of man Rye has in mind for her except in London, she’s looking for alternatives.

MIRANDA — Rye and Sophie’s mother, the dowager (but still young) Lady Ryecroft, will do anything for the sake of her children — even taking up again with a man she knew long ago, and  offering to be his mistress.

Only in London can the Ryecrofts find their destinies…