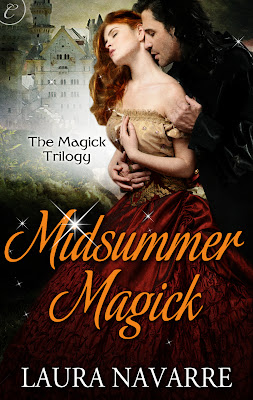 
The Virgin Queen’s Court whispers about shy scholar Lady Linnet Norwood, who spent a year and a day trapped in the Faerie realm and returned as a ruined woman. Linnet, however, is not yet free of magick. Otherworldly forces plot to use her to incite a bloody uprising that will twist the fates of mortal and Faerie realms alike.


Exiled angel Zamiel wavers on the edge of accepting an offer from his fallen father to become Prince of Hell. Lucifer knows Lady Linnet’s significance, and urges his son to pursue and protect her for sinister ends.


As Linnet flees those who would make her a pawn, Zamiel follows, tempting her trust and her passion. But the more he employs his killing rage on her behalf, the more he dreams of laying it aside in favor of peace.


If the two can find faith together, they might sunder the unholy alliance that threatens the dawn of the Golden Age of England.

I’m a beauty freak. I admit it. But with a historical twist. Some readers identify most with the ugly duckling heroine—but not me. I want my romance heroine to be freaking GORGEOUS. I want her so gorgeous she blows her hero’s boots off. And I want my readers to feel gorgeous themselves.


So of course I created an absolute stunner in Lady Linnet Norwood, a half-royal Scottish princess at the Tudor court in MIDSUMMER MAGICK, Book Two of my Magick Trilogy for Harlequin/Carina. Picture a tumbled riot of fire-streaked mahogany curls, sherry-gold eyes, and an Angelina Jolie body squeezed into a corset and gartered stockings.


Of course, Linnet has a leg up on her competition. She has Faerie blood and Faerie magick, like Elizabeth Tudor and Anne Boleyn before her—and that’s one beauty secret you absolutely can’t spill! Because Linnet’s already the whispered scandal of the Tudor court. And if the Catholic faction sniffs out Elizabeth’s secret, the young queen will lose her throne.


Linnet has a little more than fashion on her mind these days. She’s fallen hard for a sexy, mysterious exile who’s thrown the whole Tudor court in an uproar. She has no idea Zamiel, Lord of Briah, is actually a fallen angel and the Son of Lucifer. In fact, he’s the Angel of Death. His touch is lethal. He can kill with a kiss. But that’s Zamiel’s problem—because once he sees Linnet, he HAS to have her.


So you’re a newcomer to the Tudor court, visiting from the twenty-first century, gossiping with the scandalous Lady Linnet because you’re a bit of a scandal yourself. And because she likes you, she’s going to spill her beauty secrets. Are you ready?


1.  Moisturizer: Begin your beauty ritual, as always, with a good cream or unguent to soften your skin. Honey, beeswax and sesame seed oil are among your choices.

2.  Hair:  Most days, a bath is out of the question. Ask your maid to rub your hair clean with “rubbers”—which are fine linen cloths. And forget about your hairbrush. They won’t be in common use for another two centuries. The comb is your best friend. But take heart! Artificial curling and coloring are two beauty rituals your Tudor maid has mastered.

3.  Cosmetics: You’ll definitely want them here. The perfect Tudor beauty has snow white skin, red cheeks and lips. Use an unguent like ceruse the way you’d use foundation, to even out the skin tone along your face, neck and cleavage. (Also handy for covering smallpox scars, just in case. Caution: could give you lead poisoning.) Use a red ocher rouge to add color to your cheeks and lips. Paint your nails with henna.


4.  Fragrance: Choose from your collection of jeweled glass bottles something dramatic like ambergris or civet, or something softer like violet or rose. You can also fill a stylish pomander with petals and herbs and carry it from a silk cord at your waist.


5.  Depilation: As a matter of aesthetics, you’ll want to remove your body hair, at least any unattractive tufts in the armpits and bikini area. You’ll find a “shaving room” here and in many Renaissance castles for this purpose. Don’t forget to pluck your eyebrows! I’d also advise plucking the hair along your hairline to give you a higher brow.
There’s so much more Lady Linnet wants to tell you! But she’s being summoned by the queen. And that impudent rogue Zamiel is brimming with secret mischief. Like to find out why? Join the adventure here. 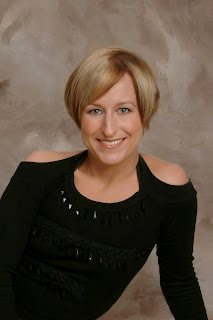 In her other life, Laura Navarre is a diplomat who’s lived in Russia and works on weapons of mass destruction issues. In the line of duty, she’s been trapped in an elevator in a nuclear power plant and stalks the corridors of facilities churning out nerve agent and other apocalyptic weapons. In this capacity, she meets many of the world’s most dangerous men.


Inspired by the sinister realities of her real life, Laura writes dark Tudor and Renaissance romance with fantasy elements. A member of Romance Writers of America, a Golden Heart finalist and winner of the 2012 Pacific Northwest Writers Association award for romance, she’s currently writing The Magick Trilogy, a series of dark Tudor romances with elements of Arthurian legend and fallen angel heroes, for Carina Press. Coming next in this award-winning series is Midsummer Magick in August 2013.


Living on an island in Puget Sound with her screenwriter husband and two Siberian cats, Laura divides her time between her writing career and other adventures for government clients. 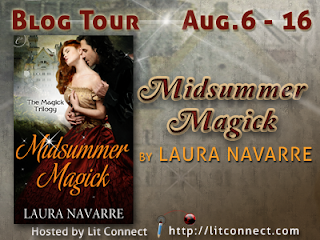