Katy knows the world changed the night the Luxen came. She can’t believe Daemon stood by as his kind threatened to obliterate every last human and hybrid on Earth. But the lines between good and bad have blurred.

Daemon will do anything to save those he loves, even if it means betrayal. But when it quickly becomes impossible to tell friend from foe, and the world is crumbling around them, they may lose everything to ensure the survival of their friends…and mankind.

She’s protecting his body and guarding her heart….

Country music star Devin McClain understands there’s a downside to life in the public eye, but the laidback Wyoming cowboy has never imagined he’d attract crazed fans who would do anything to garner his attention. When veiled threats become real, he agrees to hire a discreet security detail. But Devin is shocked when that bodyguard is a hard-bodied woman. He’s even more stunned to be attracted to the steely-eyed stunner.

Former soldier Liberty Masterson’s return to civilian life has been fraught with challenges until she lands a job with a prestigious security firm. But when she agrees to provide personal protection during a cross-country tour, she doesn’t realize she has signed up to masquerade as the playboy star’s girlfriend. Though she’s more comfortable in combat boots than high heels, she has no choice but to appear to be the sexy groupie Devin prefers.

Living in close quarters causes the chemistry between them to ignite, and Devin realizes he wants to turn their charade of a romance into reality. Although Liberty surrenders to his every whim behind closed doors, she fears the sexy country star doesn’t see the real her; and Devin can’t help but worry when the tour ends that there might not be enough between them to build something that won’t fade away….

Chessy and Tate have been married for several years. In the beginning, their relationship was everything she wanted. Passionate. All consuming. She offered her submission freely and Tate cherished her gift with a tenderness that made her feel safe. Content. Wanted. And loved beyond all measure. But as the years have gone by, Tate has become more immersed in making his business the success it has become, and Chessy has taken a back seat to his business obligations. Growing unhappier with the status of their once blissful marriage, Chessy knows that something has to give. Or they stand to lose it all

Tate loves his wife. Has always loved her. Providing for her has always been his number one priority. But lately she’s seemed unhappy, and he’s worried. Worried enough that he arranges for a night together that he hopes will reignite the fire that once burned like an inferno between them.

But a business call at the wrong time threatens everything. Chessy’s safety, his concentration, his wife’s faith in him as her husband, a man sworn to love and protect her above all else. Gutted with the realization that he’s going to lose her—has alreadylost her—he readies for the fight of his life. Whatever it takes, he’ll get her back. And prove to her that nothing is more important than her love. And that if she’ll allow him to prove himself one more time, he’ll take it all. Everything. But he’ll give far more back. Himself. His undying love.

Backbreaking days, wild nights, and the hard hum of steel between your thighs…

That’s a life well lived, according to the Desert Dogs—four friends who call Fortuity, Nevada, their badlands home.

Vince Grossier is the self-crowned outlaw king around here. But when Fortuity’s slick new mayor invites a shady casino development to town, the invaders’ cutthroat takeover tactics quickly turn deadly. With police turning a suspiciously blind eye, it’s up to the locals to fight back, and Vince is on the front line. The pretty photographer hired by the developers might be the key to infiltrating the enemy. And a temptation too good to pass up.

Finally free of a controlling ex, Kim Paget’s not looking to be taken for a ride—not on the back of some tattooed roughneck’s bike and definitely not in his bed. But when she finds evidence that her bosses are rattlesnake-dangerous, Kim must entrust her safety to the man who threatens danger of a whole different kind.

Shelter Me (Second Chance Ranch, #1) → Amazon • B&N
Nestled in the sunny fields of Tennessee lies the McDaniel family’s Second Chance Ranch Animal Rescue. Two new arrivals are on their way, but only one is the four-legged kind.
Staff Sergeant Mike Kowalski wants only one thing after he gets home from Iraq: to sleep in a king-sized bed with clean sheets. But first, he has to hand off his fallen commander’s dog, Trooper, to his family without handing off his heart to Sierra…
Sierra McDaniel needs a break. Her family life is crazy, and when she’s not mucking out kennels, she’s slogging through grad school. Sierra certainly doesn’t want another dog, especially one that reminds her of her father. And she definitely doesn’t want to see Mike with that charming smile of his…
But Trooper has a mission of his own. Before too long Mike is moving to the ranch to lend a hand—and hoping for his own second chance with Sierra.
•••••

Dark Skye (Immortals After Dark, #15) → Amazon • B&N
Eternal Obsession
As a boy, Thronos, prince of Skye Hall, loved Lanthe, a mischievous Sorceri girl who made him question everything about his Vrekener clan. But when the two got caught in the middle of their families’ war, tragedy struck, leaving Thronos and Lanthe bitter enemies. Though centuries have passed, nothing can cool his seething need for the beautiful enchantress who scarred his body—and left an even deeper impression on his soul.
Endless Yearning
Lanthe, a once-formidable sorceress struggling to reclaim her gifts, searches for love and acceptance with all the wrong immortal suitors. But she’s never forgotten Thronos, the magnificent silver-eyed boy who protected her until she was ripped from the shelter of his arms. One harrowing night changed everything between them. Now he’s a notorious warlord with a blood vendetta against Lanthe, hunting her relentlessly.
Can the heat of desire burn brighter than vengeance?
With their families locked in conflict and battles raging all around them, will Thronos and Lanthe succumb to the brutal chaos that threatens everything they cherish? Or will the fragile bond they formed so long ago spark a passion strong enough to withstand even the darkest doubts?
•••••

The Highlander’s Bride Trouble (The Sutherlands, #4) → Amazon • B&N
Her clan is in chaos…
Raised by her father and brother, Nareen Grant is strong, confident, well-educated-and skilled with a bow and dagger. It’s a tumultuous time for Scotland, and events conspire against her. Betrayed by her family, she makes her way alone, until she lands in the lap of Saer MacLeod. But she wants no help from a savage man of the Isles.
And rivalries are deadlier than ever
Raised on the rugged Scottish Isles, Saer MacLeod is considered fierce even by Highlander standards. He’s enchanted by the independent and headstrong Nareen. But when an old feud endangers her life, Saer’s fascination with her escalates into a ferocious desire to protect her… and claim her for himself.
•••••

Offside → Amazon • B&N
I have to be the best. I am the best. I’m quick. I’m strong. I’m smart. I’m the star keeper of my high school soccer team, and I’ve got major leagues scouting me. As their captain, my teammates will do anything I say – on or off the field. Girls practically beg to be added to my list of conquests. As long as I manage to go pro for the best team in the world, I won’t have to worry about my father’s wrath.
I’m Thomas Malone, and I’ve seen to it that the world revolves around me.
There’s a new girl at school, and it’s just a matter of time before she gives in to my charm. This one’s just a little more stubborn than most – she won’t even tell me her name! She’s smart, too. Maybe too smart. I can’t let her in. I can’t let anybody in. I’m not too worried, but even I have to admit she’s interfering with my focus on the goal.
Dad’s not going to be happy about that.
Did I mention I love Shakespeare? Yeah, I know. I’m a walking contradiction. According to the Bard – “some are born great, some achieve greatness, and some have greatness thrust upon them.” Somehow, I got all three.
Now how is anyone supposed to live up to that?
•••••

Temptation (Club X, #1) → Amazon • B&N
Cassian March, the public face of Tampa’s most exclusive nightspot, Club X, has a great life. Women, sex, and money are his for the taking, and no man indulges his desires more. Life is short, and he plays hard. He lives by only one rule—never let a woman get close.
Olivia Lucas needs a job, and if that means working at a club that specializes in making members’ wildest fantasies come true, then that’s what she’ll do. A girl’s got to pay the rent, right? She never expected to fall for the gorgeous owner of Club X, though, but a man like him would never go for someone like her. Or would he?
••••• 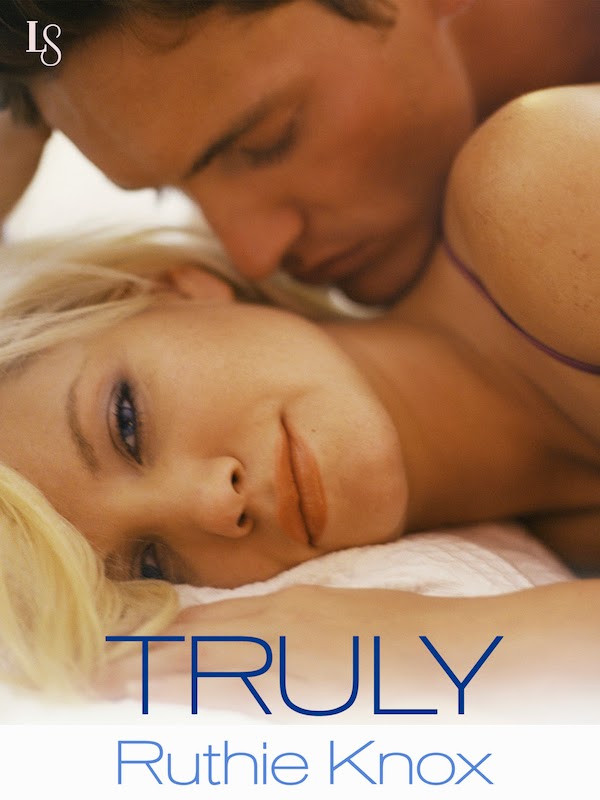 Truly (New York, #1) → Amazon • B&N
May Fredericks hates New York. Which is fair enough, since New York seems to hate her back. After relocating to Manhattan from the Midwest to be with her long-distance boyfriend, NFL quarterback Thor Einarsson, May receives the world’s worst marriage proposal, stabs the jerk with a shrimp fork, and storms off alone—only to get mugged. Now she’s got no phone, no cash, and no friends. How’s a nice girl supposed to get back to safe, sensible Wisconsin?
Frankly, Ben Hausman couldn’t care less. Sure, it’s not every day he meets a genuine, down-to-earth woman like May—especially in a dive in the Village—but he’s recovering from an ugly divorce that cost him his restaurant. He wants to be left alone to start over and become a better man. Then again, playing the white knight to May’s sexy damsel in distress would be an excellent place to start—if only he can give her one very good reason to love New York.
•••••

When You Were Mine (Moreno Brothers novella) → Amazon • B&N
When her head was screaming “enough,” her hopeful heart continued to whisper “wait.”
It’s the only way Valerie Zuniga can justify her ongoing addiction to the amazing but ever, elusive Alex Moreno. Mesmerized by the profound connection neither has ever quite understood, Valerie accepts their crazy relationship for what it is—non-exclusive.
That is until the incredible highs no longer numb the sting of the intense lows.
As tasteless and slippery as pride can be, for Alex it’s always been the hardest pill to swallow.
Faced with a final ultimatum, the choice is a no-brainer for Alex. Despite his insanely busy life he’s determined to prove to Valerie, that not only is he ready to commit, it’s what he’s always wanted—to claim Valerie as his exclusively.
But just as it kept him from admitting his real feelings all those years, will his obstinate pride once again step in and ruin things just when they’re finally getting it right?
•••••